Oh Solon, Solon! You the Greeks are always children, there is no a Greek old man. These words were said by an old priest of the city of Sais, in the Nile delta, to one of the Greece Seven Sages six centuries before Christ. Twenty six centuries later, in the maelstrom of modern Greek capital, almost nobody remember Solon and even less the one of Sais.

The Egyptian priest reproached the Greeks to be unable to remember their history and traditions, in spite of the arguments made by Solon recalling oldest facts: the arrival of the first man, Foreneo, son of god Inachus and a Nymph, and about how life evolved after the Great Flood. The Sais priest had to remind Solon Great Flood wasn’t the first. It had rained more often and more floods had fallen and more earthly destructions and reconstructions had happened in this world, like the one of Atlantis. Solon was instructed in the philosophy that drove the government of the western island and how time itself caused his misfortune and his loss to the Greeks themselves. A couple of centuries later Plato wrote in his dialogues Timaeus and Critias the information transmitted by Solon. 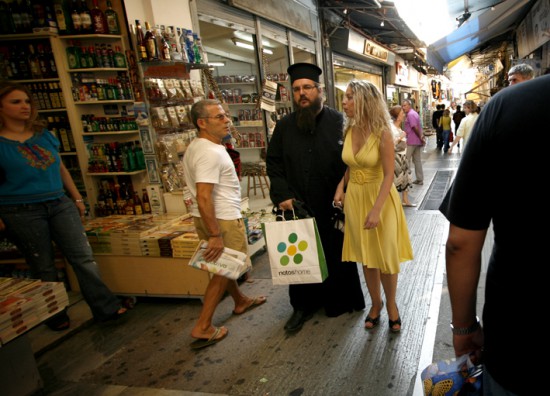 The dialogues, where Socrates, Hermocrates, Timaeus and Critias do intervene, were developed in the Athenian Agora, not far from the Acropolis, now packed with tourists. Around spread the ancient Greek polis which lost its power and part of his greatness after the fall of the Eastern Roman Empire. In times of Byzantium, Athens was turned into a remote provincial city that did not improve after the rule of Normans, Venetians, Catalans and Turks. With independence the city regained the capital, now in the new European state, and began to overflow, first to current Syntagma and Omonia squares, then beyond, as if Attica had no limits. From the airplane window, when it start the descent to the modern airport named after the father of the new country Eleftherios Venizolos, Athens appears as an endless white surface which occupies the territory moving in any direction, except the south where Piraeus harbour and the sea set up an end to the growing expectative. Athens is not Greece but the whole of Greece is in Athens, Greece insular particularly when the summer season ends and tourists retire and sent back to all those who no longer have jobs in the islands.

In the nineteenth century, due to not very different reasons, also emigrated from their island, Anafi, much of its inhabitants. They settled around the Acropolis forming the neighbourhood now known as Anafiotika. Strolling throughout the neighbourhood looks like to be walking by Aegean white villages streets, but the fact is that its inhabitants whitewashed their houses in the same style as they did before in their island. Above its tiled roofs stands the Acropolis and its sacked Parthenon. Turks used it as a powder keg. So become a military objective and Venetians bombarded with admirable success. Along nineteenth century, what have not been destroyed neither by Turks nor by Venetians was sacked by Lord Elgin who moved to the British Museum complete metopes and friezes. Today the modern new Acropolis Museum has left more than enough room for a hypothetical return of Greek heritage, a good part of which is exhibited in the National Archaeological Museum on October 28 Avenue, in Exarcheia neighbourhood. Here are some outstanding collections of ancient Cycladic sculpture, the mask of Agamemnon and others, also golden samples of Mycenaean art, the frescoes of ancient Thera, now Santorini, the colossal bronze statue depicting Poseidon and the young rider on horseback. There are also the sculptures of the Aphaia temple in Aegina and numerous arrowheads and spear that were found at the scene of the famous battle of Thermopylae. 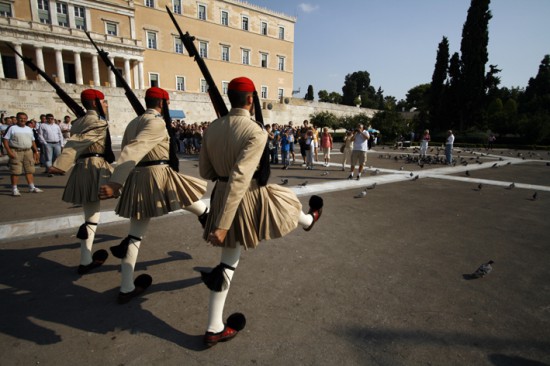 The districts of Kolonaki and Exarcheia are split by the mass of the Likavitos hill. A funicular eases the climb to the top where the church of Agios Georgios gives a fine panoramic view of the city facing the Acropolis. Under the latter extends the Plaka quartier taken by tourism and the reason is none other than the substantial restoration that has been done and some streets closed to traffic inviting to walk around filled with pubs, cafes and souvenir shops. Yet it has retained an atmosphere that makes it very pleasant. Most of its buildings were built in the nineteenth century though there are few older. Among them, on Adrianou Street, is the first public primary school in the city, a neoclassical building of 1875 inaugurated by then mayor Dimitrios Kallifronas.

Plaka is dotted with small old Orthodox churches that contrast with the relatively modern, was consecrated in 1862, Mitropoli, the Metropolitan Cathedral. Right next to it, in the same square, it is Mikri Mitropoli, the twelfth century ancient cathedral having considerably smaller dimensions. It’s doubly dedicated to Gorgeopikóös Panagia and Agios Eleftherios. In its external walls are reliefs from the reuse of Hellenistic, Roman and Byzantine old buildings materials. In Ermou Street, another traffic artery banned from the Olympics in 2004, is the Holy Church of Kapnikarea, dedicated to the Presentation of the Virgin in the Temple. The church was built in the early eleventh century upon an ancient sanctuary dedicated to the goddess Athena or Demeter. Ermou links Syntagma and Monastiraki squares. Syntagma is modern Athens political core whit the Parliament building and where all the demonstrations against the government are hold and where the Evzones, those soldiers looking like ballet dancers perform their spectacular changing of the guard at the tomb of the unknown soldier, where the bus to the airport stops and the subway. The same subway line that makes shake the frescoes of the Kapnikarea and which reappears in Monastiraki, next to the ancient Greek Agora, near the Stoa of Atalos rebuilt by the American School of Classical Studios where are displayed the objects unearthed in the area. There, Monastiraki Square is an eclectic architectural and social mix. There stands Kimisis Theotókou, the church of the Assumption of the Virgin, the remains of the ancient monastery that named the square, the old mosque Tzisdarakis, now a curious museum that houses Kyriazopoulos collection of ceramics, and the building rose in 1920 which is currently the metro station. To the left begins the flea market and many shops now inevitably oriented to tourism. 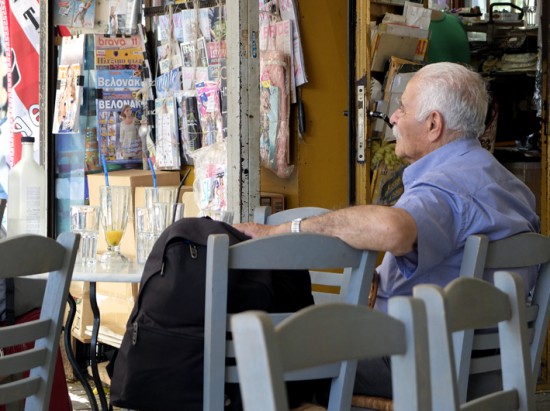 Meanwhile pedestrian crowds goes in and out Monastiraki tube station, some stop at coconut and peanuts stalls, others rest their feet in the shade of the old mosque before to delve into the pedestrian streets around the old Roman Agora, but probably would be better to seat in one of the many terraces that extend along the street. One among them, facing Ares temple, is peculiar because most of its customers are local, some of them move the beads of their komboloi, rosaries, between index finger and thumb. Ouzo flows with the same alacrity that frappe, the iced coffee they drink both summer and winter. Another good place to take a break, better in the evening, are the coffeshops just down Tripodon Street, near Lysicrates monument. Here the Acropolis has stunning night views.

City old name was made in plural, perhaps because there were several cities forged around the Acropolis. A plural that is not lost, either in the name or the characteristics of all those Greeces who populate Helen modern metropolis. 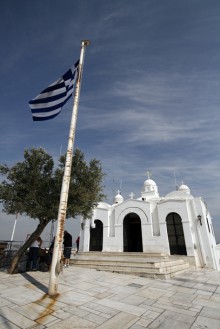