03/12/2021 10:14
I gently slide the palm of the hand on the green porphyry surface, as I saw other pilgrims done once walked the line that led to the Ark. I felt neither cold nor heat nor any strange feeling more than the actual feel of marble. I followed the path to the Madonna Mora Chapel towards the Relics...

13/08/2021 10:01
Being postman in Venice, or at least an inexperienced one, may be a kind of nightmare. Streets repeat with some regularity its names are not numbered consecutively. Corresponds, more or less, to the order in time when buildings were raised. The scheme is shared, with the same pattern in each city...

13/06/2021 10:50
Niccolò Tommasèo was a linguist, journalist and essayist, forerunner of the irredentist movement that advocated the incorporation of the eastern Adriatic territories to the 19th century Italy unification process. His featured work was the making of a comprehensive Italian dictionary. His nickname...

18/12/2020 10:36
Venier dei Leoni palace overlooks the Grand Canal waters between Da Mula Morosini mansion and the damn Ca Dario. It does not stand out precisely for its height, it is the only one on one floor among its neighbours, however, it houses an outstanding collection of contemporary art, that of Peggy...

24/05/2019 08:57
The night radically changes the appearance of Burano. With the last vaporetto returning to Venice disappear all the visitors who had filled the streets throughout the day. Those who wandered watching curious the windows offering the work of merletto; those who have tried the buranelli, the typical...

04/08/2017 09:10
Passengers board with the indispensable caution the walkway leading to the vaporetto after selecting the right stop at Piazzale Roma. There starts line 1, which runs unhurried along the showcase of all the vanities that grow up above the water reflections on the great aquatic avenue winding between...

12/09/2016 19:29
Venice historic centre urban grid has a well known peculiar features, common streets mixed with canals and waterways requiring to use marine navigation even for the most common public transport. Here, instead bus, they call it vaporetto. The ship approaches and seems ramming the floating dock that...

08/04/2016 17:26
Armenian people relationship with Venice comes from long ago, almost since the first days of the city when the ties with Constantinople were tighter. They had their own neighbourhood, later their own church and their island where an active community of monks dedicated to the books was established....

28/08/2015 10:47
Verona was an important Roman city wrapped in the waters of the river Adige; in the Middle Ages it joined the Lombard League and successive Lordships  turned it into a thriving market town that remained when joined the Republic of Venice. However, it is primarily known for the sad story of two...

A Greek Lion in Venice

23/08/2013 17:30
Venice is full of wonderful terraces where to stay quietly sipping coffee or spritz and meanwhile keep an eye on life passing by just in front. There is one which is peculiar enough, despite not having any notable feature, its metal tables are ordinary, the premises has no special charm that...

23/08/2013 17:20
Near Guglie bridge, and besides fondamenta della Pescheria, there’s a small porch that easily goes unnoticed. A small yellow plate in the manner of those pointing the direction to San Marco or the Academy, indicate the entrance to Venice Jewish quarter. Just crossed the bleak threshold, on the...

On a Bridge, one Night amidst the Fog

22/08/2013 18:03
I am a blackmail victim. Someone pointed out the existence of some old pictures I will not itemize. But extortion has not obtained the expected outcome. I keep in my power some old photographs where blackmailer appears, but probably only are useful to remind she once was young, or, at least, it can...

Venice or the Theory of the Labyrinth

22/08/2013 17:40
Λαβύρινθος, Labýrinzos: in ancient Greek means something like the place of the double blade axe. In times of the Minoan civilization Labros axe symbolized the city of Knossos and by extension Pasiphae son’s myth, the Minotaur, the famous dweller of the Cretan palace maze. And etymological origin... 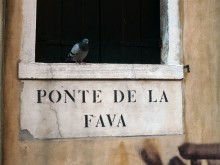 I arrived following Corto Maltese footsteps, the famous Hugo Pratt cartoon character. For years I tried to resist the decadent charm of the lagoon city for quite banal and devoid question which has no interest at this moment. Once I started after the sailor steps in his adventures in the Serenissima an unknown interest started to invade me as also did the shadows of other illustrious visitors. There were Brodsky, Ruskin, Proust and Mann, Prendergast and Turner. Also its anonymous inhabitants provided with a definite life outside the vicissitudes of tourism. In such an appetizer called spritz is so common and inherent to its population as discomfort that occurs in an early garbage collection or with the harsh tides that draw visitors' attention but difficult extremely daily life.  It’s the charm and simultaneous inconvenience of living between a streets private of wheeled traffic. Beyond is Terraferma, the territories that once depended on the Republic in contradiction with its maritime spirit and that today make up the province of Veneto. There are the cities where the Renaissance left its mark, the walls of others who wanted to be impregnable and love stories such as those Shakespeare described supposedly inspired by Veronese story of Romeo and Juliet.