Homepage > A Palace beside the River

A Palace beside the River

When the King of Siam Phrabat Somdet Phra, also known as Rama I the Great, decided to move the kingdom capital from Thonburi to neighbour Krung Thep must have thought in a place which don’t lack of any of the charms the King Sun got at Versailles. He built beside the Chao Phraya River Bangkok’s Royal Grand Palace, Phra Borom Maha Ratcha Wang. 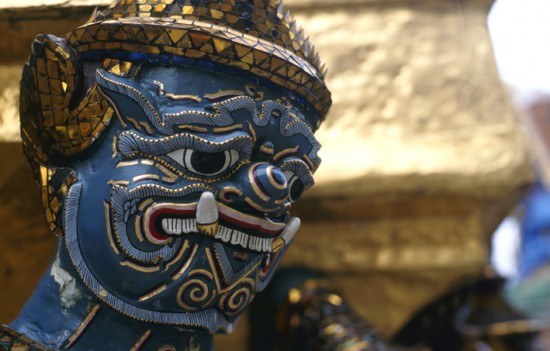 A little bit more than a century had gone since the famous visit of Kosa Pan, ambassador of King Somdet Phra Narai the Great, to meet the French king Louis XIV at Versailles in September 1686. The visit left a deep mark in Brest, port of arrival, so they changed the name of the main street for rue de Siam.

The large Bangkok palace complex began to be built in 1782 and served as a royal residence until the mid twentieth century. It is surrounded by a nearly two kilometres long wall and is also protected by a channel. Seventeen small strongholds reinforced the perimeter which got twelve gates. Throughout the time that has been occupied new buildings were added and others have been reconstructed. Inside the enclosure, as well as the royal, court and government, large courtyards and extensive gardens alternate with open pavilions divided into four major sections separated by walls and doors. In the Middle Court, the largest of the four, buildings related to the exercise of royal power are concentrated as the throne halls once hosted the coronations of Thai monarchs. These halls were reached through Thevaphibal door, watched by Chinese stone guardians. The golden throne, were royal audiences took place, is covered by a prolonged dome representing Mount Meru, the centre of Buddhist and Hindu cosmogony. It is decorated with representations of the god Garuda. In the inner zone, Kang Nai, are Silawai gardens, where the young ladies of the court played cricket at the beginning of last century. These premises were dedicated exclusively to the king’s living rooms and for his queens and consort’s harem. 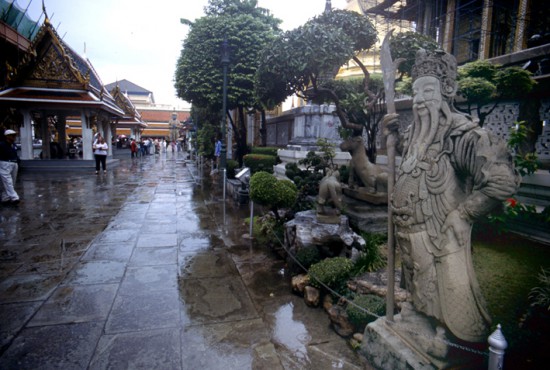 But the most spectacular section is undoubtedly the one that occupies the temple of the Emerald Buddha, Wat Phra Kaew, another fenced enclosure inside the complex where a hundred of buildings are distributed around the main temple. Here is the statuette of nearly three feet, carved from a single piece of jade, representing Lord Buddha waiting Nirvana.

The statue was probably carved in India, as the legend tells, but is also linked to several kingdoms in Southeast Asia. According to the same legend it was carved by a saint called Nagasena helped by Vishnu and Indra hundred years before Buddha attained Nirvana. The holy man prophesied that the image would propagate Siddhartha’s religion to five lands: Lankadvipa, now Sri Lanka, Ramalakka, Dvarati, Chiang Mai in Thailand and Lan Chang, today Laos. So, interspersed with the story, the stone was taken to the island of Ceylon to protect it from civil strife. A Burmese monarch sent a legation there to collect Buddhist texts and get the emerald to bring prosperity to his country. That was in the year 457 AD, at the time of the kingdom of Anuradhapura heydays in Sri Lanka, but the statue did not reach its destination as on the way back it was brought to Cambodia. Almost a millennium must elapse for a Siamese army took Angkor Wat, seizing the statue of Buddha and finally transferring it to Chiang Mai. A Lao prince took the stone to Vientiane and Luang Prabang until the Siamese king Taksin regained in 1778 bringing it to Thon Buri until with the moving of the capital made by Rama I it was deposited, until today, in the temple built to this purpose in the Grand Palace in Bangkok.

The building that houses the Emerald Buddha is richly decorated. The tiles that shelter from the rain are orange and green; a huge mural that surrounds the building described in images the full narrative of Ramayana. There are frescoes with scenes from Buddha’s life. The entrance is guarded by two huge sentinels five meters high each. They are the fierce green ogre called Yaksha.
Other fantastic beings haunt the place. Attached to the walls one hundred twelve representations of the god Garuda, anthropomorphic eagle shaped, are around the main room. The golden Nok Tantima and Kinnaras, half bird, half human being, pose around.

In Wat Phra Kaew there are three pagodas, one of them, from the nineteenth century, was built in the style of the Sinhalese stupas. Throughout the complex, symbolizing the power, there are statues of elephants. Sometimes are also seen travelling at their own pace on the street. As the monks from nearby monasteries, dressed in their distinctive saffron clothes. 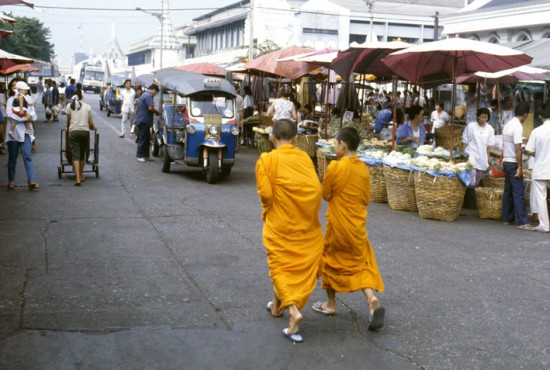 No missing monks and temples in Bangkok. South of Grand Palace Wat Po temple houses the colossal reclining Buddha statue with its one hundred and fifty feet in length. There are a thousand statues in the temple, smaller, of course. The faithful throw coins to the one hundred bronze bowls symbolizing Buddha’s favourable avatars. They say it brings luck.

Wat Traimit, near Chinatown, is home to the large Golden Buddha or Phra Phuttha Maha Suwan Patimakon, a statue twelve feet high, which weighs five tons and a half, eighty percent is pure gold. The precious metal was discovered in the fifties, when the statue was moved and fell to the ground. Part of the overlying plaster came off revealing a golden glow inside.

Wat Benchamabophit near Chitralada Palace and the Zoo, is the Temple of the Fifth King or the Marble Temple, the last great temple built in the Thai capital, a year after starting the twentieth century. Two Burmese stone lions guard the access to the room where there is a copy of Phitsanulok Ninaraj Buddha, which it’s said cry tears of blood. Also, here are preserved the ashes of that fifth king, Chulalongkorn.

Between the old royalty palaces and Phrapinklao Bridge, the piers extend their docks to accommodate the royal barges on Chao Phraya, the river that runs along the city. Although they are also real, though less luxurious, there are hundreds of motor or rowing boats sailing in the Thonburi floating markets and wooden houses overlooking the river. It could look like a Venice without ostentatious mansions on the Great Canal, but for the Grand Palace. 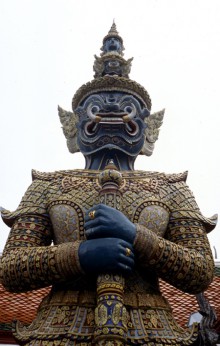 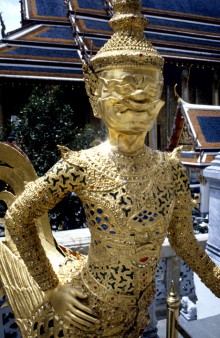