Homepage > As Easy as Kissing the Saint

As Easy as Kissing the Saint

My first pilgrimage was quite accidental. I left Madrid without having the foggiest idea about where to go. So I said goodbye to my friends in the capital and went to Chamartín Station as I could have gone either to Atocha. There was no intention whatsoever, just as there was neither choosing destination. It was something as simple as boarding the first long distance train, no matter where. I woke up in Santiago de Compostela. 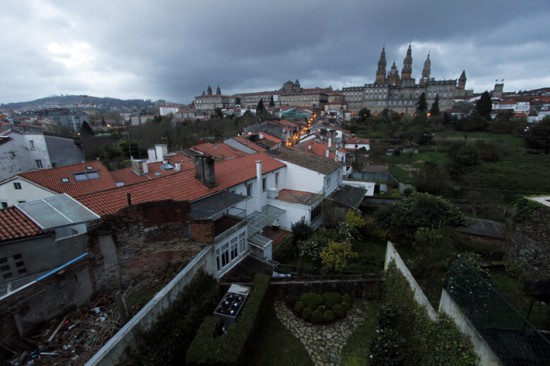 I settled on a small pension in rua del Hórreo, very close to the old monumental downtown. It was as homely as cheap. The light was a simple bulb, but had one of those beautiful glass balconies so presents in Galicia. There was no sink, a small wooden structure with a plastic bowl and a porcelain bowl served the same purpose. I was going to read to the cafe terraces near Fonseca square. I could spend hours just sitting watching people pass by or simply wandering the streets, welcoming old town street porches in the afternoon rain. I spent days repeating the same actions, the same gestures, returning to the same places, walking and retracing the same routes. One day I had to leave and since then, and even now, I have felt a certain longing for those repetitions, walks under the rain, the glass balcony ... and the plastic basin.

After three decades, street pavement I recalled wet with rain, small shops and bars, had changed, people probably had changed. Maybe the rain stood. Souvenir shops multiplied and apostle effigies were displayed in the windows besides hundreds of shells, sticks and endless Jacobean paraphernalia.

Although more has changed since San Fiz de Solovio priest saw a strange shining star for several consecutive nights above a mountain oak in Burgo de Libredón, while heard heavenly melodies. For that reason the place eventually became called the Field of the Star or Campus Stellae. Informed Teodomiro, Iria Flavia bishop, he went to see with his own eyes the meteor July 25 813. Arrived to the oak stumbled upon the remains of the brother of John, the Baptist, son of Zebedee and Salome: the remains of the body of St. James the Great kept in a small mausoleum. The news spread like wildfire and everyone was giving orders. The king of Asturias, Alfonso II the Chaste, immediately ordered to build a church in honour of the Apostle. Pope Leo III ordered the transfer of the bishopric of Iria Flavia to Compostela. Mansur ordered the sacking of Sant Yaqub in Jalikijah.

The official version about how the Apostle came to Galicia was built on the legend of the seven men who evangelized Hispania. Would they, or some of them, moved the body and the head of the saint from Jaffa, on the Palestinian coast, to Iria Flavia. Eight hundred years would pass until Bishop Teodomiro recognized him.

The Middle Ages saw a common phenomenon today: tourism and souvenir trade. By then known as pilgrimages and relics, but without reaching the current dimensions. The fact was boosted in the years around Jesus Christ death millennium. First to Jerusalem, in the Holy Land during the Crusades and the establishment of the Crusader States, visiting the most revered places in  Christianity, the Holy Sepulchre where Christ was buried. After Rome, the seat of the papacy and where lie the remains of the last western martyred apostles: Saint Peter and Saint Paul. The tomb of the Apostle would be added to the list of eligible destinations. Northern peninsula Christian monarchs needed strength arguments against pushing Al Andalus so promoted the cult and opened the ways for the pilgrims, building bridges, roads and lodging to ease the movement of believers. Just missing a guide. Pending the arrival of National Geographic or the Michelin or Routard, on the mid-twelfth century was completed Liber Sancti Jacobi, better known as Codex Calestinus, by Pope Callistus II, promoter of the work that had to guide pilgrims on Saint James route. 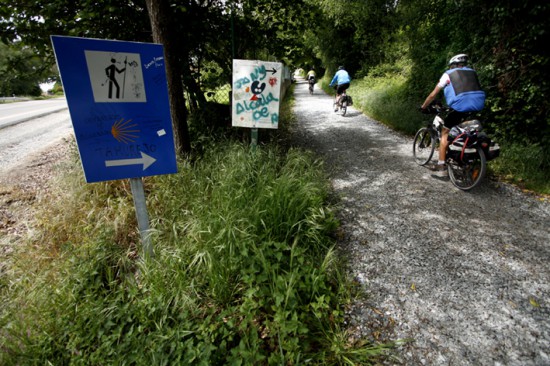 The volume, illustrated jewel among the incunabula of the era, consists in five books and two appendices. Contents the liturgies in the cult of the saint, the miracles attributed to him, the body translation history, Charlemagne conquests as responsible to promote Frank road, and finally Iter pro peregrinis ad Compostellam, the pilgrim's guide.

This suggests paths and towns description through the road, indicates hospices and describes peoples that can be found on the way, lists the names and locations of the Saints to be visited along the route and finally describes in detail the city of Santiago.

The Codex Calestinus was copied several times, in more or less reduced versions or more or less extensive. The most complete is undoubtedly preserved in Santiago Cathedral archives where was surprisingly stolen in July 2011. Theft of the Century highlighted the newspaper El Correo Gallego. The Codex had not left the vault, where were keep the most valuable volumes, since it was exposed, the last two occasions, in 1975 and 1993. One year later, also in July, was recovered near Santiago. It had been abducted by an electrician employed at the cathedral, apparently with kleptomania problems, as during the twenty years he had been working on the temple had come to accumulate one million two hundred thousand euros in cash, perhaps cleaning brush, and an impressive accumulation of various objects that stored in a garage.
Other complete Codex copies are stored in the British Library in London, in the Vatican City, in the Salamanca University Library and the National Library of Madrid.

The first waves of European pilgrims began to arrive in the tenth century. In fact the first news comes from the bishop of Le Puy, Gotescaldo, who made the trip in 951. Generally travelled through Pyrenees, in Roncesvalles and the Portus Summo or Somport, to access to the peninsula. Both routes converged in Puente la Reina and from there followed by more commonly known as the French way. Cities on the road built hospices and opened shops. The pilgrims were virtually guaranteed refuge in stages four to five leagues, i.e. between 12 and 16 miles, before they came to reach the summit of Monte del Gozo, where they obtained the first sight of the Apostle’s city.

Santiago became a cosmopolitan place where could be seen and heard people coming from different parts of the continent speaking different languages. On some confessionals notes reported in which language could be exercised the sacrament: pro linguis gallica, itala, germanica et hungarica. The route also attracted merchants, opened lodges and concheiros guild, precursor of today's souvenir shops, affiliates over one hundred workshops where pilgrims acquired scallop shells to sew to their costumes. As today, the streets of Platerías, Azabachería and Calderería were packed with pedestrians swarming in a constant coming and going. Sometimes, Santiago could become dangerous. Quarrels were not rare among pilgrims of different nationalities. Violent deaths in the interior of the cathedral became so common that in 1207 it was agreed that the masses wouldn’t be suspended. The corpse of the unfortunate would be removed and with some holy water would be further purified the place. Also were prostitutes enticing newcomers or unscrupulous and scammers trying to take advantage of them.

Meanwhile the cathedral housing Apostle’s relics, evolved. The first chapel was followed by a small church built in 829, which was widened by the prerrománic extension ordered by King Alfonso III. Three years before the millennium Almanzor plundered the city, taking the bells to Cordoba for further humiliation of the Christian kingdoms. The new Romanesque cathedral was begun in 1075 and would not be consecrated until 1128. At the end of the twelfth century Master Mateo starts the crypt and the Portico de la Gloria. The temple undergoes endless transformations and extensions. The cloister in the early sixteenth century and the main baroque façade in the XVIII. The relic of the Apostle rests in a silver urn engraved on a marble altar. Tradition requires climbing the stairs that are on the crypt and leading to the rear of the altar, where is the statue of Santiago. Once there the effigy it’s hugged and kissed.

Pilgrimages declined in the fourteenth century, with Christian kingdoms shifting attention to the south of the peninsula along the conquest of Muslim lands and the crisis caused by the Protestant schism. Periods of plague, war and famine led the road to Santiago disused and almost forgotten. It was not until the seventeenth century that slowly reborn the habit of making the pilgrimage. At the end of the last century the situation changed. In 1973 only was confirmed the presence of 37 pilgrims. Twenty years later, in 1993, with the start of the route tourist promotion and the Jacobeo or Saint James year coincidence, those in which the Apostle's feast falls on a Sunday, over ninety-nine thousand people were attracted to the Galician capital. Since then the progression of the visits has been ongoing since 2006 and has not dropped a hundred thousand a year, with the record of 2010, also Jacobean years, when 272,000 came.

Pilgrims sealed along the way a notebook that certifies checkpoints along the route. Eventually the church authorities expend the so called Compostela, the certificate to have been completed the pilgrimage and that entitled the bearer for a reduction in the waiting time in purgatory.

Currently it is necessary to prove have been walking at last sixty three miles or the double if riding bicycle. Formerly the scallop shell was a true testimony of completing the trip; hence it has become a Camino de Santiago symbol. Precisely French name for the mollusc is coquille Saint Jacques.

Purgatory currently is on earth, usually in airport facilities before reaching the sky. Back on land, from Lavacolla, Santiago airport, in less than one hour is possible to reach the Obradoiro Square, cross the Portico de la Gloria, entry to the crypt where the Saint stays and kiss his back. 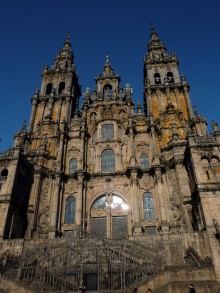 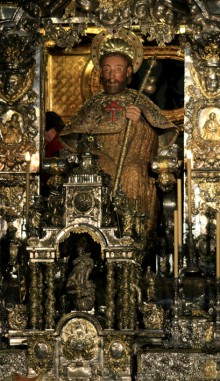