Isidore Justin Severin Taylor, born in Brussels in August 1789 and Baron since he was named as such by Charles X in 1825, showed from an early age his interest in traveling. At twenty he went to Brittany, Flanders, Germany and Italy. In 1829 he managed the transfer of Luxor obelisk to Paris to be installed at the Place de la Concorde. Nine years later, in 1838, he will be appointed Inspector General of Fine Arts and commissioned by Louis-Philippe to purchase in Spain the canvases that should form the Spanish gallery of the Louvre Museum. He will also be on charge, as a royal commissioner, of the Théâtre Français.

Those were the years of Romanticism and passion for Orient exoticism effervescence that add picturesque concept to the aesthetic categories of the beautiful and the sublime. This reaches the aesthetics of Greek and Roman ruins and all those monuments of the past that got a nearly mythical aura at a time when the recovery or, at least, maintaining of the historical heritage was starting to be valued, helped by the influence of the appointment of Prosper Merimee as inspector general of historical monuments in 1834 and also the publication of the Voyages pittoresques. Many of the engravings present in the work of Taylor and his collaborators would modify their subjects because of the restorations carried out.

Baron Taylor’s Voyages pittoresques were developed, neither more nor less than along 58 years, between 1820 and 1878. In that period were published twenty four volumes in folio format, in fact one of them is the index, on them, collaborated the writers Charles Nodier and Alphonse de Cailleux and numerous artists and engravers as Adrien Dauzats, Thomas Shotter Boys, Nicolas Chapuy, Louis Marie Baptiste Atthalin and many others who worked at one time or another along so many years. The volumes were divided by regions beginning with Normandy, published in 1820, which would be followed by the Franche-Comté, Auvergne, Picardy, Brittany, Dauphiny, Champagne, Burgundy... about the Languedoc appeared, between 1833 and 1838, four volumes totalling 760 plates lithographed, all of them accompanied by a short text.

Photography was forming at the time, Nicephore Niepce in 1826 made the first trials improved by Louis Daguerre who presented their findings in 1839 at the Académie des Sciences in Paris. However, to capture documents graphically, Taylor's team used lithography, the process created by the German Alois Senefelder in 1800 that allowed the printed reproduction of multiple copies using an iron polished stone in which, by a chemical process, were fixed inks to transfer the image.

Baron Taylor died in Paris on September 6, 1879, one year after completing the Voyages pittoresques. His effigy is now a monument inside the Père Lachaise graveyard. 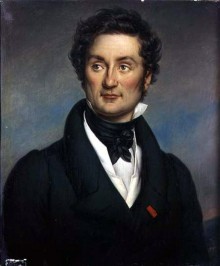