In Markt, the large market square and epicentre of the city, opposite the bell tower, French fries stalls are traditionally parked. They say they are the best in the world. Just beyond, at any of the restaurants around the square may be mixed with mussels, making the combination one of the quintessential dishes of any self-respecting Belgian home. But Bruges has a well deserved reputation for artisan chocolates. At least fifty chocolatiers are established in the city, some of them with long years of experience and tradition living with an advanced spirit of innovation and experimentation. 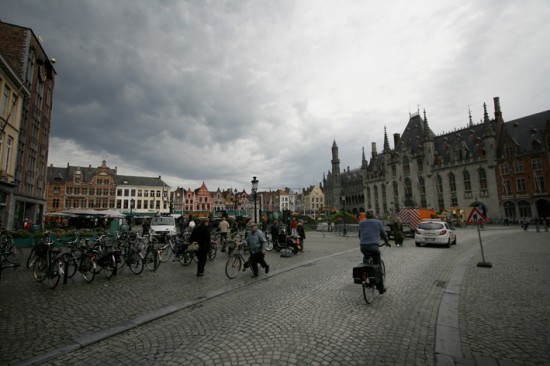 Bruges got its rise a bit at random. In 1134 an exceptional storm caused the opening of a natural channel between the sea and near the city, in the small town of Damme. Leaving out random the hand of the man opened another channel between the city and Damme giving to Bruges a direct access to the North Sea. Some years later and the alliance with the Hanseatic League enriched the city with the wool, textiles and cloths trade. By the same route would arrive another raw material: cocoa. The decline of the city would come in the form of sediment that blinded progressively the Zwin, the channel, in the sixteenth century.

The main market was in great Markt square, where it is still held weekly and any day is easy to find the famous fries. At one end stands the Belfort, the bell tower of 272 feet high which houses a six tons bell and a forty seven pieces carillon. Three hundred sixty-six steps lead to the top of the tower. Taller than this are Sint Salvatorskathedral and the Onze Lieve Vrouwekerk, the Church of Our Lady, steeples. At the other square’s end breweries terraces are concentrated . Here you can get a Sudden Death. It's not serious, just the beer’s brand: Morte Subite, one of the Belgian beers velvety raspberries flavoured. Other less sudden deaths were those provided by Jan Breydel and Pieter de Koninck in the Battle of the Golden Spurs in 1302 to the French troops who  attempted to occupy the city. Today both enjoy bronze statues erected in the centre of the square.

Some chocolatiers links through Bleidelstraat, Markt and Burg squares. An eclectic space that combines civil and religious buildings from different periods and styles. Staadhuis, the city hall built in 1375 on the one hand, exhibits his flashy flamboyant Gothic facade. The Oude Griffe, civil registration and Magistrates' Court today has a Renaissance facade. On the right the Heilig Bloedbasiliek, the church of the Holy Blood combines two styles, the Romanesque in the first floor where the church of Saint Basil was built in the twelfth century, with the Gothic of the second floor, where is preserved in a cylindrical crystal rock and silver reliquary the Holy Blood, a relic that is said obtained by Joseph of Arimathea in the crucifixion and Derrick of Alsace, Earl of Flanders brought from Jerusalem in 1149. Every year a colourful parade is made around Bruges streets along the feast of the Assumption of Mary. There’s a way out through Blinde Ezelstraat, the Blind Donkey Alley, an archway that leads to Vismarkt, the old fishmarket and Dijver channel piers.

Back to Markt is almost on the corner with Steentraat the artisan chocolate Roose who creates original tablets with fruit, crackers or ginger. Going down the street toward the wooded Simon Stevinplein square where concentrate three additional locations: The Chocolate Line, in the same place is listed in the Michelin Guide. The master chocolatier showed to the Rolling Stones how to sniff chocolate powder administered by an instrument of their own creation, the Chocolate Shooter. It also facilitated the nude photographer Spencer Tunick edible chocolate paint for one of the photographs of naked crowds who performed in the city. Another of his creations is a lipstick. Of course made of chocolate. 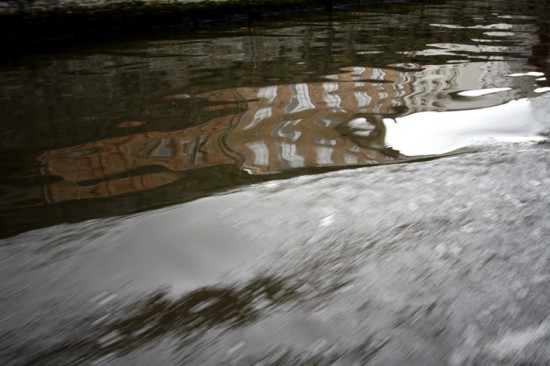 Depla in nearby Mariastraat sells elegant chocolate flowers and The Old Chocolate House, across the street has a wide assortment of spiced chocolates. More remote but not least original are Spegelaere Chocolaterie, in  Ezelstraat near Klaverstraat, which manufactures grapes stuffed with marzipan or praline and Brugse Kasseien, the famous Bruges chocolate cobblestone. Close to Beguinage ancient religious community in Wijngaardstraat, Beginjntje specializes in chocolate and marzipan combined in the shape of small edible nuns in eleven different flavours. Of course not missing a museum. The Choco-Story. It is at number 2 Wijnzakstraat. The residence Croone a four-storey historic building built in 1480 which had housed a tavern and later a bakery has assembled a myriad of items relating to cocoa.

The city name is related to the word Brugge in Dutch, meaning bridges, and of these, such as chocolate, Bruges does not go exactly scarce. 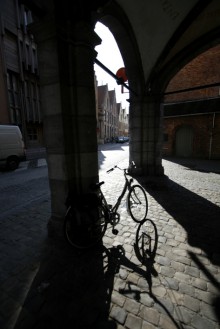