In Roman times, the hot springs invited the creation of a town, Aqvae Calidae, today Caldes de Malavella. Its waters continue to be exploited, both for treatments and for bottling water. Between the end of the 19th century and the beginning of the 20th, they attracted the attention of wealthy families who built summer residences following the architectural currents of the time: Art Nouveau or Modern Style. 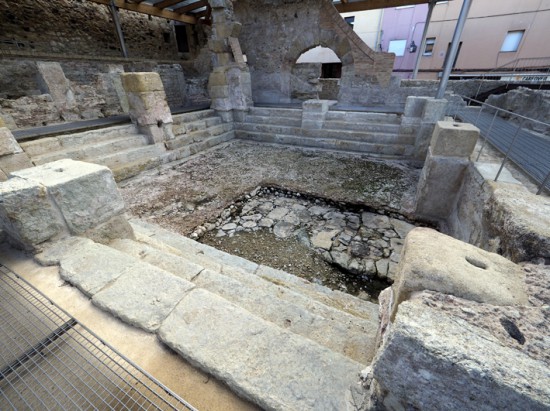 Three cores group the hot springs; they are the springs of Puig de les Ànimes, Turó de Sant Grau and Puig de les Moleres. The water flows at a temperature between 56 and 60 Celsius degrees and its therapeutic properties were already recognized in Roman times. It was then, around the year 50, when on Puig de Sant Grau hill, some thermal facilities were built, in fact, upon older ones. The town appears in the Peutingerian Tabula, which shows the itinerary of the Roman roads, naming it mansio of Aqva Voconis; and appears in the Apolinares or Vicarello Vessels, here named Aqvis Vocontis.

The Roman spa is preserved in fairly good conditions, particularly the natatio, the central pool of 7.9 by 6.65 meters that is the central element. The natatio was surrounded by a porticoed corridor where the south wing had five small rooms and the practically symmetrical east and west wings had three. The central room of the eastern wing was a sacralised room, where water came from the spring and then poured into the pool: The room walls, whitewashed, were decorated with polychrome murals and a small altar. Over the second century, reforms were made in the facility that remained in use until the middle ages, when the area was walled. Of these defences, there is still some wall stretch and three round towers. On the same promontory, there’s a small hermitage of Romanesque origin, completely rebuilt in the 19th century, it is Sant Grau Hermitage. 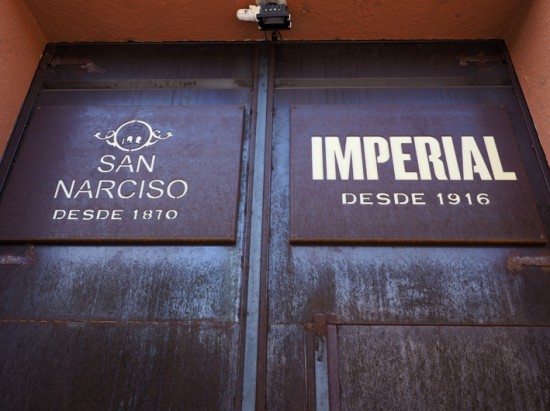 Between the end of the 19th century and the beginning of the 20th, thermal treatments and therapeutic use of these waters became fashionable. In Caldes de Malavella, two establishments were built to house the new clientele while intuiting the future of bottling water. Prats and Vichy Catalan baths were born and Pla and Deniel family founded in 1870 San Narciso bottling plant. Ten years later, in 1880, the water from the Fetge spring was marketed under the name of Agua del Puig de las Animas that from 1891 it would become Vichy Catalan. Even at the end of the 19th century, Imperial Water plant was built in Puig de Sant Grau, linked to the industrial man Pau Estapé.

Prats Spa was created by the namesake family in the middle of the town. By 1840, the water from the Mine spring began to be channelled and the establishment called Baños Prats was built, which at that time had about four hundred clients yearly. In 1900, a large three-storey building of symmetrical volumes was built with an abundant decoration of neoclassical inspiration on the facade that would be remodelled twelve years later, in 1912, when the monumental modernist entrance door was incorporated. Vichy Catalan Spa, promoted by Dr. Modest Furest Roca, opened its doors in 1898, when it had been bottling water for fifteen years. The building was conceived by the architect Gaietà Buigas i Monravà, architect of the Columbus monument in Barcelona, ​​the construction, modernist, has numerous arabizing elements such as the horseshoe arches of the ground floor and a couple of replicas of the Alhambra Lions fountain. 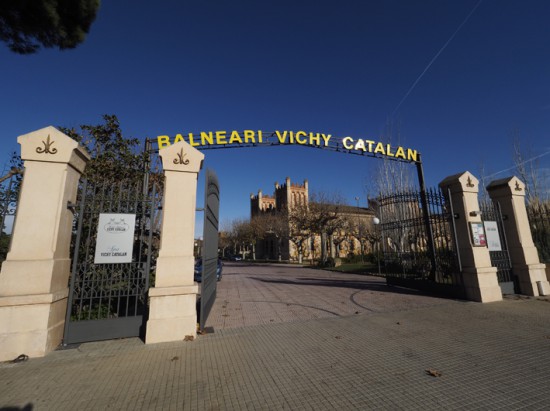 The spas attracted vacationers, not only for treatments but also for playful use of the baths. The improvement of communications facilitated the flow of visitors, who initially occupied hostels, pensions or rented private rooms. The wealthiest families built their own houses, which, in the same way as thermal installations, followed the most in vogue architectural line in those days: Modern Style. The town keeps the most important samples of the region. On the outskirts, Recolons and d’en Rufí walkways, flanked by shade bananas, were urbanized, the first at the behest of the industrialist Bartomeu Recolons i Puiggròs. Here you can find Torre de Can Sala, a monumental and eclectic summerhouse, with towers crowned by a balustrade in the corners and surrounded by a fenced garden, and Villa Rosario, this one with ceramic decorations and an outstanding arabizing style, with horseshoe arches on the ground floor and in the windows. This was also known as Tower of the Germans, as it was commissioned by a Berliner doctor named Otto Streitberger, who dedicated the name of the estate to his Andalusian wife, Rosario Pequeno. It was built between 1914 and 1928 by architects Ramon Vinyals i Guitart and Joan Vinyals i Solà. On Recolons walkway you can see, at number 37, Colonia Rodríguez, a group of four terraced houses with symmetrical windows and cornices, painted in different shades; Bell-Estar House, in number 54, a summer house that highlights verticality. Next to each other, Casa Mas Ros and Xalet d'Antoni Mas, both in Modern Style. The first with an outstanding polygonal tribune in the corner. Here lived the composer Francesc Mas Ros. There are many other Modern Style houses close to Sant Esteve Square and the Prats Spa. Just in the square the Pla i Deniel House, of eclectic style but rather neoclassicist lines. Next to it the Pla i Deniel Garden House, where a tower crowned by a wrought iron pyramid recalls a reduced version of the Eiffel Tower. On Doctor Furest i Roca Avenue stands out Matheu, Manegat and Punxes houses. The first one was owned by the editor and poet Francesc Matheu i Fornells, its facade, asymmetrical and uneven, combines neo-Gothic elements; the second has a lush garden that barely allows seeing the facade of the house, a neo-Mozarabic and Modern Style mixture of two floors. And the third, crowned with ostensible wrought iron, from 1949, was the last one built in Modern Style. There are some more in the urban centre: Casa Quintana, Perxachs, Motlló, Casa Rosa, also called Casa Estapé or Casa Dieta Levi, close to the old Roman baths. This one dates back from the late 19th century and is an imposing building with two different bodies decorated with ceramic friezes and a geminated window, which is currently a retirement home. The door is shaped like an ace of spades and the facade complements made in wrought iron. Owes its name, Casa Rosa, Pink House, to the facade colour.

Along the Spanish Civil War and, later, during World War II, the spas, and also some private summer houses, became military hospitals and refugee shelters, that of Vichy Catalan was the Military Clinic number 2 of the Girona district, when they arrived displaced people from the north of the peninsula and from the Aragon front. In 1944 they welcomed more than a thousand Italian and military sailors and German agents fled from the defeat of the Reich and protected by the Franco’s fascist regime. 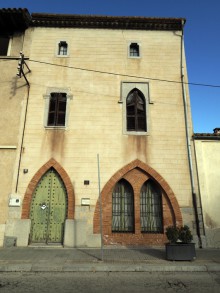