Homepage > From Ragusa to Dubrovnik

From Ragusa to Dubrovnik

Non bene pro toto libertas venditur auro, freedom is not for sale not even for all the gold in the world. The Republic of Ragusa, when it was a city-state on the Dalmatian coast, had to learn to swim and eat in the turbulent waters between Venetian and Turks to stay afloat and true to its slogan. 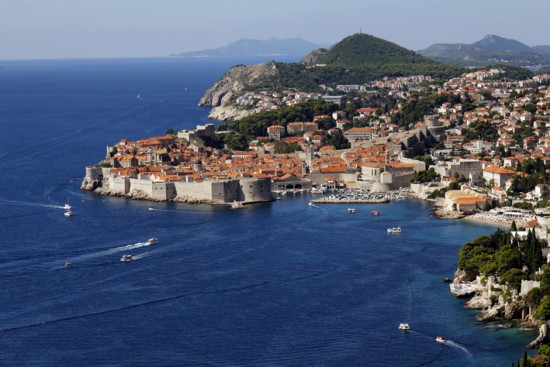 Today known by its Slavic name, Dubrovnik was born from two cities split by a channel. The original settlement was established on an island that was named Laus, rock in Greek, which eventually ended to be known as Ragusa. Across the channel, on the hill attached to the coast and where oaks - dubrava - grown, Dubrovnik was founded. When the waterway was blinded, both cores were united. Since the beginning Ragusa was linked to the Eastern Roman Empire, to Constantinople, until the looting of this in 1204 during the Fourth Crusade. Then Ragusa was incorporated to the Republic of Venice and took their institutions creating the Consilium Maiorum, that is, the Senate. Also was alike to the ceremony that annually linked Venice with the Adriatic in marriage with the Sea that Ragusa transformed in St. Blaise celebration. Each February 3, the fleet admirals deployed their white flags with the saint pronouncing a praise to which the mob responded: Long live St. Blaise on the land and the sea! That St. Blaise, the Armenian bishop who lived in the fourth century, is the city patron shown nearly every city’s corner, his carvings are scattered everywhere, on the doors, attached to the walls, on the harbour and, of course, upon St. Blaise Church.

In 1358 Ragusa broke ties with the Serenissima, becoming an independent city although paying taxes to the Hungarian kingdom. Between fifteenth to nineteenth centuries Ragusa enjoyed a remarkable prosperity; it expanded its territory over the islands of Lastovo and Mljet and along the Peljesac peninsula; gathered a two hundred vessels fleet and a business talent for diplomacy that eased its survival between the Mediterranean ruling powers. It had opened eighty consulates worldwide and, years later, was one of the first European states to recognize the independence of the United States of America. Ragusa also survived the terrible 1667 earthquake that devastated the city and wiped out almost half of its inhabitants. But the Libertas would be lost with the arrival of the Napoleonic troops that took over the whole Dalmatia. 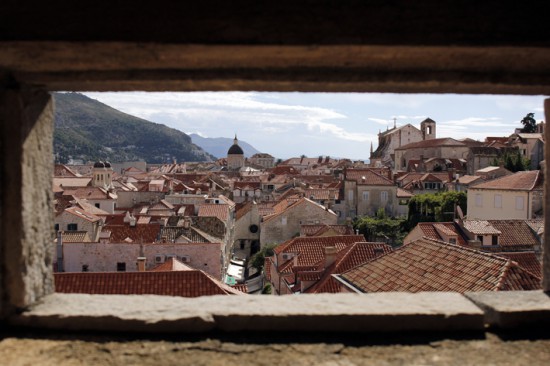 Today Stradun, once the blinded channel, is the main showcase of the old town and city. Links both gateways, Ploce and Pile, and along its route are the main old Ragusa public buildings. At Luza Square are the Rector's and Sponza Palaces and Crkva Sv Vlaha, St. Blaise Church. The first was the Republic governor residence, who was designed only for one month to dispel doubts about his attachment to the public treasury. In that period he was not allowed to leave the palace except for some notable exceptions. In the construction worked the Neapolitan architect Onofrio della Cava who also developed the water supply system to the city. The palace has an extraordinary portico with columns. In the capitals there are carvings by Pietro di Martino, a portrait of Aesculapius and the judgment of Solomon. Today the palace houses the Museum of Dubrovnik historical section. Nearby stays the Sponza Palace, a XVI century Gothic and Renaissance mansion that once was customs, state treasury, mint, bank and armoury. Built by the local master Paskoje Milicevic it has a beautiful porch that overlooks the square. Today houses the city archives where there is a large collection of ancient manuscripts. The palace was one of the few public buildings that withstood the earthquake of 1667. Opposite is the church of St. Blaise, dedicated to the patron of the city. It was rebuilt in 1715 as it was affected by the earthquake and destroyed by fire in 1706. And in the middle of the square stands the Roldan Column, the medieval hero of Roncesvalles, here sculpted by Bonino of Milan. The figure right forearm length was used as a measure unit; it was a Ragusean arm, equivalent to 20.5 inches. On the flagpole that stands on the column waved the white flag with the image of St. Blaise, the flag of the Republic of Ragusa. The cathedral is nearby, beyond the church; rebuilt after the earthquake keeps the relics of the saint, his head and one arm. Next door, a bell tower that reaches 121 feet above the street displays a clock that also shows the moon phases. Top two green bronze figures periodically make the bell ring.

Southwards Baroque steps looks like those of the Piazza Spagna in Rome, although smaller, leading to the square where St Ignatius Church and the neighbourhood next to the sea walls form a maze of stairways and passageways under porches. Sometimes when it rains thoroughly, the steps looks like a succession of real waterfalls. At the bounds of town, almost at the entrance of Ploce Gate, the Dominicans built a monastery where they amassed a large library and paintings collection.

Again at Stradun, now at the opposite end, there’s the Franciscan convent whose facade follows the street with the Gothic portal of the Pietà and also the figures of St. Jerome, St. John the Baptist and, above them, the Creator, a large carving made in 1498 by the brothers Peter and Leonard Petrovic. Inside the monastery there is which is said to be one of the oldest pharmacies in Europe, dating from 1317 and a library of ancient manuscripts and incunabula. The monastery has two cloisters; one is open to the public with some curious late Romanesque capitals on its columns. Next to the monastery is the XVI century small votive church of St. Savior.

In the square in front is Onofrio’s Great Fountain, built by the aforementioned Neapolitan architect in 1438. Dubrovnik chose, as had done centuries before the Romans, to get fresh water instead of relying on that accumulated by the rainfall. An aqueduct supplied the city from the spring of Sumet, seven miles away. The water flowed through the sixteen ornate pipes of the covered fountain which was extraordinarily decorated until the earthquake day. Now remains the figureheads surrounding each pipe. The supply provided by the aqueduct had other branches, one that reached the port, other to the Jewry, one more up to the atrium of the Rector's Palace and also to the Franciscan cloister. In Luza Square there is Onofrio’s small fountain, another derivation, this sculpted by Pietro of Milan.

Stradun, besides being the hub of the city, is the flattest side. The parallel, Prijeko Ulica has elegant restaurants with tables set out along the street. From here every street leading to the north are just nothing else than a succession of steps. The same applies to the south where, parallel streets mimic some of the character of Stradun, perhaps even with more shops. Here the restaurants serve pizza and Italian food and soon reach the stairs leading to the end of town, just to the walls.

These, more than defend the city, prevented attacks, and were modified and expanded along the time covering a perimeter of nearly one mile and a half, sixteen towers defend them, in some places reaching eighteen feet thickness. Five strongholds complement the protection afforded by St. Blaise. Two of them, Revelin and St. John, closed the harbour, there where the vessels were made and goods shipped to west and east. Now the restaurant terraces dispute for the customers. St. John is now the Maritime Museum and the Aquarium. On the land side Minceta Tower discouraged any attempt to approach the wall for hostile purposes. Its name derives from the family that took ownership of those lands, the Mencetic family. The catastrophe that meant to the West the fall of Constantinople in 1435 advised to strengthen the walls, even more when the Turks occupied Bosnia. Bokar stronghold and Lovrijenac fortress deal with the western walls and the sea, the last separated from the city and completely autonomous onto a 120 feet cliff.

The only time defences strength was tested it was during the disintegration of Yugoslavia. Dubrovnik suffered a severe siege that lasted nine months. In October 1991 the federal army began the offensive and the blockade. Despite protests from the international community they not obviated attacks to the Old Town, a world heritage site since 1979. Belgrade had justified the attacks on Croatia to protect Serb population. But Serb Dubrovnik residents committed in the help of their city against an unjustified aggression.

In early September 1992 started in The Hague, Netherland, the international conference on the Yugoslav conflict. Serbia believed it was the right moment to press.

As if it were a farewell the worst bombing was the last. Twelve minutes to six in the morning of St. Nicholas day, December 6, 1992, the first shell fell. Until half past eleven, when the deadly rain stopped, it had hit the old city the diabolical figure of 666 projectiles. The bombing hit particularly Stradun and caused nineteen victims, including the photographer Pavo Urban. He became interested in photography through theatre. When the siege began he returned from Zagreb and started to take pictures of the town siege from within publishing his snapshots in Slobodna Dalmacija, Dubrovački Vjesnik newspapers and for the newly created Ministry of Information.

That morning Pavo took his two cameras, one loaded with slide rollfilm and the other with black and white and entered the Old Town through the gate of Ploce. He took cover under the portico of the Sponza Palace at Luza Square and in front of St. Blaise Church. Stradun starts here and the first colour snapshots captured the completely empty street and the flare caused by the impact of a shell shaking the street and the camera. He turned the camera to take some successive vertical shots showing the rising of a smoke column. Horizontally again reappears the belfry of the Franciscan church among the smoke. In the next picture appears on the left the panel where were post the names of the victims caused by Serbian artillery attacks. Urban changed device, taking the one loaded with monochrome film to shot that would be his last, the sequence of five frames in rapid succession showing a new explosion near St. Blaise Church. The smoke and dust expelled shake the flag hoisted on the monolith statue of Roland, protected by a wooden slats parapet. There is no more. Urban was hit in the stomach by shrapnel. He laid face up lifeless. He was 23.

The next day Miodrag Jokic, Deputy Admiral of the federal army, and several Croat representatives agreed to a ceasefire and the lifting of the blockade during talks in Srebreno, south of Dubrovnik. On the month of May isolation had vanished completely. Pavo couldn’t take any picture. 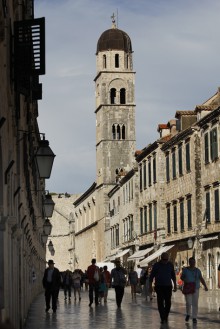