Qairuán has an affordable medina. Not too big and remarkably relaxed. Carpets hang on the whitewashed walls and marquetry decorates windows under a clear blue sky. Traders sit patiently in the shade, on the streets, waiting for a customer in front of their business.

Near Bab Tunis, Tunisia Door, at the end of November 7th Avenue, are piled all types of plastic chattels beside mannequins with faces reminiscent of any kind of Singapore or Hong Kong’s trades, but with Semitic factions. They wear modern Arab women's fashion aside classical trappings, travel bags, tablecloths and other fabrics. 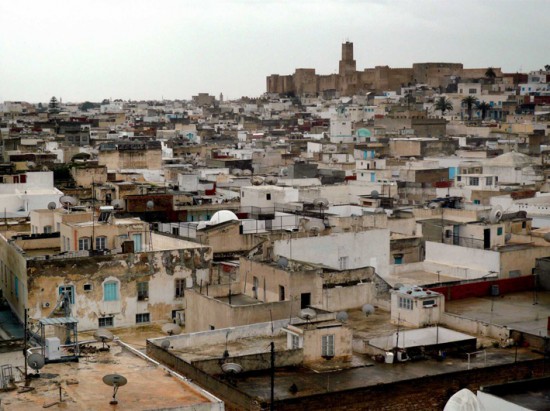 Inside the walled city, the medina, is the Great Mosque, also called Sidi Oqba Ibn Nafi Al Fihri, founder of the city in 670. Not much after Hegira year. Qairouan disputes with Qom, in Iran or Najaf in Iraq being the fourth most revered place in the Islamic world after Mecca, Medina and Jerusalem. Four hundred fourteen columns bearing much of the construction. No two are alike. They all come from ancient Roman and Byzantine churches. Capitals of various orders are lined up one next to another in an endless succession of red ochre. Along the minbar, Baghdad tiles, wood from India, and next, inscribed on the marble in Kufi calligraphy, the four verses of the penultimate Koran sura. The Oneness of God.

A short distance away stands another sacred place for Muslims: the mausoleum of Abu Zammaa al Belaui or Sidi Sahab, once companion of Muhammad. Was said he always carried with him three hairs from the beard of the Prophet. Hence, the mausoleum is also known as the Barber’s Mosque.

Before the Fatimid Caliphate foundation, in the heydays of the Aghlabid dynasty golden age, Qairuán was birthplace of notorious wise men in the Arab world. Born in the city or coming from Al Andalus, as Yahya Ibn Omar from Jaen, who studied in Qurtuba before settling in Qairuán. Or his disciple, physician and philosopher Abu Al Arab, and many others: Ibn Abi Zayd, Al Qâbisi, the philologist Al Qazzaz, the poet Ibrahim al Housri or astronomer Ibn Abi Al Rijal who wrote the astrology book Al-Bari 'fi Akhbar al-Noujoum, translated into Latin in 1087 as Liber Praeclarissimus Completus in judiciis astrorum. 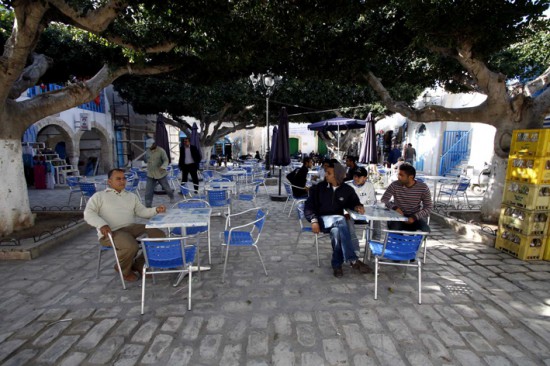 Also Qarawiyyin students left the Barbary and crossed the Strait by the Caliphate of Qurtuba, as Al Khouchani, who at 23 years old arrived in the Andalusian capital, becoming a noted historian. In his book Tabaqat Ifriquiya summarizes the biographies of the most remarkable characters of the Maghreb  to the middle of the tenth century.

Earlier, with the rise to power of Ubayd Allah al-Mahdi Billah start the new Fatimid Caliphate that would extend its control throughout the North Africa to Egypt, where he would found Cairo. Not so far the new capital of the caliphate, initially Qairuán, would move to the tip of Cape of Africa, where Mahdia was built.

In the evening shadows lengthen to slip through Skifa Kahla, also called Bab Zouila. They glide slowly through the seventeen feet long dome where the old fortified gate was the only access to the city. At the other end of the peninsula, at Cape of Africa, stands Bordj el Kebir, the Turkish fortress that defended the city from Spanish, Genoese and Venetian strikes. Before to reach the ancient Punic and Fatimid harbour, extends a huge cemetery that is reflected in the crystal clear waters around Mahdia. Halfway, somewhere between the Bordj and the old door, city dwellers spend their time sipping tea and playing domino under the shade of the trees, in the cafes of Cairo and Khadi en-Noaminé squares.

As shadows flow beneath the vault of Bab Zouila, the same evening sun casts Ribat walls crimson stained. The Ribat, is the fortified monastery in the city of Sousse. The same that, years ago, took to his retreat to already quoted jurist Ibn Yahya Omar. Built in the late eighth century clears, next to the Grand Mosque, the entrance to the old medina in Martyrs' Square. Mosque’s location is not common, as usually are placed in the core of the cities, that’s not the case of Sousse’s. Also lacks of minaret. It’s the simplicity of the Aghlabid architecture. Call to prayer was made from the Ribat’s tower top.

In the rue des Remparts, along with the well-preserved wall surrounding the medina, a small private museum, Dar Essid, is located in one of the oldest city houses. Built in the year 928, recreates the lives of a nineteenth century wealthy Arab family. A patio with Andalusian tiles distributed the access to the rooms. On the top floor a café offers a splendid view of the town, from the Kasbah to the former Phoenician Hadruméte port, nine centuries before Christ and later main Qairuán caliphates harbour.

Leaving the medina, after Farhat Hached square, extends modern Sousse with a traffic jam alike to the Tunis capital rush. Hadi Chaker Boulevard, beachside of Boujaffar is a constant coming and going of people among turmeric and cumin scents, the new fragrance from Roman Hadrumetum. 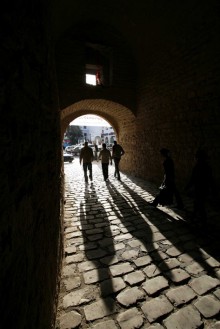 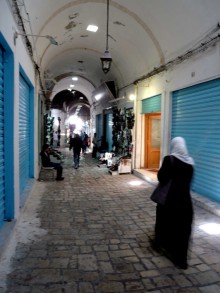