Venier dei Leoni palace overlooks the Grand Canal waters between Da Mula Morosini mansion and the damn Ca Dario. It does not stand out precisely for its height, it is the only one on one floor among its neighbours, however, it houses an outstanding collection of contemporary art, that of Peggy Guggenheim (1898-1979), whom the Venetians fondly called l’ultima dogaressa, the last duchess. 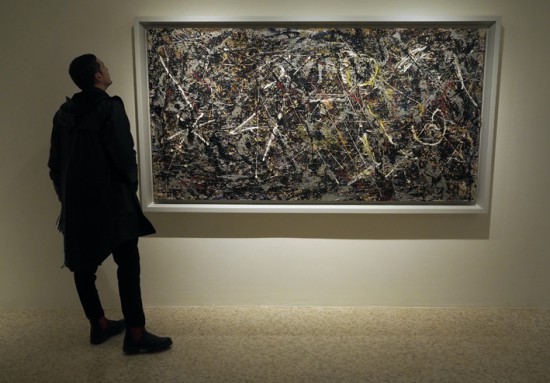 Her interest and contacts in the world of art started in the Paris of the 1930s and led her to open galleries in London and New York. The one in London, inaugurated in January 1938, when she was 39, was the Guggenheim Jeune and there she showed drawings by Jean Cocteau and organized Vasily Kandinsky's first exhibition in Great Britain. In New York, she inaugurated Art of This Century on 30 West 57th Street; it was October 20, 1942.

Again in Europe, the art collector, daughter of a tycoon who perished in the wreck of the RMS Titanic, settled in Venice, there she acquired this Grand Canal palace, where she lived along thirty years. At the 1948 Bienniale, she presented part of her collection and some works by an American artist who was still unknown at the time, Jackson Pollock. Rodolfo Palluchini, secretary of the organization, invited her. In her autobiography, Confessions of an Art Addict Peggy wrote about this Biennale: “My exhibition had enormous publicity and the pavilion was one of the most popular of the Biennale. I was terribly excited by all this, but what I enjoyed most was seeing the name of Guggenheim appearing on the maps in the Public Gardens next to the names of Great Britain, France, Holland, Austria, Switzerland, Poland, Palestine, Denmark, Belgium, Egypt, Czechoskoslovakia, Hungary, Romania. I felt as though I were a new European country”. 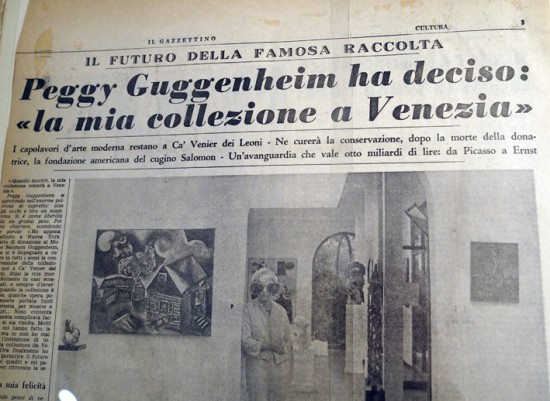 Three years later she would open the doors of the palace to the public, where they could admire her collection of abstract, cubist and surrealist works, continued to organize parties gathering celebrities and kept cruising through the canals in her private gondola. She was 81 years old when a stroke had ended her life on December 23, 1979, in Padua. She was buried in the garden of her palace, where, beside, her fourteen dogs are also buried. In her memoirs, Confessions of an Art Addict Peggy Guggenheim considered Venice a place to fall in love with, rather than a romantic city: “It is always assumed that Venice is the ideal place for a honeymoon. This is a serious mistake. To live in Venice or even to visit it means that you fall in love with the city itself. There is nothing left over in your heart for anyone else”. Since her death, the collection is managed by the Solomon R. Guggenheim Foundation, on which the museums of New York, Las Vegas, Berlin and Bilbao also depend. 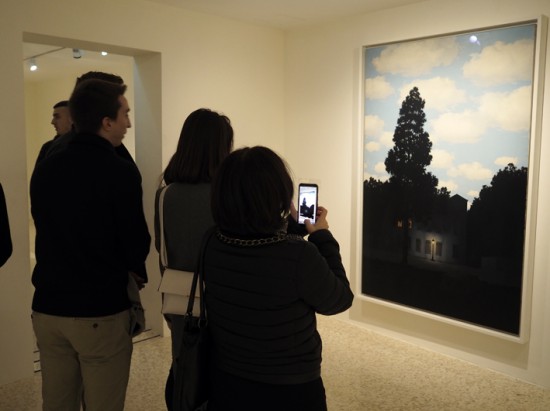 In that area of ​​Dorsoduro neighbourhood there are not many decent toilets, there is one, public, beside Academy Bridge, which charge one euro and a half, you have to carry spare coins to cross the access, and it’s rather a cold place. Therefore, sometimes I decided to enter the Guggenheim’s palace to urinate. It is considerably more expensive than the Academy bridge toilets, but it is decidedly much better decorated, even for those who do not appreciate accurately modern art. Works by Picasso, Braque, Marcel Duchamp, Picabia, Mondrian, Francis Bacon, Kandinsky, Miró, Klee, Max Ernst or Modigliani hang on the walls. Of course, there are also works by what was her revelation artist, Jackson Pollock and my admired L’empire des lumiéres, an oil painting by René Magritte, a landscape in which a night scene coexists in a clear daytime sky crossed by some clouds. It confuses the senses and the reason, but I like it.