Homepage > The Lords of the Isles

The Lords of the Isles

From Northern Ireland coast it’s clearly seen North Channel opposite bank, the steep profile of other lands. If not for water temperature would even be easy to reach swimming. Is the Kintyre peninsula, the island of Mull, and other Scottish coast. Further north, from White Park Bay it’s also seen, further away, the outline of Islay and the Mull of Oa, the Paps of Jura and amid Rathlin Island.

Before was opened by land the road coasting Antrim, access to the county nine valleys was easier by sea. No wonder that once relations were projected to the other coast of the strait before inland. So in the late fifth century already existed an autonomous entity that was known by the name of Dál Riata or Dalriada. This was extended by the present county of Antrim, and by Argyll, Galloway and the islands of the Scottish west coast, the Inner Hebrides. Rome had not fully occupied Brittania neither any of these territories. Pictish tribes inhabiting Caledonia and Scoti or Scotts lineage people came from Northern Ireland who would eventually merge with the Picts to form the Kingdom of Alba, the future Scotland.

According to a more or less mythological version contained in Albanach Duan, the Song of Scots, were the three sons of Erc: Fergus Mór, Loarn mac Eirc and Óengus who conquered the coasts of Alba around 500. Monk Bede’s version in 731 Historia Ecclesiastica Gentis Anglorum mentions a certain Reuda who settled in these shores naming the future kingdom. Dal, in Gaelic, means piece or parcel of land. The sagas, genealogies and kingdoms census were registered in the tenth century in the Senchus fer nAlban, the History of the Men of Scotland.

Migration arrived from Northern Ireland took with them Christianity, writing and language. Light currachs, boats similar to that used by San Brandan in his search of the Promised Land, sailed smoothly between the islands and coasts of the Straits. With Christianity were developed worship centres as Iona, founded by St. Columba and where many Dál Riata kings of were buried. Here were combined styles from Mediterranean, Picts and Anglo-Saxons to produce the extraordinary illuminated manuscripts of the Gospels. It is believed that the Book of Kells began to be written here before being taken to Ireland before the harassment of the Viking expeditions.

Dál Riata saw its heydays in the sixth century and early VII, during the reign of Áedán mac Gabrán, Gabrán mac Domangairt son, when its power was extended up to the Isle of Skye, where the clear waters as nonexistent rush into the sea on the cliffs of Kilt Rock. Or west up to Dunseverick Castle, where Fergus Mor MacEre, Fergus the Great reigned. Expeditions of Dál Riata came to loot the Orkneys and the Isle of Man.

The glory declined after the battles of Degsastan, probably Dawstane near Liddesdale, Scotland, and Mag Rath, currently Moira, County Down Northern Ireland. The first against the king of Bernicia, the Anglo Æthelfrith. The second fought for days, in the summer of 637, near the Woods of Killultagh, faced the forces of Irish King Domnall II against his own son Congall, who brought support in Ulster and Dál Riata. Thousands of bodies of men and horses were found in the early twentieth century during the construction of the railway on the outskirts of Moira witnessing the magnitude of the fight. The simultaneous loss in the Mull of Kintyre waters determined the lost of territories northeast of Laugh Neach.

During a long period of instability land easily changed hands between Irish clans and Pictish kings. Until the arrival of the Vikings. Once ended the years when they were just satisfied in raiding they settled in the islands they called Nordreyjar and Sudreyjar. The first are the Orkneys and Shetlands, the second the Hebrides. Coastal areas remained under Gaelic control while the archipelagos became the Isles of the Foreigners: Innse Gall. In the late ninth century emerged a new Kingdom of the Isles upon the ashes of what had been Dál Riata. According Orkneyinga Saga when Harald Fairhair ascended the throne in Norway many of his opponents fled to the Scottish islands. Harald sent Ketill Flatnose in pursuit. However he chose self-proclaiming King of the Isles.

The Kingdom of the Islands for a period was known as the Kingdom of Mann and the Isles, dealing on equal terms with the English kings. Though Norwegian monarchs sometimes controlled, at the end of the eleventh century Magnus Barelegs held power until Godred Crovan and his sons ruled from the Isle of Man. Here are traces of their presence in the form of burials and remains of settlements. As their ships, the famous drakkar longship, their homes were also elongated. In the parish of Marown, at the archaeological site known as The Braaid, remain two houses of sixty five feet long by thirty feet wide. In Balladoole, also in Man, was found an inverted ship shaped burial. Inside were the remains of a Viking man richly dressed next to a horse and cattle.

Godred Crovan, or Gofraid mac meic Arailt, had Viking and Gaelic blood, dominated Dublin until he was expelled and went to the conquest of the Isle of Man, where according to the Chronicle Regem Mannie et Insularum, he and his sons Lagmann, Olaf and Harold reigned over the islands. In Manx folklore has remained as King Orry. On the outskirts of the coastal town of Laxey are the remains of a burial they call King Orry's Grave, Tomb of King Orry, although actually is a set of two Neolithic burials. 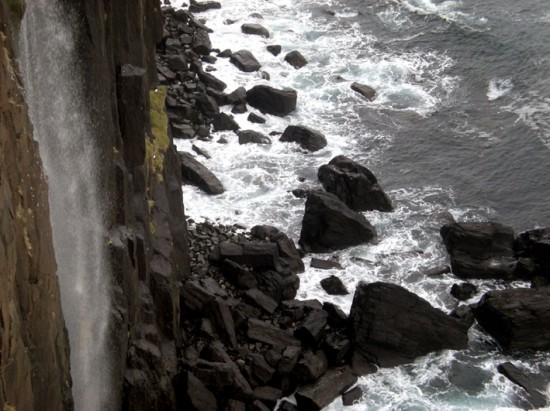 Crovan rule would be contested by the Lord of Argyll, Somerled. Somairle mac Gille Brigte, who in January 1156 was proclaimed Insularum Rex. Somerled literally means summer visitor, as Vikings were called, but he was not a tourist. They fought each other in the Battle of Epiphany. Somerled led a fleet composed by eighty galleys and four thousand men, a thousand more than now inhabit the island of Islay. Here was the centre of power moved, on Lake Finlaggan, near present Ballygrant. The lake has three islands, the two largest are Eilean Mor, the largest one, and Eilean na Comhairle. The latter was the seat of the council presided by Somerled’s offspring, the MacDonald clan and here were crowned the new Lords of the Isles. In Eilean na Comhairle, upon the ruins of an ancient fortress was built a castle in the thirteenth century. Eilean Mor have also been fortified. Inside would have housed at least two dozen homes. And among them, a large room, nearly two hundred square meters with stoves and ovens, as well as the residence of the lords and a pair of springs. From all of this only vestiges remain. In the ruins of the fourteenth century chapel, there are several headstones with effigies of warriors engraved on them. One represents Donald MacGill-Usibeag, clad in Highlands armour and a galley at his feet. There are similar graves in what remains of the old Kildalton church, also in Islay, near Laphroaig, Lagavulin and Ardbeg distilleries. Others not so different stands in the ruined monastery of Dungiven, near Londonderry, on the tomb of medieval chieftain Cooey na Gall O'Cahan, guarded, sword in hand, by the figures of seven Scottish Gallowglass mercenaries.

In 1265 the Lordship of the Isles was annexed to the burgeoning realm of Scots who already got, southwards, his own enemy: England. 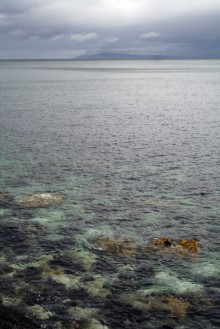 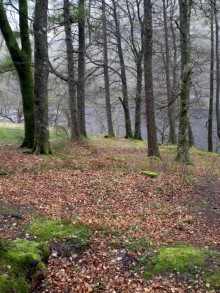