Neither the latest nor the greatest, but it is certainly the best recognized by the structure of the two neo-Gothic towers that support it. Its the silhouette contained in some famous Brit comedies logo. Tower Bridge is crossed daily by over forty thousand people and is a consolidated icon of the identity of the City of London. 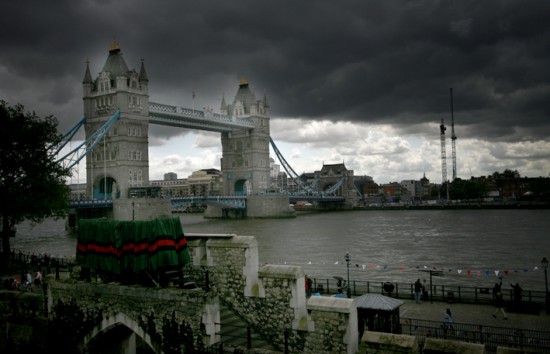 It was built in the late nineteenth century, between 1886 and 1894, after a eight years work. Four hundred thirty two people cooperated to open a new crossing over the Thames near the Tower of London, east of the City. It was inaugurated on June 30 by the Prince of Wales and then future King Edward VII.

The fact is that the harbour was then located west of the existing Docklands forcing to design a lifting structure that would allow sailing. The measures of the work of Sir Horace Jones, municipal architect, reach more than seven hundred yards in length, including the approach segments, although the breadth of the river at this point is 293 yards. The bascule of its two spans is two hundred feet long, slightly less than the height of the two towers reaching two hundred thirteen feet high. The width of the roadway does not exceed twenty two feet. Each of the central section weighs one thousand tons that rise in one minute thanks to the hydraulic devices that initially worked with steam engines and were replaced in 1976 by new electrical systems. 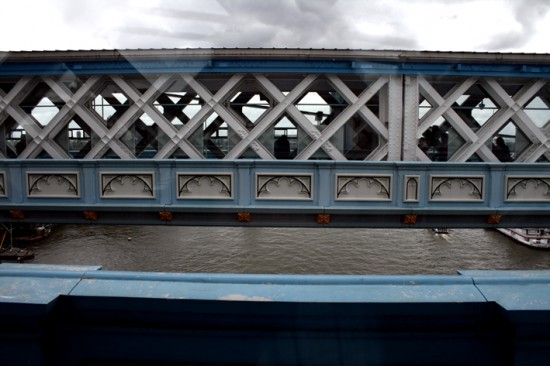 The two top walkways were designed to cross on foot while the underpass was lifting, but in 1910 were closed because they were misused, pedestrians who crossed the bridge preferred to wait rather than ascending, moreover if they were carrying loads. Upstairs, at 143 feet from the water, the bridge gained an unpleasant reputation due to the presence of prostitutes and pickpockets who also finally ran out of customers. In 1982 they were given a new use, as well as a lift to reach them. Since that year there’s a permanent exhibition, The Tower Bridge Experience, which explains the history of the bridge. The eastern gateway houses a photographic exhibition of worldwide iconic bridges. Also there’s a visit to the old Victorian machines room. Since December 2014, the Tower Bridge unveiled a new glass floor across the West top walkway. It has been mounted with six panels supported by a carbon steel framework. Each glass panel weight 1170 pounds and measures 36 feet long by 5 feet wide. Views under visitors own feet are breathtaking with the Thames, cars and pedestrians all moving nearly 140 feet below. 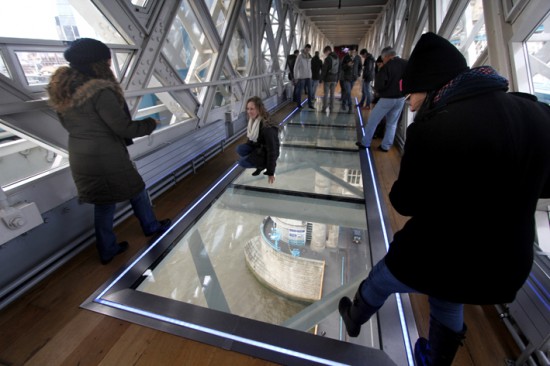 Looking up again, from the walkways, there is a good view of the Thames on both sides. To the east, towards Greenwich, on Sainte Katharine Docks and Canary Wharf. To the west, over the London Tower and the skyscrapers of the City, the new city hall and The Shard skyscraper in Southwark. Before listing the following bridges starting with London Bridge, there’s HMS Belfast, a light cruiser of the British Navy that it has been permanently moored as part of the Imperial War Museum.

The bridge has appeared in numerous films and television series. One of the pioneers was the actor John Wayne in Brannigan (1975), starring a spectacular car chase jumping from one span extreme to another while it was hoisted. Also would be used it as a background stage in Danny Boyle’s Trainspotting (1995), Sharon Maguire’s in Bridget Jones's Diary (2001) and Woody Allen’s Cassandra's Dream (2007), although arguably one of the most original was the spot opening 2012 Olympics when appeared Daniel Craig as James Bond with Queen Elizabeth in person to parachute over the Stadium. Before landing the helicopter coming from Buckingham Palace crosses the bridge under the Olympic rings suspended from the upper walkway. 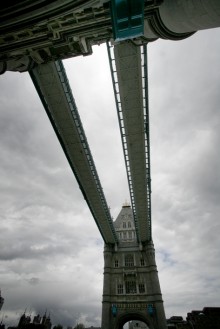