Dutch painter's relationship with Arles was peculiar and productive. Essentially productive. Only in the period he spent in Arles concluded about three hundred canvases, sketches and drawings. It was the most prolific and highest quality in his short career. In Provence he sought light and he found it.

Vincent got off the train on Monday, February 20, 1888, took a few steps down the rue de Stalingrad up to the Lamartine Square. When he crossed headed the rue de la Cavalerie. In the number 30 he stopped. It was the first place he found to rest and stay, the Hotel Restaurant Carrel, five francs a day, a bulky figure for his budget if not for the help of his brother Theo. It was cold, it was wintertime in Arles: il y a partout au moins 60 centimétres de neige de tombée, et il en tombe toujours. (There’s everywhere at least 60 centimetres of snow, and still falling.)

At first he began painting almond trees, even inspired by the Japanese style. When he goes out and recognizes the city and its surroundings. In March found some washerwomen next to a drawbridge. Installs his easel and gets to work. The canvas will end be called Le Pont de Langlois aux Lavandieres describing to his brother: c’est un pont-levis sur lequel passe une petite voiture, qui se profile sur un ciel bleu… (on the drawbridge a small car stands out against the blue sky...)

Between March and May, even painting tirelessly he finds time to read Daudet, Zola, Balzac and Victor Hugo. He take portraits of the bar patrons and invites them to a drink to pose. He befriends the Roulin family, who also portrays. He works with the idea of ​​hosting a workshop for a group of painters. For that reason he remains in touch with Paul Gauguin, who was then living in Pont-Aven in Brittany, and with Emile Bernard. In May he rent the house number 2 Lamartine Square, near the hotel where he lives. And he wrote to Theo: J’ai loué un atelier, maison entière a 4 pieces (fr. 180 per an). (I've rented a workshop, a whole four rooms house (180 francs per year). It is the famous yellow house, of course, reflected in a canvas and which he’ll share with Gauguin along two months in autumn.

In June he travels for six days to Saintes Maries de la Mer, where he painted three canvases and eleven drawings. He painted the church from the outskirts of the town and the fishing boats stranded on the beach. He is surprised by the colour of the sea that says that a une coleur comme les maquereaux c’est a dire changeante, on ne sait pas toujours si c’est vert ou violet, on ne sait pas toujours si c’est bleu, car la seconde après le reflet changeant a pris une teinte rose grise… (has a colour as sea mackerels, i.e. changing, you never know if it's green or violet, and never know if it is blue, because the next second the changing reflection has taken a pink tinge or grey ..)

In July also went out from Arles, up to the close Montmajour Abbey, where he spends the Tuesday, May 3, making sketches and drawings of the tower, the gateway, the refectory and the abbey itself. Do not forget to give news to Theo: je rentre d’une journée à Montmajour et mon ami le sous-lieutenant m’a tenu compagnie. Nous avons alors à nous deux exploré le vieux jardin et avons volé d’excellentes figues. (We come back from a walk in Montmajour, me and my friend Lieutenant who has accompanied me. We explored the old garden and stolen some excellent figs.)

In August he paints Le Café le Soir, which is in the Forum Plaza, a place Van Gogh frequented. C’est ce qu’on appelle ici un “café de nuit”; ils sont assez fréquents ici qui restent ouverts toute la nuit. Les ”rôdeurs de nuit” peuvent y trouver un asil donc, lorsqu’ils n’ont pas de quoi se payer un logement ou qu’ils sont trop sauls pour y être admis. (This is what is called here a "night café" (very common here) that stay open all night long. The "homeless night owls" can thus find a place where to stay when they don’t have to pay for a room or when they are too drunk for admission.) The painter is amazed by the colours and with the fact of capturing a night scene without using the black tube, solving the scene with blues and violets. September arrives and the news of the probable arrival of Gauguin precipitate arrangements in the yellow house. Van Gogh buys two beds, a dozen chairs and a table, all in white wood.

Gauguin arrives in late October, on 20. They go together to paint Arles landscapes, including the series of Alyscamps necropolis. They also made some portraits each other. Vincent talks about their relationship: Gauguin Il est bien intéressant comme ami, il faut que je te dise qu’il sait faire la cuisine parfaitement, je crois que j’apprendrai cela de lui, c’est bien commode... Cela me fait énormément de bien d’avoir de la compagnie aussi intelligente que Gauguin et de le voir travailler. (It is very interesting as a friend, I have to tell that he is a good cooker, I think I will learn from him, it’s very comfortable... Gauguin gives me courage to imagine and things of imagination acquire certainly a more mysterious character.) But coexistence in the yellow house workshop deteriorated. It concluded with Van Gogh’s earlobe cutting. It happened on December 23. Vincent was admitted for two weeks at the Hôtel Dieu hospital in the city. The day after Gauguin went back to Paris.

When Van Gogh left the hospital, he painted two versions of the self-portrait with bandaged ear. Four weeks later he was to be admitted again, but this time because of his mental problems. There he would make some paintings and drawings. Le jardin de la maison de sante is one of them. Van Gogh describes the vegetation in great detail to his brother: parterres de fleurs, de myosotis, des roses de Noël, des anémones, des renoncules, de la giroflée, des marguerites, etc…Et sous la galerie des orangers et des lauriers-roses. C’est donc un tableau tout plein de fleurs et de verdure printanière… (flowerbeds, myosotis, Christmas roses, anemones, ranunculus, clove, daisies, and so on... and in the gallery orange trees and oleander. It is a board full of spring flowers and plants...)

On May 8 he will begin a new period. He enters voluntarily at the sanatorium of Saint Paul de Mausole, on the outskirts of Saint Remy de Provence, about twenty miles away from Arles. There he will spend a full year in which, except for three relapses he didn’t stop painting. He was interested in the olive trees growing nearby. On May 25 sent a letter to Auvers sur Oise, addressed to Joseph Jacob Isaacson: L’effet du jour, du ciel, fait qu’il y a à l’infini des motifs a tirer de l’olivier. Or moi j’ai cherché quelques effets d’opposition du feuillage changeant avec les tons du ciel. .) (The effect of daylight, of the sky, means that there is an infinity of motifs to be drawn from the olive tree. I myself looked for some effects of opposition between the changing foliage and the tones of the sky.) In those days Van Gogh starts his characteristic styles with swirls and spirals in their brushstrokes. On May 16, 1890 leaves Saint Remy and from Tarascon, return to Paris, before settling in Auvers-sur-Oise, near the capital, where he died two months later caused by a shot.

His memory is still alive, really alive, in Arles. The council has designed a circuit to follow the places where the Dutch painter planted his easel. They are marked by what appears to be his figure shape walking loaded with all the painting utensils. In front of each landmark there is a panel with a copy of the canvas and a brief explanation. In the square there is no longer Lamartine number two house, the yellow house, which was destroyed during the bombings of World War II. Continuing along the avenue de Stalingrad, towards the railway station, i.e. in the opposite direction to that Van Gogh walked in February 1888, some buildings, except for the colour of the facade, still remember the house there was yellow. The Langlois Bridge has been rebuilt and moved from the original location on the channel of Arles to Bouc, but still appear amateur painters and Japanese tourists. In the Forum Square, the café de nuit remains yellow, perhaps excessively. Now is called Café Van Gogh and it is popular with Japanese visitors who ask how it is cooked the Daube of Taureau or poulet a l'Arlesienne advertised on the menu. The Hôtel Dieu has become the Espace Van Gogh, has mended his garden and has opened a multimedia library.

And at 35 rue Dr. Fanton has been installed the Van Gogh Foundation, opened in April 2014, where are exposed some original drawings and detailed aspects of the work of Vincent Willem van Gogh. 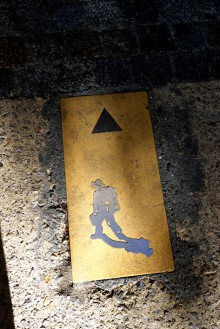