It is the main Batak sorcerer’s tool. With it they call the rain, the welfare and protection for the community, keep enemies away, is the panacea for almost everything. They call it tunggal panaluan or tunggal malek or malehat. It’s the priest's magic wand. 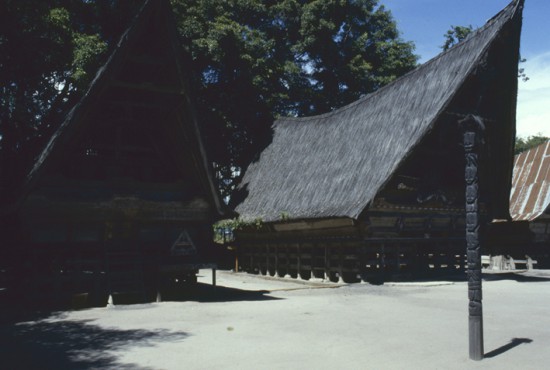 Batak had been a nomadic and warlike people, probably original from Taiwan or the Philippines, they settled in the Lake Toba and the surrounding regions in North Sumatra. They had been head hunters and had practiced cannibalism until the early nineteenth century when Dutch and German missionaries come to Christianize them. Their wooden houses are inverted boat shaped and are supported on piles. In every house live several families sharing a common corridor and lounge. The front, a wide ledge that projects to the void is decorated with floral and geometric designs and with mystical and mythical creatures painted in bright colours, usually white, red and black, often crowned by a buffalo head carving, sometimes even by the real animal antler.

Batak villages had their own elders and leaders council responsible for overseeing the ceremonies and administering justice, as in the case of the town of Ambarita, on Samosir Island on Lake Toba. At old times, they sat in Huta  Siallagan, a courtyard of the village where there is still a group of stone chairs. They deliberated at a table. Just beyond, on a slab ran ceremonial human sacrifice.

The existence of Batak was already documented since the thirteenth century. During the Song Dynasty, a customs inspector from Quanzhou named Zhao Rugua, wrote two volumes in 1225 called Zhufan Zhi, Description of the Barbarians, which refers to place of the Kingdom of Srivijaya called Ba-ta. In 1292 Marco Polo relates an encounter with man-eaters Battas on the east coast of Sumatra. Another Venetian, specifically from Chioggia, Niccolò de Conti, spent most of 1421 in Sumatra and subsequently published as a chapter in the book by Poggio Bracciolini De Varietate Fortunae his Travels of Nicolò Conte in the East in the Early Part of the Fifteenth Century, where he talks about cannibals called Batech living continuously at war with its neighbours. Sir Stamford Raffles would study their rites and customs in 1820 confirming its consumption of human flesh.

Despite the adoption of Christianity they retained animist beliefs, the spirits of the ancestors, places, sacred stones and trees. The Tondi, the vital essence comparable to the soul, is transmitted between organisms,  transmigrates. The datu are sorcerers who possess knowledge of the occult, witchcraft and divination. A tool for managing this knowledge is tunggal panaluan a magic wand over five feet long that interfaces between the shaman and the unknown, the antenna that captures the spells and the instrument involved in healing. For divinations one egg were buried underground and along the shaman’s trance, dug his wand into the ground repeatedly. It was considered a good omen if he  hit and crash the egg. 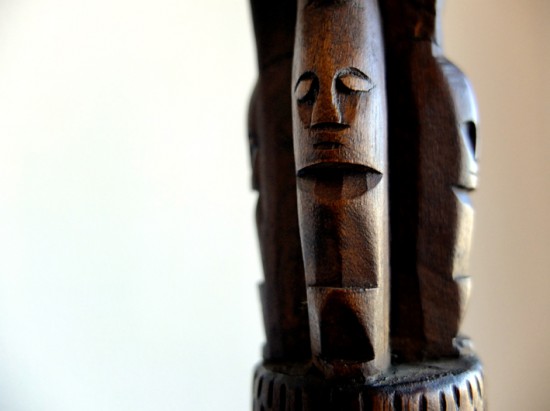 The tunggal panaluan should be made by the datu himself. It takes time and a symbolic process that involves sacrifices as before start using it must become alive. This is done by placing a special mass called pupuk made with some animal remains. Formerly were victims of human sacrifice. The priest applies the  pupuk, dance around and speaks as if it would be a human being or a living creature. The magical powers are also added to the pole by the figures carved on it.

The top usually represents a rider with his horse. His head, and cane’s, are topped by a bunch of feathers and horsehair, fixed by a woven thread also wraps pupuk. Under the first figure will follow others increasingly smaller in size, more characters and intertwined snakes, lizards and other animals, reptiles generally, related to the Batak cosmogony.

No related myths missing tunggal panaluan. One of them relates the origin of the stick in Pusuk Buhit legendary mountains, where lived a man named Hatibulan. His wife gave birth to twins, a boy and a girl, a bad omen in the dry season, so it was suggested they wouldn’t grow together. So sending the boy, Si Aji Donda Hatahutan, to the west and the girl, Si Boru Tapi na Uasan to the east, but the father ignored the warning. The children had grown and a day comes when Si Boru found in the woods a large thorny tree called hau Tada Tada, however, had some attractive fruit. Perched she ate one of them. Shortly after the tree swallowed her leaving out her head in sight. His brother, who was in search of his sister, followed, also ended up engulfed. Then hau Tada Tada also swallow the dog and a magician who came to the aid of the family, a snake and so until seven beings. On the advice of another magician the father of the twins cut the tree and carved their wooden effigies successively along a rod. The seven spoke through the mouth of a magician, blaming of his fortune on the sculptor, the knife and the smith who had forged the knife, until they themselves were blamed for eating the fruit of the tree hau Tada Tada. The spirits of the seven returned to the wand and thereafter it served to call or drive away the rain, to give wise advice and to assist in the war, disease and death. 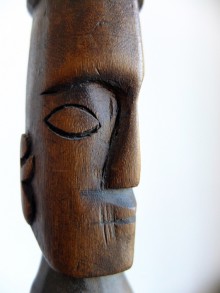