Homepage > A Shard on the Clouds

A Shard on the Clouds

In September 2007, start the Southwark Towers wrecking works, an office complex twenty four stories high. It was paving the way, literally, to develop the project of the Genoese architect Renzo Piano, a sliver of glass that would tear the sky clouds above London. 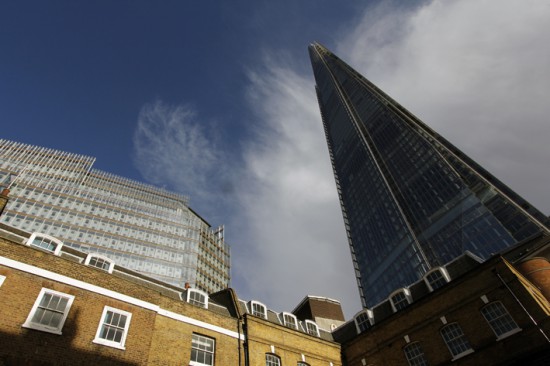 And that's what happened on February 2013 when it opened to the public The Shard, at that time the tallest skyscraper in Europe with its 1004 feet high and 72 floors, 87 counting the pinnacle. It is far from the highest skyscraper in the world, a title almost unchallenged before the tower Bhurj Khalifa in Dubai with its and 2722 feet, in fact soon and was surpassed in Europe by Moscow’s Mercury Tower with  1112 feet high, 108 above British building.

Its stylized pyramid shape is completely coated glass splinter in the dome opening outdoors the last fifteen stories whit its ventilation ducts. The translucent walls allow natural lighting and reduce heat loss through its eleven thousand panels, 56,000 square meters of glass. The architect proposed combine spaces for the use of the building among offices, housing, hotels, shops and restaurants. In fact up to the 28th floor is reserved for offices, between 31 and 33 there is a shopping centre and a restaurant, between 35 and 51 a luxury hotel, at the 52 a spa and 53 to 65 are reserved to apartments. But The Shard only offers 48 parking places. The idea and the purpose is that the twelve thousand people who work in the offices would have access within minutes to London Bridge station served by the Northern and Jubilee underground lines and the railroad. 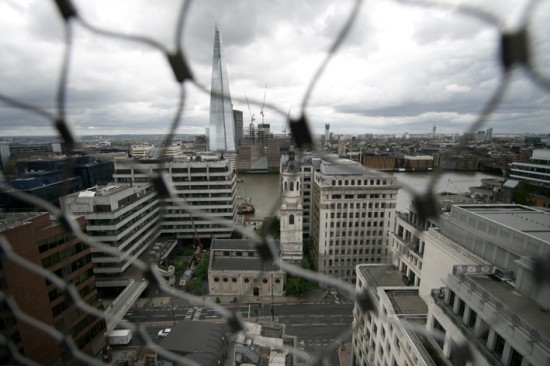 The Italian architect also believed that the highest point of London should be publicly available, paying of course, so this have been the design of the last working plants, between 68 and 72, to place a multi-story observatory called The View. An elevator that despite its speed doesn’t produces dizzyness leads in two sections to the 68 floor. This and the immediately upper are covered view points, sheltered from the weather. Stairs lead up to the outside observatory deck on the 72 floor, skyscraper’s last at 802 feet above the city, almost double that provided at its peak the London Eye and claim that on a clear day the view reaches up to 40 miles away.

This latter outer viewpoint, although protected by the last shard crystal plates, provides a curious aerial feeling, reinforced by faint background music and sounds coming from the city brought by the wind. Upward to the top of the tower, pinnacle metal structures appear extended, following the path that marks the glass, into an unknown infinite. To either side or down, always down, can be seen the various Thames landmarks in its way to the sea. From the Big Ben to the Docklands near Greenwich.

From the ground, in a classic day of mist, looking up should not be hard to imagine the big sliver of glass cutting finely the cloud ceiling often covering London. Then the viewpoint is surrounded by a large white carpet only a few timid competitors protrude. 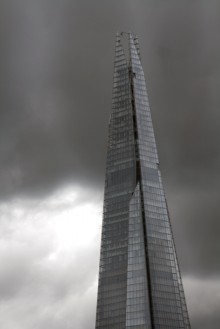