Homepage > A Walk around Philopappos

A Walk around Philopappos

Athenian Acropolis faces a large green area which, in the heart of the Greek capital, becomes a relaxed space where walk away from the urban bustle and beneath the shade of holm oaks and cypress trees. It is Philopappos Hill. From here there are privileged views over the Parthenon, Athens and even up to the waters of the Saronic Gulf, in the Aegean. 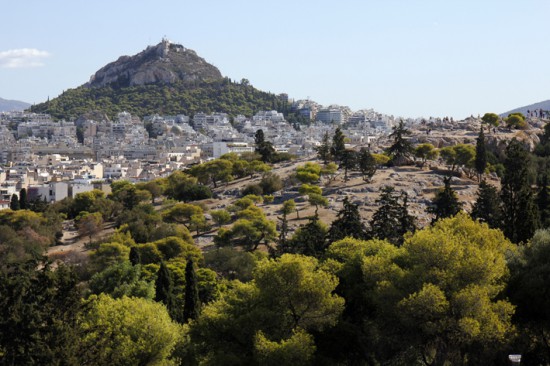 Gaius Julius Antiochus Epiphane Philopappus, Julius Antiochus Philopappos in a reduced version. King Antiochus IV grandson he was a prince of the ancient Armenian kingdom of Kommagene annexed by the Roman Empire in the confines of Syria. Philopappos lived between the first and second centuries, he was born in the year 65, during the domination of the Roman Empire in Greece. His family moved to Rome in the aftermath of the conflict with Parthia and he later moved to Athens where he lived until the end of his days having become a benefactor and influential citizen. Linked to the Roman elites he had friendship with the Emperor Trajan and his heir Hadrian. His death, happened in year 116, had a wide repercussion in Athens to the point to dedicate him the great monument that crowns the hill that today bears his name.

The Mausoleum, facing the Acropolis, forms a two-storey semicircle built with marble from the nearby Pentelicus and Hymettian Mounts and reaches almost thirty feet in height. Its inside contained the funeral chamber but just the base remains while two-thirds of the structure still stands on its façade. The monument was preserved practically intact until the fifteenth century as Ancona humanist Cyriakos of Pizzicolli saw in 1436 and documented in his diary Commentary, Philopappos statue on the upper level preside the monument and beside two other statues represented his grandfather Antiochus IV and Seleucus I Nicator, satrap of Babylon and founder of the Seleucid Empire, this latter disappeared. In the lower level a frieze represents him as consul, driving a chariot. An inscription in Greek, Φιλόπαππος Επιφάνους Βησαιεύς, recognizes him as son of Epiphanes of Besa. Another inscription in Latin recalls his honorific titles. Pausanias mentions it in the Book I of his Description of Greece as the monument built for a Syrian man. The mausoleum suffered severe destruction in the seventeenth century during the Turkish-Venetian wars. The Ottomans used construction material for the Parthenon mosque minaret, and the Venetians did not hesitate to bomb the Acropolis from Philopappos Hill on September 26, 1687.

In the mid-18th century Scottish archaeologist James Stuart and the British architect Nicholas Revett devoted their time and efforts to illustrate and document numerous monuments of ancient Greece, including, of course, Philopappos mausoleum. His work was published in London in 1762 under the title The Antiquities of Athens and Other Monuments of Greece. In the lithographs, much to the taste of the time, such as the work of Baron Taylor's team in France, reproduces the state of the tomb as well as a scale reproduction of its ideal state when it was built except the appearance of the missing statues. In 1904 it would be partially restored under the supervision of the civil engineer Balanos. 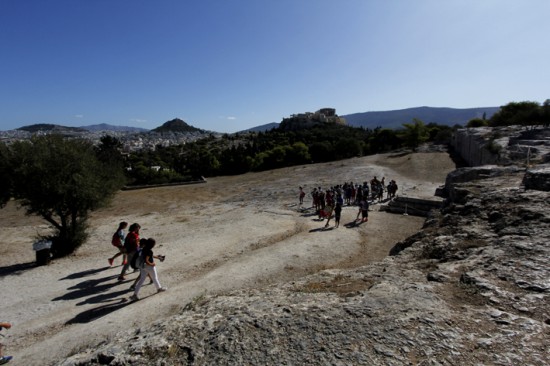 It is believed that previously the poet of the 6th century BC Museaus of Athens, who was said lived, taught and died on the place and also he was related to Orpheus, was buried in the same place. According to Plato, both were sons of Selene and the Muses. In any case its name is linked to the one of the hill, also known as hill of Museaus or of the Muses as Pausanias wrote, before that of the Mausoleum or of Philopappos. Not far away from the mausoleum there is a section of rock carved with cavities that should serve as a base for sculptures and altar offerings in what is supposed to be a shrine dedicated to the muses and today is called Heeron of Museaus.

The hill, which according to legend was the scene of the battle of the Athenians against the Amazons, reaches about four hundred fifty feet above sea level providing an excellent panorama on the city. The park occupies about 70 hectares of green zone that was arranged between 1954 and 1958 by the architect Dimitris Pikionis who created the stone paths and designed the accesses. Here numerous birds are sheltered among them the Athens owl which currently illustrates the one euro coins and before the ancient drachmas.

Stone large blocks in ruins run along the crest of the hill. It is the Diateichisma, the wall that, since the fifth century BC, was part of the defences of Athens, strengthened after the battle of Chaeronea in 338 BC in the face of the growing threat of Macedonia. The wall, about nine hundred yards long, had two doorways, the one of Millipedes in the higher side and another next where St Demetrius church stands, where are the rest of the Dipylon.

Following the path that leads to the north of the hill are the caves excavated in the rock, four rooms closed with iron bars, called Prison of Socrates, since it is said that it is where he was confined and where the philosopher died. During World War II they were used to hide some of the antiquities of the Parthenon and the National Museum of Archaeology. Not far from there are similar ones: the Sanctuary of Pan and the so-called Deaf Man's Cave.

Where the promontory descends before becoming Pnyx hill stands the twelve century Byzantine church of St Demetrius Loumbardiaris restored by the mentioned Pikionis. And a few steps further is the place where the ancient Athenians met ten times yearly in ekklesia, assembly, to discuss political issues since Cleisthenes ceded power to the citizenship in the year 507 BC, this is the so called Pnyx that gives name to the hill. The space is formed by a large circular stone platform that took advantage of the hillside as if it were a theatre with some steps carved in the end leading to the rostrum where the speakers addressed to the public. Here spoke Pericles, Aristides and Alcibiades among others and Demosthenes launched his famous Philippics against Philip of Macedonia. The site was excavated in 1910 by the Archaeological Society of Athens, excavations that resumed in the 1930s, revealing the foundations of some featured buildings, all of which were built when the site was no longer used for the assemblies: two great stoas, the altar of Zeus Agoraios and the sanctuary of Zeus Hypsistos.

Nearby is the dome of the old observatory before reaching the National Observatory of Athens which, despising city’s light pollution, opened here its telescope to the sky since it was founded in 1842. Almost at its feet, going down, is Agia Marina Orthodox Church looking like a piece of cake, very close to the hill of Aeropagus, another good viewpoint with on the Acropolis. Its name comes from Ἄρειος Πάγος, Areios Pagos, the rock of Ares that the Romans turned into rock of Mars, God of War. Before the fifth century BC, the council of elders who, at the time, accepted the democratic reforms proposed by Solon, met here. Aeschylus, in the Euménides, the last piece of the Oresteia, used the hill as scene for Orestes trial by the murder of his mother Clytemnestra and her lover Aegisthus.