It is not just a London street neither a cover of the Beatles. There are plenty of Abbey Roads, Abbey streets, Abbey lanes or alleys or passages in Irish geography. The spread of Christianity by the early monks and friars caused the proliferation of abbeys, rural churches and convents when early Irish saints stood by the altar. St. Patrick, St. Kevin, St. Brendan and others, were responsible for founding the first monasteries. The beginnings of Christianity on the island were distinguished by the monastic character of its church. 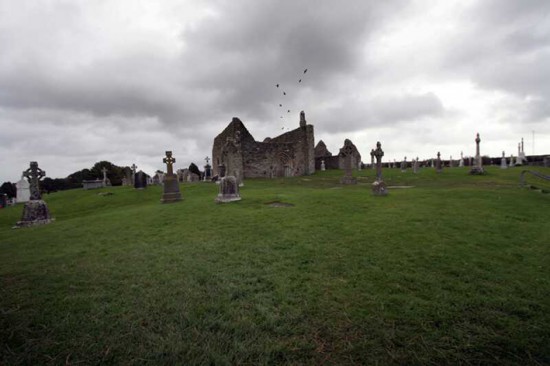 One of the first religious centres of the British Isles was established at Iona in the Inner Hebrides, near the coast of Scotland, in what was then the kingdom of Dalriada. One of the princes of the royal house of the Uí Néill, in Ulster, Colum Cille, who became St. Columba, settled there in 563 and founded what would become the core of Irish Christianity. Monasticism was founded on the mortification of the body through hard work executed as a sentence against desires. That philosophy leads St. Kevin to the Wicklow Mountains where he used to sleep in a stone bed and take iced water baths in a nearby lake. Legend, maybe a bit excessive, told about a blackbird perched on his hand while he stretched. To avoid disturbing the bird Saint Kevin didn’t withdraw the hand but allowed the bird to nest remaining motionless until the offspring born from eggs did not undertake the flight. At the time when the first monasteries were erected there were no significant populated centres comparable to Roman cities nowhere in any of the five Irish kingdoms, mostly rural. The monasteries attracted, in addition to faithful acolytes and novices, artisans and merchants. The walled scholastic centres provided protection in the turbulent years that followed the fall of the Roman Empire. Bangor came to house four thousand monks. Clonmacnoise three thousand. In addition to each of the buildings where clergy lived, were also built cathedrals, churches and chapels, workshops and laboratories. A characteristic feature was circular towers used to watch out and store the most precious assets of each community in an easily defensible location. Usually towers entrance was eased by a removable ladder, which, to avoid plundering, was often placed more than nine feet off the ground.

They were also first-rate academic centres where the ancient art of the Celtic La Tene melted into the shape and form of a new art that would be reflected through the beautifully illustrated manuscript paper or by the Gospels carved in stone crosses.

After Iona, the first monasteries were erected on Inishmore, the largest of the Aran Islands, and Skellig Michael, located on an islet fourteen kilometres off the coast of Kerry. The vast majority of them were founded on the sixth and seventh centuries and remained active for long centuries. Those who survived the Viking raids should expect the onslaught of Danish, English or the Irish either. Currently most preserved in ruins, or have been occupied by cemeteries spreading around, but also have begun to protect and preserve the historical heritage they represent.

South of Dublin, in the Wicklow Mountains, is the place where St. Kevin endured the blackbird nest it in hand. It’s called Glendalough and comes to mean valley between two lakes. Fairly well preserved, the complex is divided into two areas, corresponding to the lower and upper lakes. In the first is the cathedral, one of the largest Christian churches in Ireland. Dedicated to St. Peter and St. Paul was active until 1214 and it houses some early Christian’s ancient graves. One of them asking a prayer for someone named Diarmuit. In the lower lake area are still three more churches: St. Kieran, St. Kevin's Kitchen and Saint Mary, in addition to the ninety nine feet high circular tower. Lakeside is a small cave above where supposedly slept the saint founder: Saint Kevin's Bed. In 1214 the diocese of Dublin and Glendalough merged in benefit for the bigger of them: Dublin, starting so the decline of the centre of the two lakes. 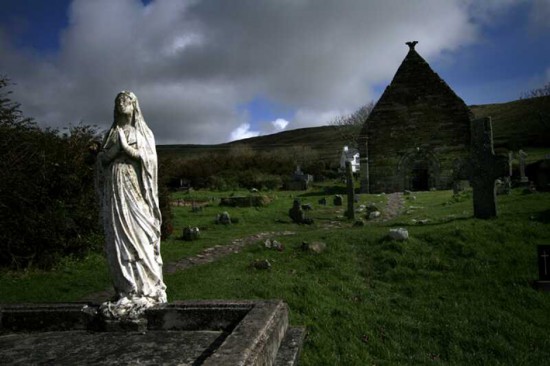 In the opposite direction, north from the capital, is Monasterboice. Founded in 521 by St. Buithe, Buite, Boyce or Boethius, sheltered monks and nuns, and was occupied by Vikings in 968 until Donald, the king of Tara, expelled them. In 1097 a fire consumed the circular tower unfortunately destroying much of the library that was kept there, supposedly well protected. Monasterboice is known for its Celtic cross, the more finely carved around the country, the Muiredach Cross. In 1142 the construction of nearby Mellifont Abbey, Cistercian main centre, was the beginning of the end.

In the island’s centre, at the Shannon River shores grew up Clonmacnoise monastery. Cluain Mhic Nois, the meadow of the sons of Nóis. Until the ninth century was associated with the kings of Connacht, who teamed up with Meath. It was visited by scholars and students from all over Europe and there lie buried some kings of Tara. Is quoted several times in the Chronicum Scotorum: in 646 Diarmaid went to battle, went through Cluan-muc-Nois and Ciaran congregation prayed for him. In 1179 hundreds of homes and thirteen churches were concentrated in the enclosure. In 1552 an English regiment looted books, stained windows and even bells. The Cross of the Scriptures is one of the most notable elements, next to the Tur Uí Ruairc, or tower O'Rourke. Built in the tenth century as a defence bell tower was struck by a lightning in 1135. Never again was restored and that's how it is seen today. In the McDermot Church monks confessed lepers at distance, thanks to the acoustic effect enjoyed by the front door. In the Cathedral, near the altar, from 1198 lie the remains of Rory O'Connor, the last great king of Eire.

The Holy Cross Convent, Dominican monastery in the town of Sligo, was built in 1253 by order of Maurice Fitzgerald, Baron of Offaly, who also introduced in Ireland the Franciscan order. After being destroyed by fire in 1414, devastated in 1595 during the war and ravaged by Tyrone's rebellion in Ulster in 1641, is surprisingly open to the public and still worth the visit. It retains a beautiful cloister with Gothic and Renaissance capitals and the only altar with a plant carved panel remaining on the island.

In Boyle, its monastery, Mainistir na Buille, was the successor of the Cistercian Mellifont, founded in 1142 ended up being used as a barracks by the Connaught Rangers until 1788 and perhaps for this reason, has come about entirely until today. In the region of the Burren, Kilfenora, the smallest parish in medieval Ireland, became the kingdom of Corcomroe diocese; attest seven crosses and effigies of clerics in the eastern wall. On the outskirts of Ennis, Fegus riverside, is Clare Abbey, Augustinian most important centre of the county where still stands two chapels, a cloister and a round tower besides other minor buildings. 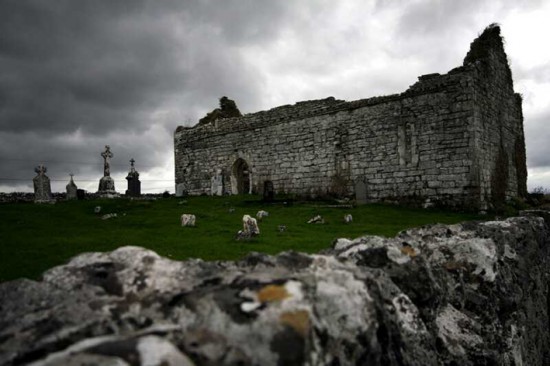 Dingle, one of the three main County Kerry peninsulas, some say the most beautiful, is rich in monastic ruins, some related to the cult of Saint Brendan, as Kilmalkedar Church, Cill Mhaoilcéadair, a nice example of Romanesque introduced from England. Keeps an ogham inscribed stone in the ancient Irish alphabet which translated reads MAILE-ÍNBIR MACI BROCANN, In the name of Mael Inbir, son of Brocan. Near the entrance a stone sundial looks skyward. Its gnomon indicates time. On the outskirts of the Ballyferriter village it’s a little bit difficult to find the remains of an ancient monastery from the sixth century. Excavated in the seventies of the twentieth century, An Riasc, meaning the swamp, is surrounded by a nearly circular wall. Within the enclosure another wall divides it into two sections, Eastwards was the oratory and a small graveyard where forty-two tombs are aligned in two rows. On the other side are clearly seen the basis of the monks living cells and towards the centre stands the cross of Reask decorated with spirals. Not far away, on a private estate, is the renowned Gallarus Oratory, Séipéilín Ghallarais, or the church in the foreigner’s site. Ship shaped inverted boat, is a very simple construction but beautiful in its stark lines. And even in the peninsula, back towards the town of Tralee, is the small, though slender, Carron Church, Teampall an Chairn, perhaps named after an ancient neighbour cairn. A defensive wall, rather low, indicates the need for protection that must have served as much of the parishes of Clare. Times were different. 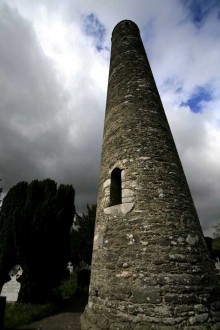 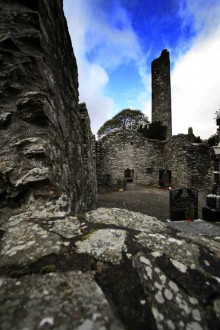