Homepage > Algeria About Gazelles and Camels

Algeria About Gazelles and Camels

Benabderramane Mahdi is tall. Very tall. He’s also very thin. And if we add a four feet long chèche, the turban kind used by touaregs, he is even taller. In his stays in Barcelona, sometimes he wandered through Gracia neighbourhood streets, looking for the same sort of tea he and his friends used to drink when they are in the desert: a Zhejiang Gunpowder green tea. He particularly loved this kind of tea. Nothing happened when he dressed a western suit with a tie. Even stylish. But he loved to dress as he was always in the desert, a blue gandhura and tunic and the four feet long chèche. He was just spectacular and he couldn’t avoid stares from other passers. Just a touareg dressed as a touareg in the city centre. 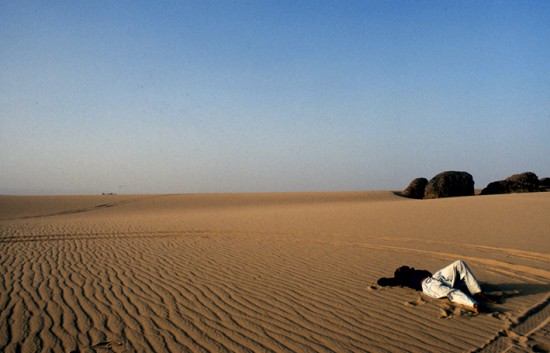 At home, my home, he kept his habitudes, about the tea, about the meals and of course about his beliefs. First thing he asked me was from where the sun arises. Prayer duties. Second one, about where to buy ingredients to cook, to disappoint me, a halal couscous. My favourite has been always haram though I do appreciate anyway how he cooked couscous. Third, boil water in the kettle to start the tea ceremony. Not in the Japanese mood, of course. The infusion is poured from one glass to another over and over again. The idea is to generate foam meanwhile tea cools. The more foam you get better and more appreciated is the tea. The whole ritual is repeated three times. So if there’s any to be rejected is preferable to be the first one, regarded as the best, so the risk of looking impolite is lesser. They say the first tea is bitter as life. It barely has sugar. Second is slightly sweeter, strong as love. In the third round they continue adding sugar, in my opinion too much, so it’s sweet as death.

Mahdi has always roamed alone in Barcelona. He never asked for a map, a guide or any indication. I guess somebody who lives between Tassili N’Ajjer and Tassili Aggahar, in a desert larger than whole Spain, don’t need it to find out any place. In fact he always came back punctually to tea time.

There, in the route between Djanet and Tamanrasset, I think I could recognize Mahdi by his demeanour, his dark moustache and his calculated gestures when handles a cigarette, even though hides his face behind the chèche. It’s a habitude maybe I have inherited. When I wear a sweater or a shirt and raise them to hide my facial expression, if I smile or I’m upset. His name, Mahdi, مَهْديّ, means, in Arabic, the guide, the one who know and shows the way. He's a good friend, generous and kind I have always appreciated even when I just began to understand him. Yet I understood him perfectly when he spoke about  gazelles.

For the, colloquially talking, world is divided in gazelles, graceful and agile, and camels, slow and clumsy. Women and men living in an arid and stark world, but under a clear sky full of stars where its dances and music take place. They write stories in the sand and there are unexpected signs on acacia tree leaves that guide my friends in the middle of nowhere.

They do not call themselves Tuareg, Targui is the singular. It’s a word, although generally accepted, relatively dismissive. They are the noble and free Imghad or Kel Tamahag people, especially in the Aggahar. Tuareg comes from the Arabic participle tarek, abandoned, due to their initial reluctance to submit to Islam. The other topic name, call them blue men due to the indigo dye in their clothes that also dyes their skin. 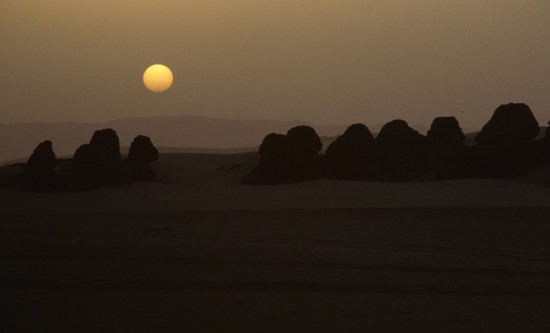 Another time, Mahdi arrived with his cousin Baly Othmani, a Targui musician. His band had to play in several concerts. At home, my home, we repeat couscous, tea ceremonies and heard a small performance from Djanet band, dedicated to not much more than a half a dozen friends.

I showed them the pictures taken in their country. They declaimed aloud every place’s name, every friend’s name, and even some stones names. Tin Tarabin, Tin Akacheker, Tagrera, El Guessour. And themselves:

Once they took me to Father Charles de Foucauld chapel, in Assekrem, north of Tamanrasset. The chapel is located close to the top of the mountain, nearly one thousand feet high. By night, despite to be in the desert, it's cold enough to need a good and thick coat. Landscape father Foucauld enjoyed it’s extraordinary. Sunrise seen from that point it’s outstanding, some said. It’s a pity it dawns so early.  But it really is: I bought a postcard in Tamanrasset. 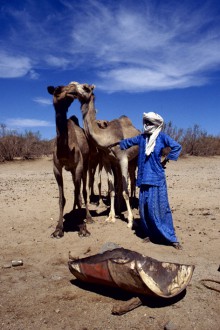 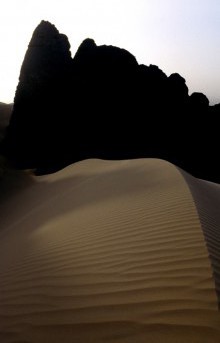