In ancient times Western world just ends where the Pillars of Hercules stood, the Gibraltar Strait. Beyond, indeed, there were more waters but to go anywhere, as was believed they were poured down into the void. That was the reason that for years, centuries, the Atlantic Ocean was known as the Tenebrous Sea.

The name would be borrowed later from the Titan Atlas, owner of the columns of Heracles or Hercules, which marked the bounds of the known world. Beyond there would be nothing but huge sea monsters that would be yet living in future fears and even on sea charts. The first expedition known was led by King Hanno, five or six centuries before our era, who sailed from Carthage with sixty ships crossing the strait to follow sailing near the African coast founding the colonies of Thymiaterion, Cariconticos, Gite, Acra, Melita and Arambis. According to some historians probably they not cross the Draa River, roughly in front of the Canary Islands. The Periplus was transcribed in the Punic language on a sandstone tablet.

Quoted by Avienus in Ora Maritima, Himilcon was another Carthaginian navigator, ventured into Western Europe coasts, probably reaching the British coast after crossing the Iberian Peninsula and France: The beasts swim wildly through all the sea and intense panic dwells in these waters because of the monsters. The Carthaginian Himilcon spoke in past times that he had contemplated and tested personally on the ocean surface.

The Greeks associated to the ocean the myth of Atlantis and the Atlanteans, the people who have mastered the known world until its collapse because of some colossal cataclysm and against those they would have faced in the war. The texts of Plato in the Timaeus and Critias Dialogues say that was one of the seven sages, Solon, whom an Egyptian priest of Sais showed the slab stones where was written the history the lost civilization. Plato placed it beyond the Pillars of Hercules: Then you could go through that sea, for it had an island in front of the mouth that you call columns of Heracles. The island was larger than Libya and Asia put together, and since it was possible for those traveling at that time access to the other islands. From them you could spend the whole continent which is just opposite and surrounded the true ocean. 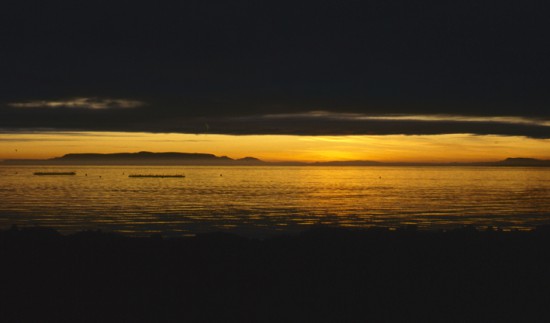 Other Greek and Roman authors, from Strabo, Posidonius and Plutarch quote the Atlantis descriptions by Plato; others understand it as an allegory. Pliny the Elder mentioned again its location in Book VI of his Naturalis Historia: in extrema Mauretania contra montem Atlantem a terra stadia VIII abesse prodidit Cernen, Nepos Cornelius ex adverso maxime Carthaginis a continente p. M, non ampliorem circuitu II. traditur et alia insula contra montem Atlantem, et ipsa Atlantis appellata. Currently we tend to believe that the legend of Atlantis may have more to do with the disaster of the volcano of Thera, Santorini, in the Aegean and the collapse of the Minoan civilization in Crete and the Cyclades.

Also Pliny, in Book II, wrote that Rome already sailed in the waters of the ocean, beyond the Strait to steer their ships to the western coasts of the Iberian peninsula, Gaul and even the British Isles: A Gadibus columnisque Herculis Hispaniae et Galliarum circuitu totus hodie navigatur occidens. septentrionalis vero oceanus maiore ex parte navigatus est, auspiciis Divi Augusti Germaniam classe circumvecta ad Cimbrorum promunturium et inde inmenso mari prospecto aut fama cognito Scythicam ad plagam et umore nimio rigentia. propter quod minime verisimile est illic maria deficere, ubi umoris vis superet.  (Today, from Cádiz and the Pillars of Hercules can navigate around the Western Ocean, around Hispania and Gaul. The North Ocean was sailed mostly under the auspices of the Emperor Augustus. A fleet skirted all coast of Germania to the promontory of the Cimbri, then saw a huge sea, or know of reports, which extends to the beaches of Scythia sea, and frozen with moisture lands. It is therefore unlikely that the sea ends where it is more humid.)

Along the Early Middle Ages the Norsemen began their incursions from the Scandinavian coast, first to the British Isles and later to Mediterranean Europe. Population pressure and in some cases political exile led to the search for new settlements even across the North Atlantic surpassing the Arctic Circle. The Íslendingasögur, the sagas of Icelanders, collected the journeys and stories that led them to discover Iceland and Greenland where they arrived to establish stable populations. The Sagas of Thornfinn Karlsefni and Snorri Þorbrandsson, or Erik the Red, describes the journeys that landed on Helluland, Markland and Vinland; Baffin Island, the peninsula of Labrador and Newfoundland respectively. In Newfoundland, in L'Anse aux Meadows, were discovered in 1960 the remains of a Viking village that may coincide with the Leifsbúðir of the sagas. 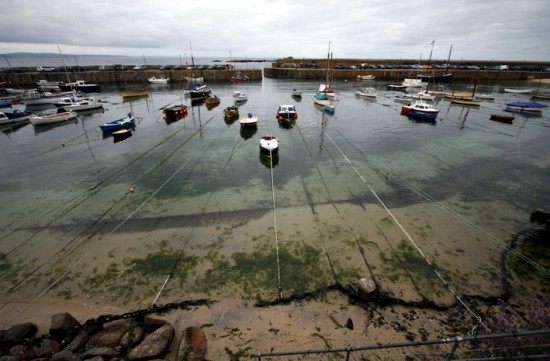 At the same time the expansion of Islam also reached the Maghreb, West Africa. For them the Tenebrous Sea was Bahar al Zulumat about which Arab historian Ibn Khaldun wrote in the fourteenth century: it’s a vast sea without limits, where the ships do not dare to leave shore because even knowing the winds, can’t know where they could lead, because there isn’t a territory inhabited further and run the risk of getting lost in the mists and darkness. In the early fifteenth century Tenebrous Sea was known up to Ras Buyadur, the Bojador Cape or Cape Fear, on the coast of Western Sahara to the height of the Canary Islands. Ocean currents and wind conditions prevented the return, fuelling the belief in the existence of those sea monsters.

In 1434 the Portuguese navigator Gil Eanes exceeded that limit by finding more favourable offshore winds that would allow Portuguese sailors bypass the African continent in the fledgling race for resources and goods from the East Indies. The search for new trade routes to break the monopoly of Venice and the Ottoman Empire in the products of oriental origin unleashed a fierce competition between the fleets of the Iberian Peninsula. The Portuguese Prince Henry the Navigator boosted exploration trips creating what would be known as the School of Sagres, where he reunited cartographers, ship owners and seafarers interested in the technological advances of the navigation of the time. The results were clear: in 1418 João Gonçalves Zarco discovered Porto Santo, since 1425 the archipelago of Madeira was colonized and the Azores were, discovered in 1427by Diogo de Silves. Another Diogo, Diogo Gomes, reach the islands of Cape Verde in 1460. During the same period the crown of Castile was busy in the conquest of the Canary Islands. The struggle between the two kingdoms tried to be regulated by the Treaty of Tordesillas in June 1494 outlining future areas of influence of both kingdoms.

Two years before, Christopher Columbus had reached the other end of Ocean discovering to Western civilization a new world and different cultures. It was the starting point of incessant journeys of exploration and conquest of the European powers. Years in which Tenebrous Sea become more and more familiar and where new data on each trip added details to cartography and portolan charts. As early as 1375, in the Catalan Atlas attributed the Majorcan Jew Cresques Abraham, the Canary Islands appear with their actual names. Was also the first map to feature a compass rose. The map of the Cantabrian Juan de la Cosa, 1500, shows the oldest representation of the coast of the American continent and includes information of the arrival of Vasco de Gama to India two years before. In 1502 Cantino’s planisphere marks the meridian designated by the Treaty of Tordesillas. The controversial map of the Turkish admiral Piri Reis reproduces part of the costs of the new world, supposedly dates back to 1513 although it is assumed that employed older sources and that fact arises the controversy. The original map is preserved in the Topkapi Saray Museum in Istanbul.

In some cases are also mapped legendary islands. The islands of Antilia, Brazil and Saint Brandan were myths sometimes linked with Atlantis or communities formed by ancient monks. The island of Antilia appears on the map of Andrea Blanco in 1448. Also appears in 1455 Bartolomeo Pareto’s; in 1507 in the Universator Orbis Tabula Cognitio by the Flemish cartographer Johannes Ruysch, and in the map of Toscanelli, 1468. Antilia and Brazil would end up giving name to some of the newly discovered lands. About Saint Brandan expeditions were organized to locate it even well into the eighteenth century.

Before the arrival of Europeans, on the other side of the ocean, curiously Mesoamerican cultures had names and words with the atl syllable. Precisely it means water in Nahuatl language. 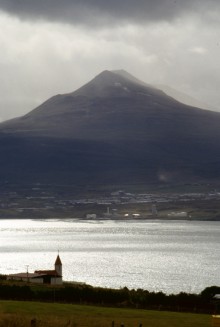 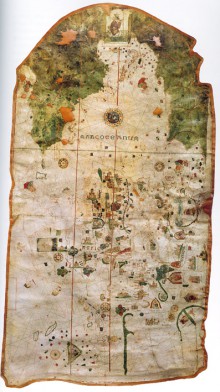