Homepage > Beaumaris, by the window

Beaumaris, by the window

Beaumaris is a pretty little town that straddles one end of the Menai Strait. It separates the island of Anglesey from the rest of Wales. Cute and tiny Beaumaris. When the good weather starts, and that in Wales means that it doesn't rain at the same time as it's windy, the place fills up with a floating population. Vacationers who walk the streets, visit the castle or climb the big wheel that is next to the sea. They flock to the bars and fill the restaurants at hours that seem untimely to us because of their early hours. At five in the afternoon, I don't know if they have just eaten or if they are already having dinner. I confess they disorient me. 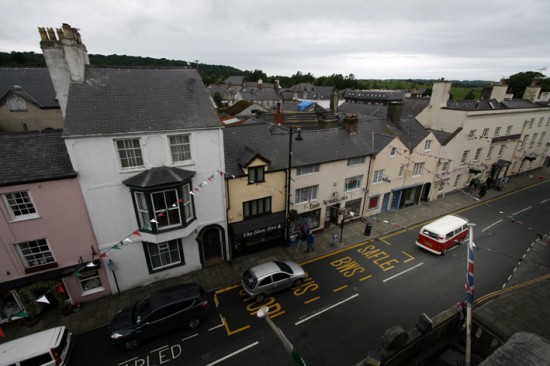 Going down to breakfast we have a full English breakfast, something unoriginal that advances to the imagination what you will find on the plate: two slices of lean bacon next to a fried egg, half a poached tomato, a small handful of sautéed mushrooms, two uncertain sausages and another handful of canned beans with sweet tomato. The whole set accompanied by an excessive half slice of bread fried in abundant butter. A heartfelt tribute to cholesterol.

Returning to the room I went to the window and looked out at the street. A white building with a certain Tudor air stood next to a shoe store. The horizontal signage of the bus stop and the parking spaces for the disabled, the banners with the green and white colours of Wales on the street next to a solitary Union Jack. A Volkswagen station wagon from the hippie days rolls toward the end of Castle Street. Clouds in the background and over the houses announce a monotonous and repetitive weather forecast. I was trying to avoid an absence so present that it completely occupied the landscape looking through the window. Again, I looked out the window. This time it didn't go through. The stare didn’t cross the glass.

Saturday gave way and ended up becoming Sunday. It was not a spontaneous mutation but rigorously tested and timed. I had slept, but I had nothing on my mind other than a disappearance. It wasn't real, but the window glass stubbornly returned other arguments closer to reality. From time to time it became transparent and allowed to see the windows of the buildings opposite and the sign of one of the stores: The Wishing Well, the well of desires, with a telephone and the name of the owner. For a while I thought about calling and making my wish, just one.

And Sunday gave way to Monday, metamorphosing as winter does into spring, as autumn does into winter. It's one more day. But different. More stubborn than fate, I insisted on my reality, on the absence of absences. But reality is sometimes cruel, even insistently absent.

Again, in front of the window, another window, this time the rain did not let transcend the vision of the fields that I had in front of my eyes. It violently crashed against the glass, distorting the vision, weaving a deformed and almost psychedelic landscape. The drops moved in s's like a river meandering on a gently sloping ground. Like the tears of an absence still unknown. There were words to invent, times to share. Against the window, the rain pattered rhythmically. It sounded like music and reminded me of a Simon & Garfunkel ballad from the sixties, in which rain falling like a memory is mixed with doubts and premature nostalgia. “I hear the drizzle of the rain / Like a memory it falls (…) My mind's distracted and diffused / My thoughts are many miles away / They lie with you when you're asleep (…) I don't know why I spend my time / Writing songs I can't believe / With words that tear and strain to rhyme”.