The city joined intermittently to the trade federation known as Hanseatic League, from its harbour sailed thousands of migrants bound for the new world and there came to shelter the famous musicians heroes of Brothers Grimm tale. Today, not far to being a city-state, is along its port, Federal Republic of Germany smallest Länder. 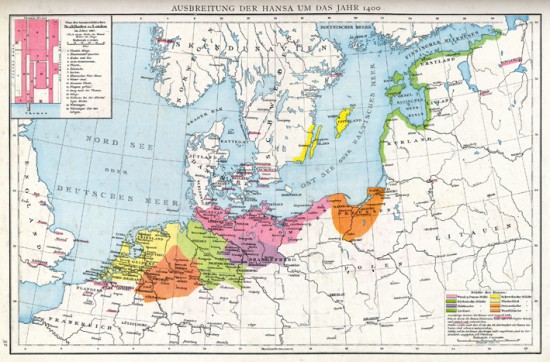 The Hansa was a federation of cities with economic interests that extended their rule by the North Sea and Baltic Sea trade routes roaming the cold waters off the coast from London to Novgorod. Bremen, fluvial port on Weser River, allied three times, between the thirteenth and sixteenth centuries, with other main north European cities. In 1827, about 38 miles to the north, would be founded a new harbour, Bremerhaven, which today, with the city, forms the Estate of Bremen inhabited by more than six hundred thousand people. From there, between 1832 and 1960 more than seven million people left for America.

The city enjoyed prosperity through trade during the years of the Hanseatic League contributing to the creation of landmark buildings concentrated around the market square, Marktplatz, and inside the perimeter of the ancient walls which today, on a map, its layout landscaped in Am Wall is noticed, there where the last windmill of the city still stands on the Grießhaus bastion. In Markplatz there’s the City Hall, a superb gothic building built between 1405 and 1410. On the facades, eight monumental figures represent the emperor and his seven archdukes, electors of the Imperial Free City and some prophets. Just in front stands the statue of Roland, the medieval hero. Sculpted while the council rose it symbolizes justice and freedom. In its shield can be read the motto of the city:  Vryheit do ik iu openbar / De Karl und menich vorst vorwar / Desser stede ghegheven hat / Des danket gode is min radt. (Freedom I reveal to you / That Charlemagne and many a prince, it’s true / Have given to this place. / Thank God for it, is my advice.) 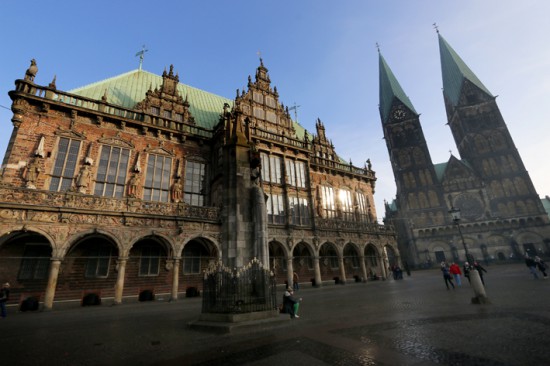 In the same square are the Schütting, Chamber of Commerce headquarters built in 1537 by Antwerp master Johann Buschener, with its baroque facade richly decorated with golden filigree, the pharmacy council, and the modern building of the Land Parliament, the Haus des Bürgerschaft built in 1960 by Wassili Luckhardt, heavily contrasting with its medieval surroundings. At each side of the City Hall there’s a temple. To the right is St Pietri Dom, the Cathedral, with its two tall and robust steeples with blind windows consecrated for the first time in 789 by the bishop Willehad. The cathedral has two crypts, in the eastern one there are Romanesque capitals of the columns and on the west there is a thirteenth-century baptismal font made entirely of bronze resting on four lions ride by human figures. A small museum keeps historic objects of the temple, from a stone sarcophagus, statues, until chasubles and written documents.

On the left there’s Gemeinde Unser Lieben Frauen Kirche, the Church of Our Lady, the oldest in Bremen, crowned by an elongated, slender spire.

Near the corner from the City Hall and Our Lady, there’s a sculpture designed in 1953 by Gerhard Marcks, where a cock is mounted on top of a cat riding on a dog riding on a donkey. It recalls the Grimm Brothers story of Die Bremer Stadtmusikanten, the Bremen Town Musicians. It is said that to touch the front legs ass brings lucky, that's why they are worn, but should be done with both hands simultaneously, otherwise, just touching only one, looks like two donkeys shaking hands.

From the square towards the river is worth to take Böttcherstraße, an alley that linked the market with the river port facility. Its name recalls coopers who worked in it. There are some medieval houses along the street, although it was renovated in the early twentieth century as an original group of German Expressionist brick architecture designed by Bernhard Hoetger and commissioned by Ludwig Roselius. The latter was the inventor of decaffeinated coffee and founder of a coffee trade company. He acquired many of the street buildings. At number 6, a Renaissance 1588 mansion was arranged as a bourgeois home from that time showing a sample of decorative arts, Renaissance and baroque furniture and paintings by Ludger tom Ring and Lucas Cranach the Elder. It also displays the silver treasure of the Company of the Black Heads of Riga, brotherhood of soldiers and traders. This is the Ludwig Roselius Museum and next to this is that of the painter Paula Modersohn-Becker, whom Roselius had acquired many paintings representing a broad sample of artist trajectory. At Böttcherstraße entrance there’s a large gold relief by Hoetger which paid tribute to Adolf Hitler as Der Lichtbringer, the one who brought light. But the dictator considered expressionism as Weimar Republic period degenerate art example. In the same alley is the thirty Meissen porcelain bells carillon on neo Renaissance Haus des Glockenspiel along Atlantis and Robinson Crusoe buildings.

There are more art galleries in the city, following Am Wall eastwards, just on the downtown bounds, is the Kuntshalle, a neoclassical palace that houses collections of European art from the Renaissance to the present. There are Cezanne and Monet paintings and other by Max Liebermann, Lovis Corinth and Paula Mendersohn-Becker. In the middle of the river Weserburg Castle was actually a tobacco factory and later a coffee roaster warehouse until, in 1991, was transformed into the Museum of Modern Art. 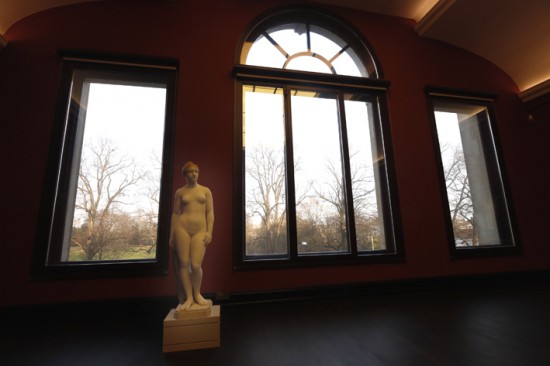 On the Weser shore, the Schlachte promenade gathers bars and terraces that lean out to the river in summertime. Not far away is the network of small streets and low houses that retain a certain medieval air, is the Schnoor quarter, where goldsmiths workshops and craft alternates with coffee shops and restaurants. Schnoor comes to mean rope and the reason is none other than the fact that here ropes and cables for shipping companies were made. Schnoor was one of the poorest city districts, while wealthy merchants settled in Obernstraße and Langenstraße fishermen and rope-workers lived here. It was one of the few areas of the city that emerged relatively unscathed from the Allied bombing raids during World War II. There are still some notable houses as the Concordenhaus or Schiffer Haus, the latter built in 1630 on Stavendamm street was trading and marine products storage. Opposite is a statue made by Jürgen Cominotto which reminds the public baths that once existed in the place. At Lange Wieren, almost at the entrance to the neighbourhood, near the ancient abbey of St Johann, there’s a restaurant open daily, the Gasthof Kaiser Friedrich, its name recalls the Emperor Frederick III, who ruled only one hundred days, from March 9 to June 15, 1888.

In just fourteen years she completed about seven hundred and fifty paintings and more than a thousand drawings. German painter production was no more prolific because her life ended prematurely caused by a pulmonary obstruction on November 21, 1907, when she was thirty-one years old, few days after gave birth to her daughter. Born in Dresden in 1876 she moved to Bremen with her parents being still a child. She studied fine art in London and Berlin. In 1898 she was related to the artist community installed in Worpswede, about fifteen miles away from Bremen. In Paris she met the work of Paul Gauguin and Cézanne which influence her style, a singular expressionism. Once back to Worpswede she married with the painter Otto Modersohn and befriended the sculptor Clara Westhoff and the writer Rainer Maria Rilke. Modersohn painted a poet’s portrait. He, in turn, immortalized the atmosphere of the group of artists in the book Worpswede published in 1902: “And there they were, with the young people who had come to find theirselves, the many enigmas of this land. Birches, quagmire huts, heath land, humans, evenings and days, of which no two are alike each other, and where there is not even two hours that may be mistaken. And then they got to love these puzzles."

Bremen enabled a building, the Böttcherstraße, to house a wide sample of the different periods of the artist's work. It’s a German Expressionism architecture unique building designed by Bernhard Hoetgers inaugurated in 1927. The Art Gallery Kuntshalle exhibits 36 additional works made between 1898 and 1905. They are near the central hall dedicated to the German Impressionists founders of Worpswede: Otto Modersohn, Fritz Mackensen, Johann Heinrich Vogeler and Hams am Ende.

After her death, Rilke would dedicate her a long poem, Requiem für eine Freundin:

(…Come; and we will be silent for a while. Look at the rose on the corner of my desk: isn’t the light around it just as timid as the light on you? It too should not be here…)