Children laughs flood the deck at the stern side of the ferry. Others, teenagers, are feeding gulls throwing bread crumbs to the air. Seagulls skilfully trap it. Devoid of enthusiasm a waiter walks the aisle between the seats, carrying a hot teapot and a huge tray of sugary donuts. Other passengers sink their glances into Adalar Hümiyet local news pages. In the cabin, an outspoken salesman, too well dressed for the place, screams to an audience too sceptical the wonderful properties of a multi screwdriver provided with a flashlight. He sells also a retractable walking stick that fits in any pocket. Surprisingly, after a few minutes of incessant chatter, many passengers have bought any device. 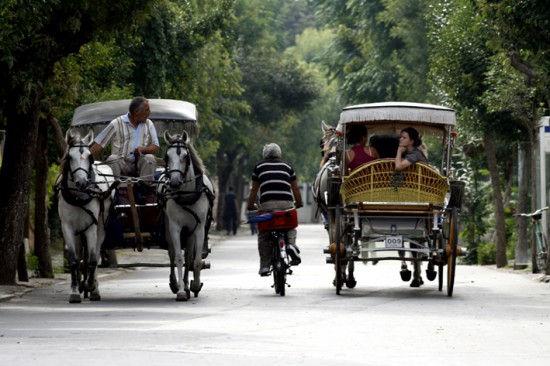 Beyond the starboard rail and after crossing the Golden Horn, slowly scrolls Sultahamet, Hagia Sophia and the old city of Istanbul skylines. Asian neighbourhoods buildings appear closer to the harbour: Üsküdar, the ancient Greek Chrysopolis, Scutari to the Genoese in the Middle Ages and Kadikoy, once called Chalcedon.

Afore the Sea of ​​Marmara. Soon appears the profile of some islands. Are Kizi Adalar, the Red Islands, a small archipelago barely twenty kilometres far from the city centre. Local people refer to them simply as Adalar: the islands. And Büyükada, the largest, literally means Big Island. 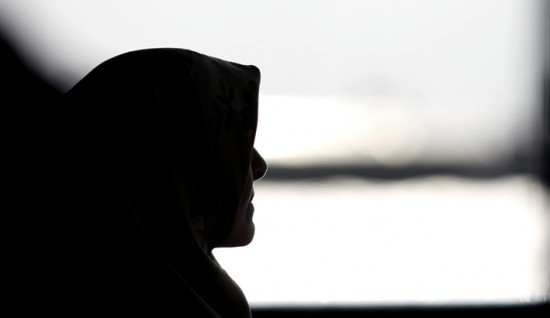 Before weekenders and tourists avalanches, the islands were inhabited by fishermen and Greek monks. Princes also arrive, and this is the other name by which is named the archipelago. They arrived in exile, wise enough to keep his head on his shoulders during succession disputes in the Byzantine court  and other palatial conspiracies from the Topkapi halls. Leon Trotsky was another celebrity here in exile. He spent four years between 1929 and 1933, in the Izzet Pasha palace in Büyükada.

Büyükada was conquered for the Turks by Admiral Baltaoğlu Süleyman Bey. In the early nineteenth century, during the reign of Sultan Abdulhamid II, ministers and military began building Yalis, beautiful wooden mansions, besides the Bosphorus sea shores. They were followed by Jews and Armenians wealthy merchants from Pera district, also predisposed to enjoy a milder temperature. These Yalis, preserved from the Belle Epoque days, give island settlements an absolutely air from nineteenth century.

Ferries leave Pier Kabataç to stop in each island. First reach Kinaliada, Turkish Naval Academy headquarters. Then proceeds to Burgaz and Heybeliada, another popular destination during for the summer barbeques and weekends picnics, before arriving to Büyükada,  the largest one. 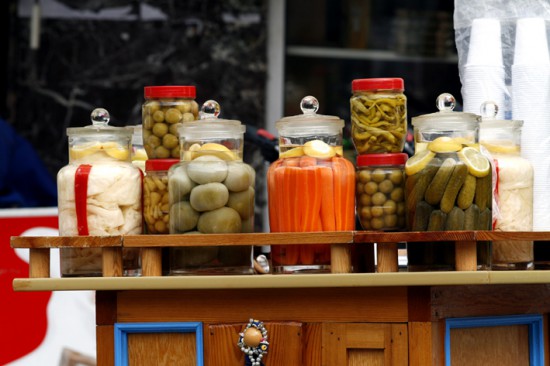 A string of Fayton, horse-drawn carriages, waits near the pier. There are no motorized vehicles on the islands, except for some municipality services. This turns the constant traffic jam into a surprising quietness; an unusual feeling  in the metropolis. Sometimes, casual looks, barely with any time to any complicity, are crossed along the rides between passengers.

Less than a hundred yards from the pier, a magnificent Ottoman-style building, is located Iskele Meydani, Church Square. Obviously there is a small Orthodox church, Rum Panaiye Kilisesi, a couple of hotels, and several small restaurants that extend their tables on sidewalks under the smell of kebabs species. Also multicoloured pickles, peppers, carrots, olives, are offered by merchants in their street stalls. The covered clock tower in the centre of the square tries to remind passersby over time. Nobody cares.