With the skill provided by boredom and the constant repetition of the same movements, the lady at the counter wields the short-handled knife with protection and a blunt edge. With an automatic gesture, almost involuntary, looking to separate the rib between the union of the shells, with a quick and accurate turnaround, the oyster opens quick and easily. What for a common mortal is heroic or a deep cut on one hand, to the lady at the counter is a trifle, a routine, one more open oyster. 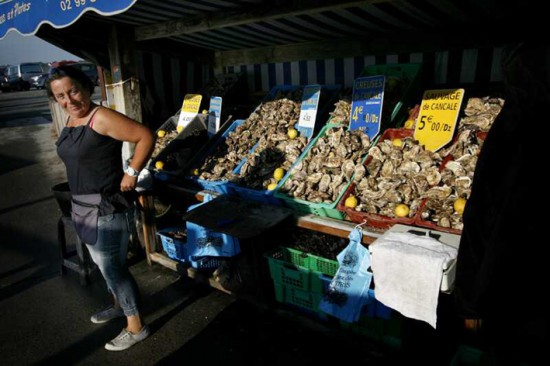 The seabed in Cancale, a small Brittany town amidst Saint Malo and the Mont Saint Michel, between the cliffs and the port is made of oyster shell debris accumulated over the years but not through the centuries. Besides Atlantic town of Arcachon and the Mediterranean Bouzigues Cancale is one of the three holy cities for bivalve lovers and has become the second French town exporting seafood to Europe.

Until the mid-eighteenth century, fishermen from the town and from neighbouring Normandy and even British coastal towns tirelessly collected oysters in Cancale bay. There were complaints from French traders against neighbour’s raids across the Channel. On July 12, 1721 was published in the French Admiralty registries the advisability of seafood trade regulation: le Conseil a estimé qu’il convenait de faire un règlement portant que les maîtres de barques, soit français, ou étrangers, les premieres enregistrés seraient les premiers expédies. (The Council believed that it would be desirable to develop a regulation by which shipowners, whether French or foreign, are treated according to their arrival order). 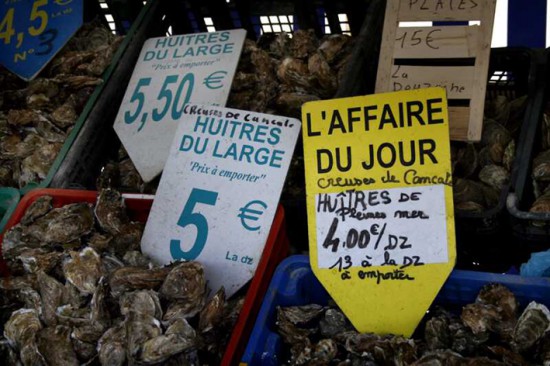 Shortly before mid-century overfishing affected the business. More than twenty thousand tons of wild oysters were removed yearly. Gathering had to be restricted and the days when was allowed, massive fishing outings were organized. The caravane met about two hundreds of boats. Bisquines, canots and sloops covered the bay waters. Sails in the wind they throw, one after another, their water dredges.

A 1759 edict banned the capture and sale of oysters from the first of April until the last day of October. Hence, there were no oysters in the months without "R". Already in the nineteenth century Napoleon III authorized the importation of foreign molluscs, primarily Portuguese and Japanese, to replace the ailing Bretons farms and to prevent the collapse of shellfish harvesting.

In 1858 the commissioner of the navy, monsieur Bon, successfully managed to capture oyster larvae on wood or metal plates in the sea. Improved in Cancale this technique would be the start of the oyster farming in the country and would be generalized across France from the third decade of the twentieth century. 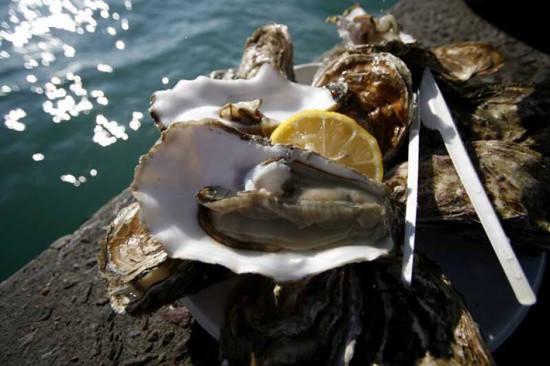 Small oysters, one to two inches, are fixed on different supports, are tiles or other shells. Nine months later they are planted in hatcheries where they will grow over three to four years. Finally selected are washed repeatedly, calibrated and then deposited in ponds where the water is frequently changed applying a technique called trompage, which kept oysters closed retaining salt water therein.

Cancale Bay, near Mont Saint Michel, is subject to the strongest tides in the world. They could reach even forty five feet high. These oxygenate and bring to the oyster plankton need for food.

Ostrea edulis is the scientific name for the native flat oyster, which in its larger variety is called pied de cheval, horse foot The latter weighs ten ounces on average and can reach three pounds and a half. But just as in the rest of France, the native only represents a small percentage, around 2% of total production, which reaches about 30,000 tons in northern Brittany and 130,000 tons nationwide, world's second largest producer after China. The most common variety is Crassotrea Gigas, hollow or Japanese oyster which is legally classified according to their calibre. For example an oyster creuse #5 weights between one and one and a half ounces while the gauge #1 weighs between four and five thirty ounces. A 33 pounds pack of #5 may contain some 360 ​​oysters while in the package #1 will number 108.

They are also classified according to the tune in the final stage of growing up: a fine claire will have cleaned for at least one month in a pond a density not exceeding twenty oysters per square meter. A spéciale de claire will have done for two months at a density of 10 oysters per square meter. For native flat oysters the size is based on the weight mentioned for a hundred pieces. Thus in the calibre #3, for example, one hundred units must weighs eleven pounds. Nor missing organoleptic descriptions: the nutty taste that characterizes plate belon, iodine in Tsarskaya or sweetness in Spéciale de Saint Keber.

Could not miss in Cancale a museum dedicated to the oysters and its world, easily unique. Besides oysters exhibits an immense collection of over two thousand shells of different species from all corners, having water, in the world. 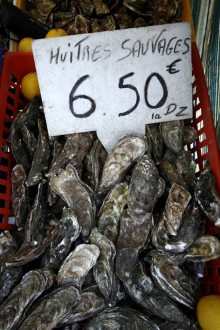 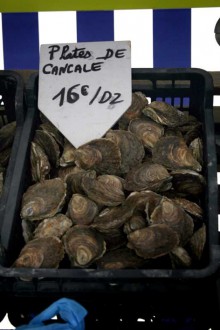