Simon & Garfunkel sang in 1966 a ballad titled A Simple Desultory Philippic. One of the verses said He’s so unhip, that when you say Dylan, he thinks you’re talking about Dylan Thomas, whoever he was. The man ain’t got no culture.

The first Dylan is Bob Dylan, or Robert Allen Zimmerman in its original version. Although he refused it’s said he changed his name by the admiration caused him the second Dylan, the Welsh poet Dylan Thomas. Dylan, Bob and Thomas, Dylan appeared both on the album cover of The Beatles' Sergeant Pepper's Lonely Hearts Club Band. They say it was Lennon who suggested that Dylan, Thomas, was included as one in the myriad of characters. And there is, in a discrete second row, to the left. 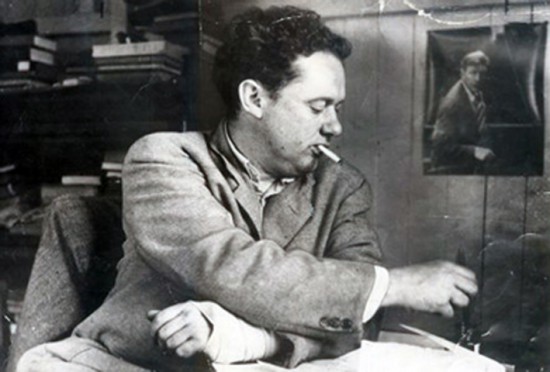 Thomas, Dylan, is now less popular than Dylan, Bob, but he was a key figure in twentieth-century Welsh poetry. Born in Swansea in 1914 and died prematurely in New York at the age of 39 years. He was also premature as poet at age eleven in his school where he wrote his first verses in The Song of the Mischievous Dog. At nineteen published for the first time in the London New English Weekly, And Death Shall have no Dominion. One year later, at twenty years old, he published his first book 18 Poems. Thomas wrote prose. Short tales. Basically the selection Portrait of the Artist as a Young Dog parodying the title of Joyce's work, or the funny Adventures in the Skin Trade, an autobiographical novel piece, where the protagonist spends the whole story handling a bottle stuck in his little finger. Also covered, with even greater dedication, scripts for film and radio. One of the latter, Under the Milk Wood, is one of his most famous works. In 1938 he first moved to Laugharne, west of Swansea, with his wife Caitlin Macnamara. They married one year earlier in Penzance, Cornwall. After some moving they permanently settled in the Boathouse, the house that faces the Taf estuary. He lived there with his family, the last four years of his life. Laugharne inspired Llareggub in his scripts, and also briefly described it in Quite Early One Morning: And some, like myself, just came, one day, for the day, and never left; got off the bus, and forgot to get on again.

In 1950 began its incursions into the United States where he went to recite poetry and radio scripts, particularly Under the Milk Wood and participate in literary conferences. It was in his last visit to New York when he entered the hospital emergency Saint Vincent, where he would not emerge alive. His body would be repatriated for burial in Laugharne. A year earlier he had published his Collected Poems 1934-1952.

The core of the Thomas poetry is not too extensive. Is contained in a volume of less than two hundred pages comprising a hundred poems. His poetry is musical. Sound and built on images. He stated once that: A poem of mine requires a multitude of images... all image sequence must be a sequence of creations, recreations, destruction and contradictions... and the inevitable conflict of images... I try to create that moment of peace that is a poem. Also has been alluded his Gaelic quoting the composition Do not go gentle into that good night, but despite Celtic and literary tradition of his land, Thomas did not read Welsh but used it in personal and place names.

The tour following his footsteps, literary, alcoholic, lively ... starts in Swansea, the Welsh city, that even has undergone changes also are spaces Thomas eyes screened. At number 5 of Cwmdonkin Drive in the Uplands neighbourhood, he came into this world. There, in a small engraved plate are the last lines of his work Fern Hill: Oh as I was young and easy in the mercy of his means / Time held me green and dying/ Though I sang in my chains like the sea.

Perhaps the most appropriate place is the old town hall, now converted into the Dylan Thomas Centre, where permanent exhibitions shows the work and scenes of the poet's life, few steps away Morgans Hotel, in Adelaide Street, and from the offices of South Wales Evening Post, where Thomas began working as a reporter in 1931. Then the newspaper was on Castle Street. The writer has his own place by the harbour, the Dylan Thomas Square, where a statue of him is almost face to face with Captain Cat’s, one of the main characters in Under the Milk Wood, turning their blind eyes to the waters that once, when his eyes were still bright blue, sailed. The writer's own statue overlooks the water, seems interested in some undefined object. Seems to think about something... on tumbling hills admiring the Sea.

Behind him, on the square, an old building is now the Dylan Thomas Theatre. Here the writer was once part of the cast of the Swansea Little Theatre rehearsals and in some of its performances. His figure is now present on a wall painting.

Thomas described Wind street as a museum which should remain in a museum. Formerly it was the commercial downtown and was one of the few areas of the city that escaped the bombing of 1941, during World War II. Here Thomas had some of their favourite pubs.

The Strand, was before the river was diverted, an active waterfront that appear on some of the Portrait of the Artist as a Young Dog tales. Beyond there’s the only remaining cobblestone street in Swansea, Green Dragon Lane, which links back to Wind Street. Near is Salobrious Passage, a dark alley that connects with Princess. It appears In the only ghost story he wrote, The Followers, where it’s transmuted as Paradise Passage. In the corner, at 56 Wind, is the oldest pub in the city, the No Sign Bar, where Thomas often came to quench their thirst. In Singleton Street, are the Singleton Hotel, where the writer used to come to eat, and the city’s Grand Theatre.

Leaving Swansea, Abertawe in Welsh, the road leads to other landscapes in different stages of the writer's life. The Llangain of their ancestors, the Carmarthen often visited during his youth, up to Laugharne, the small village of Taf estuary.

Laugharne seemed on his first visit, in 1934, the weirdest Wales town. In May of that year wrote his impressions to Pamela Hansford Johnson: is the strangest town in Wales. Laugharne, with its four hundred inhabitants has a castle, a town hall and a judge of port. People talk with a strong English accent despite being surrounded by hundreds of miles of Welsh land. The neutral sea is at the foot of the village and Richard Hughes writes his cosmopolitan stories in the castle.

But here he would stay, at least he used Browns Hotel pub phone as his own. Today her image is part of the sign at the entrance: Browns Hotel Free House. Opposite the medieval fortress there’s now installed a wooden bust of him. Here still spend hours watching as time goes by and tides, immovable as the castle. Visitors choose between taking Dylan's Birthday Walk, or the path leading to the Boathouse, where he would spend with his family, the last years of his life, between 1949 and 1953. His final resting place was this delicious riverside house, now converted into a house museum dedicated to him.

There’s a nice walk along the bay’s shore to get to it. It’s isolated from Laugharne and from the rest of the world. At low tide the marsh receives indifferent the incessant impact of the raindrops. A long curve that claims to be the horizon blurred parallels the coastline. In between ascending and descending water in an endless eternal cycle. The Boathouse lounge is a perfect watching point for this particular state of affairs. Here are preserved the furniture and other objects that share this space with Thomas.

The Boathouse was ceded and conditioned to live in by his friend Margaret Taylor, in 1949 Thomas sent a letter telling her about the house: I know that the only way to thank your great gratitude is to be happy and write. And here I am, happy writing. Anything I shall write from this wooden loft , each of the words I’ll write will be my way of saying thank you.

Before arriving is cornered at a small roadside the shed that sheltered writer's inspiration. Here he stayed moving the texts from their imagination onto the paper. His stuff still looks like be expecting his imminent return. The notes on the table and crumpled on the carpet. The jacket hung on the back of the chair, the portraits attached  with pushpins to the window and the light itself, becoming dense and taking volume to cross the window. The stove is ready to be turned on and a cup of tea is waiting beside the crystal pot to keep pencils and pens. It seems he just come out to look for cigarettes.

After the river and beyond the horizon are Blaen Cwm, Llansteffan and Fern Hill, scenes from his childhood and background of the first story of the Portrait: The Peaches. Faraway are the Gower Peninsula and Worms Head, scenes of his poems.

After his death, Dylan Thomas remains still there, buried beside his wife in the small graveyard in the Church of Saint Martin. A simple wooden cross marks his grave. 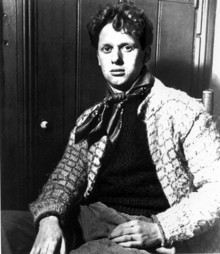 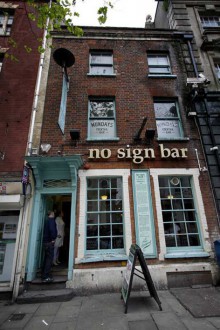