The accumulation of sediments carried by Ebro River over the centuries has created this great changing space of more than three hundred square kilometres, which, in its wetlands, hosts an abundant wildlife protected by the Natural Park and an agriculture characterized by the rice crops. 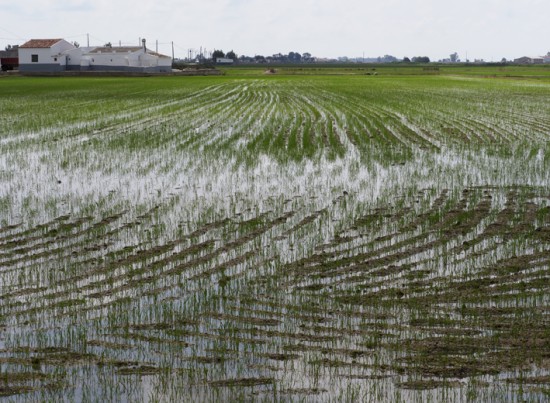 Delta’s geography, both physical and human, has changed throughout history. The first one did it by the progression and settlement of the sediments that have formed the great wedge protruding thirteen miles deep into the sea. It has not always had the same shape neither the river emptied its waters in the same spot, some of the lagoons that have been enclosed were once old mouths, just as the current tips of the prolongations of the Fangar and the Trabucador will one day end up joining the coast forming new lagoons. October 1937 flood diverted northwards the mouth course, blinding the channel outflow now known as the Riu Vell – Old River - or Gola de Llevant towards Galatxo de Sorrapa where it drains today, with the exception of large avenues when both mouths are active again.

The blockade of the current had also consequences, first in Muslim times with the construction of the weir between Xerta and Tivenys towns to derive the water towards irrigation ditches and more recently with the construction of large dams to maximize the water resources. The first consequence was that the river ceased to be fully navigable whose farthest port was, long ago, Roman Varea, at the outskirts of current city of Logroño.

The biggest lagoons that have formed are those of the Encanyissada and the Tancada - meaning the one full of canes and the closed one -, in the southern half of the delta and that of the Olles Canal Vell, Garxal in the northern and Calaix Gran and Calaix de la Mar in Buda’s Island. All of them belong to Natural Park protected area since 1983. Encanyissada lagoon is the largest in delta and its name comes from the reeds that surround it, practically on the shore is Casa de Fusta – the wooden house -, built in 1926 to house a hunting society, in 1986 it started to be managed by the Natural Park and currently houses an information centre. Immediately to the east is Tancada lagoon, with salt ponds and fish farms. Bassa de les Olles, located near the town of L'Ampolla, is one of the smaller lagoons. It occupies about 54 hectares and the depth barely reaches five feet. Here you can see flamingos, collared pratincoles, gull-billed terns, common kingfishers, mallards and also squacco herons, cattle egrets and cormorants.  In all of them, throughout the delta, up to 360 different species of birds can be seen along the year.

There are also three islands, the one of Gracia that split the river flow into two branches for half a mile, between Sant Jaume d'Enveja and Deltebre, where citrus fruits are basically grown and that of Sant Antoni and that of Buda at the end of the mouth. The latter separate the two arms of the stream in the Goles de l’Ebre. Near the mouth, almost next to the Garxal lighthouse, basically a beacon supported by a painted column in a dazzling yellow colour reflected in the reeds stagnant waters, there is a wooden lookout ziggurat shaped. From the top can be seen the fork formed by the river before reaching the sea. In flooding days, when the channel drains those waters poured by the last winter storms and begins the thaw that feeds it, even in spite of the regulation exerted by the dams, the waters overflows some points and the boats must reduce their activity. The river breaks the blind section that separates Sant Antoni Island and the second mouth is reborn in Gola de Tramuntana. In Buda Island there was, between November 1864 and Christmas of 1961 a metallic structure lighthouse that had about 150 feet high. Its signal was visible twenty miles away. The regression of the terrain and the storms caused the fall of the lighthouse. Until the decade of the fifties the island came to have about two hundred inhabitants who were basically engaged in the rice crop, there is a farmhouse from the late nineteenth century with an attached chapel. Until then, they still celebrated a major festival and even had a local soccer team. 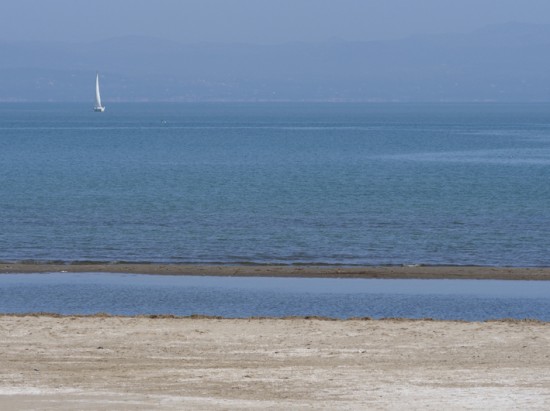 Delta’s physical geography is also characterized by the two elongations of land that recede towards the coast, Punta del Fangar and Punta de la Banya. The first form the homonymous bay at the beginning of which is the beach town of La Ampolla, in 1972 a 72 feet high lighthouse was installed replacing an older one, built up in 1864 and, later transformed into just an iron tower. Dunes are formed along the sand arm and there breed diverse seabirds species. Punta de la Banya, where the Salinas de la Trinitat are located, is linked to the rest of the delta by a narrow and long isthmus of sand known as the Trabucador which has a beach on each side barely separated by one hundred yards. La Banya closes Alfacs bay where the town of Sant Carles de la Ràpita is renowned for its prawns

Human geography has been modified in function of the change of uses of the land, mainly in the last two centuries, passing from a scarce and random agriculture and the exploitation of the saline, to overturn, after the opening of the water channels, practically in the rice monoculture, which currently covers an area of ​​more than twenty thousand hectares where about 45 thousand tons are collected each year. The rice attracted people, some fifty thousand inhabit the Delta today. They have concentrated and made grown towns that before were only villages or scattered farmhouses. The most obvious case is that of Deltebre, whose municipality covers nowadays almost the entire northern margin of the delta. Deltebre was created from the merger of the nuclei of Jesus I Maria with that of La Cava, which previously, in 1977, had been segregated from Tortosa. Right on the opposite bank of the river, Deltebre is reflected in Sant Jaume d'Enveja municipality, whose name comes from Arabic Ibn Bajá. There are still five more towns at the end of the delta, these are the two modern urbanizations of Riumar and Els Eucaliptes, both along the coastline and those of Muntells and Balada. Els Muntells was created in 1860, when rice began to be cultivated and huts and barracks were aligned along the current main street. Balada, next to the island of Gracia, has about a dozen inhabitants registered. The fifth is Poblenou del Delta, an agricultural town built by the former National Institute of Colonization in 1956, at the time of the dictatorship, hence the first name of the town: Villafranco del Delta, a name it kept until 2003.

Both banks of the river were united in September 2010 by the Passador, the modern bridge that definitively lifted the use of barges to cross the river and that has inherited the name of the boatmen who made the crossing. The alternative, at this point, was to drive about sixteen miles to cross the riverbed by the next bridge, that of Amposta.

The communications, formerly, passed through the river, basically along the river, where the steamboat Anita reigned from 1915, until in 1927 the railway line between Tortosa and La Cava, popularly known as lo Carrilet de la Cava, was inaugurated. The seventeen miles line had its heydays throughout the 30s, transporting passengers and rice, a lot of rice, until in the 50s the boom of road transport began its decline, lo Carrilet completed his last journey in Tortosa on December 31, 1967. The steam Anita was sunk forever next to the island of Gracia on October 28, 1937.

A line of fortifications crossed the coast and the limits of the delta, some date from medieval times, others were part or were reused for the optical telegraph during the Carlist wars. In San Carles de la Rápita there are four of them, Moro, Torre de Martines, Capadello and Guardiola; between these and Amposta are the Forxeron, Poquesalses and Oriola. On the left bank still stand those of Burjassénia and Oriola. The one of Burjassénia was acquired, along with the neighbouring lands, at the beginning of the 13th century by the Templars until it passed into the hands of the Hospitalers when the Order of the Temple was forbidden. Between Amposta and Tortosa, one on each bank, the towers of Font de Quint and Carrova controlled the passage of navigation, it was said that both could close the way through a large iron chain. In the outskirts of La Aldea there is, facing one another, a tower and  the Santa Maria hermitage, originally a Muslim farmhouse that, after the Christian conquest, was ceded by Count Ramon Berenguer IV to Bernat de Bell-lloc in 1149. Opposite is the defence tower which was part of a fortress built in Islamic times to control the mouth of the river. The castle was built next to the ruins of an ancient Roman villa that has been uncovered. Above the tower doveled door there are four slabs with inscriptions that recall the reforms that were made in 1586, 1856 and 1936. In the neighbouring town of Camarles are still standing two medieval towers, one since the twelfth century, is the Castle of Camarles ceded in 1149, two years after the capture of Tortosa, by Count Ramon Berenguer IV to Guillem de Sunyer. About the castle just a robust circular tower, restored in 1990 and some medieval ruins remains. Not far away were found the ruins of an Iberian settlement and pieces of terracotta with representations of the goddess Tanit. The second is Torre de la Granadella, at the opposite tip of town, which had the number 46 in the optical telegraphy network. There is a last tiny fortress, this one near Poblenou del Delta and that had been isolated in the bay of Alfacs, it’s the Tower of Saint John that was part of the defences commissioned by Felipe II to the engineer Cristóbal Rota Antonelli in 1576. 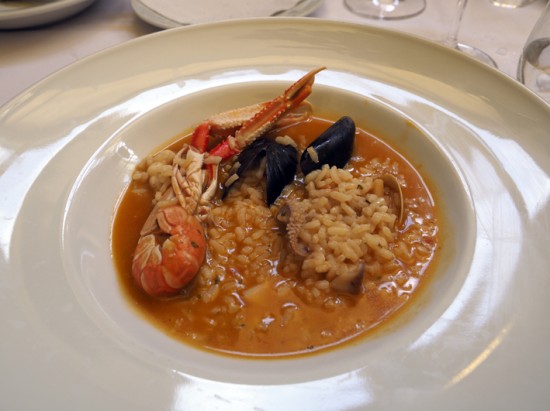 Rice crop also has an undeniable effect on the seasonality of the landscape which has modified the life cycles of the species by adapting to crop cycles. Before the rice fulfilled the landscape up to the horizon, writer Sebastià Joan Arbó described the panorama in the delta: "In those days, the cultivation of rice was still unknown there. The riverbank was an uninterrupted plain of swampy land; the reed, the little grass and the bulrush covered the meadows, and the otters and the foxes swarmed everywhere in the swamps". (Tierras del Ebro, 1975). Another writer, Josep Pla wrote in the Guide of Catalonia, in 1971: “Aquí sentiu constantment la proximitat de l’aigua densa, gairebé aturada, embadocada, callada. Aquesta presencia impregna tot el paisatge, el color de la llum, la qualitat de l’aire”. ("Here you feel constantly the proximity of dense water, almost stopped, entranced, silent. This presence pervades the whole landscape, the colour of the light, the quality of the air").

Since the month of April, when through channels and ditches the rice fields are flooded, the delta becomes an immense mirror that reflects clouds and sky in the earth and multiplies the scenes by two, creating a parallel life, inverted, on the ground. The mirror, before breaking, becomes an endless green surface that covers everything waiting for the collection to arrive. In the wintertime the water evaporates drying the plots.

From there the rice of the Delta, one of the few that has recognized the protected designation of origin, goes to the kitchens and to the tables of the restaurants that are scattered in the territory where the local specialties are served. Exquisite dishes of rice with shrimps, with cuttlefish, with fish... Again, about gastronomy, Pla wrote: “en el país discuteixen si les anguiles són mes bones que les granotes o les granotes millors que les anguiles”. ("In the country they argue if eels are better than frogs or frogs are better than eels"). 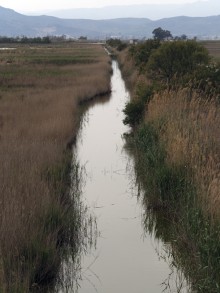