It goes deep inside Trieste old port waters as if it were a sharp weapon, defying the clash of the waves or the violent north wind that pushes the water on the pier. Here steamers moored coming from distant harbours, and since the beginning, on gentle days, it was for the Trieste people a favourite place for the walk. 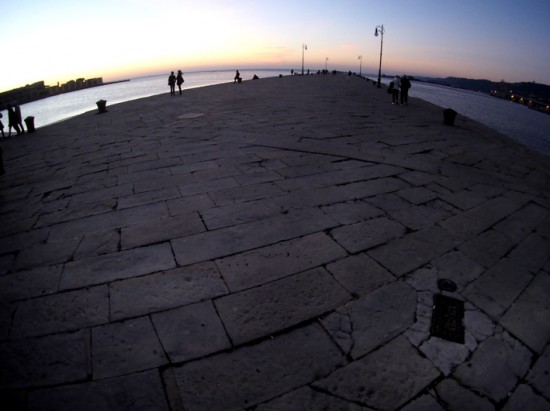 The long stone footbridge, reaches almost one thousand feet, separating San Giorgio and San Giusto mooring pools. Truly Molo Audace, the Audacious Quay, lives up to its name deeply penetrating into the old port waters, although the origin of its name does not obey this reason. On a clear winter day even Alps snowy peaks can be seen on the distant horizon.

The origin of the dock dates back to 1743 when its construction began taking advantage of the wreck, two years before, of the Austrian warship San Carlo, from which it would take its first name. After eight years, the new dock went three hundred feet into the harbour and had a width of 62 being linked to mainland by a wooden swing bridge. Access would be changed for a fixed one in the successive extension works, the first one in 1778 giving 62 feet more to the breakwater and 433 feet were added in 1862 reaching already the total length that it currently owns: 807 feet.

In addition to the activity generated by the steamers that moored in to load and unload goods or passengers, Triestiners took by habitude to frequent the space making longer the Sunday walk they called liston. The name, liston, comes from the line drawn on Piazza Grande, now Piazza dell'Unità, marking the area reserved to patricians, a use inherited by late nineteenth and early twentieth centuries wealthy classes. The walk was popularized following an almost fixed route, as in a liturgical ritual in which they crossed Piazzale di San Antonio Nuovo, Via Dante, the Corso, and Piazza della Borsa until Piazza Grande. There, if weather permits, the walk was extended up to San Carlo Quay. The photographic documentary library of the Civici Musei di Storia ed Arte of Trieste preserves numerous graphic testimonies of the pier, including some stereoscopic shots. Also a Triestiner painter, Carlo Wostry, portrayed the sunsets on the pier at the end of the 19th century, today exhibited in Civico Museo Sartorio. 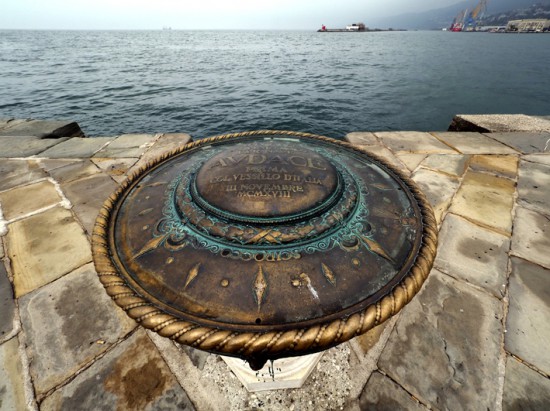 After World War I, with Trieste territory ceded to Italy after Austro-Hungarian Empire defeat, on November 3, 1918, at four o'clock in the afternoon, moored the Italian Regia Marina torpedo boat named Audace, disembarking two hundred Carabinieri and General Carlo Petitti. Among others, Triestiner painter Cesare Sofianopulo, suggested changing the name of San Carlo pier to that of the first Italian ship that landed in the city.

The Audace had been commissioned by the Japanese government to the Scottish Yarrow Shipbuilders. It even had a name: Kawakaze. However, for some reason, it was acquired by the Italian government in 1916, when it was still under construction and reclassified as a torpedo boat. It measured almost 275 feet in length and displaced up to 1364 tons at full load. After the Triestiner episode she served in the Italian navy during World War II until in September 1943 was confiscated and renamed TA 20 by the Germans. It was sunk in the Adriatic in late 1944 by the British destroyers Wheatland and Avon Vale. The Audace rests on the sea bottom slightly sloped portside at 260 feet depth. On Vittoria lighthouse wall is exposed an anchor that is said belonged to the Audace, actually was one of those that equipped the R.N. Berenice.

Next to the quay, in Riva del Mandracchio, in front of Piazza dell'Unità, there are two statues linked with the landing of the Audace, both works of Todi Fiorenzo Bacci and installed in the year 2004. One represents a bersagliere flying a flag, beside are the set called Le Ragazze di Trieste showing two young female figures presumably knitting the tricolour Italian flag. 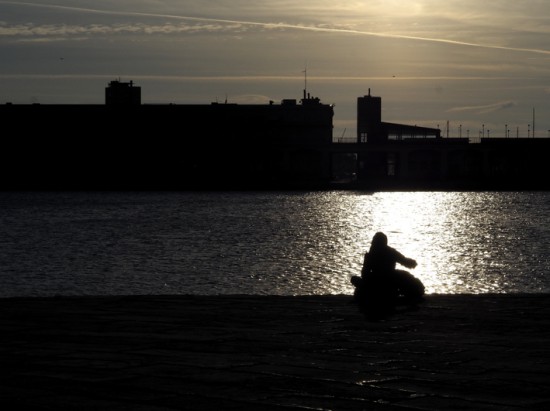 From time to time the news that feed local newspapers are produced next to the pier. On Sunday, May 15, 2016 it was cleared after undercover an explosive artefact of World War II while cleaning the harbour bottom. The incident ended when the explosive was deactivated. Same year’s November a fishing boat was intercepted operating illegally in the environs. The Coast Guard proceeded to seize the fishing and the imposition of a twelve thousand euros fine.

There are those who consider a crime visiting Trieste without walking by the Molo Audace, and there are also those who dedicated it their verses. Just Triestiner poet Umberto Saba: “Per me al mondo non v'ha un più caro e fido luogo di questo. Dove mai più solo mi sento e in buona compagnia che al molo San Carlo, e più mi piace l'onda e il lido?” (“For me, the world does not have a place dearer and more reliable, than this one. Where ever I never feel more alone and in good company than at the pier / San Carlo, although I rather like waves and beaches”). 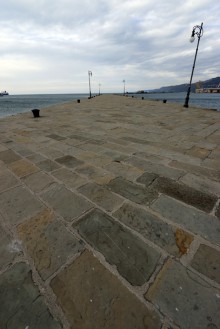 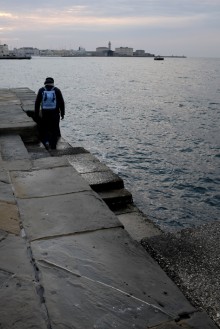