An anthology of contemporary Greek poetry, the number of a hotel room and other diverse coincidences make up a kind of casuistry, a dose of Hellenistic serendipity. 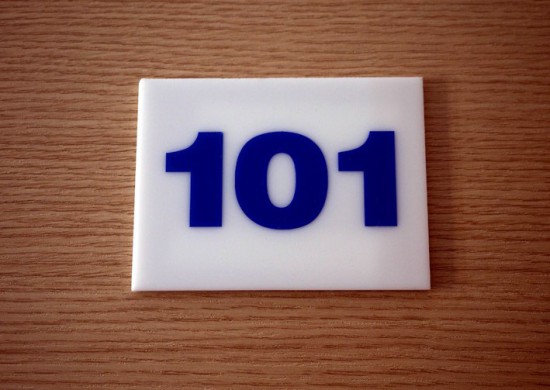 Ένα μηδέν ένα, ena miden ena, 101, is a compilation of poems of one hundred and one Greek authors, a selection and translation by the writer and translator Yannis Goumas published in Athens in 2013. Goumas has translated the work of 226 Greek and Cypriot poets, among those who have chosen one hundred and one for this book. The anthology includes two consecrated names from the Greek literature, C.P. Cavafy and Yorgos Seferis, however, obviate two others such as Odysséas Elýtis or Yannis Ritsos, widely translated, particularly Elýtis, recognized with the Nobel Prize for Literature of the year 1979. The remaining ninety-nine poets are contemporary authors, ordered chronologically the first among them is Ioánnis Polémis (1862-1924). Among the newest are five authors born after 1980 and scarcely published outside their literary ambit, the youngest is Anéstis Melidónis, who arrived to this world in 1986. 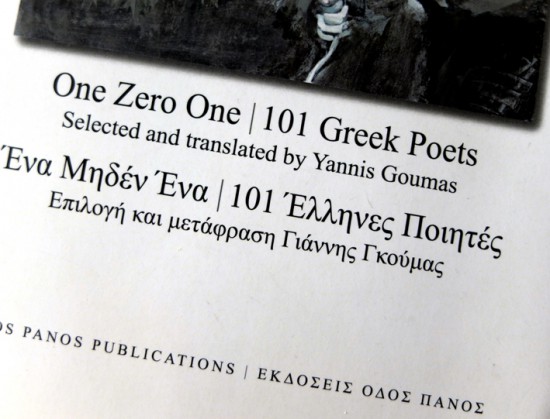 Some years ago, we spent some nights at the Phaedra hotel, conveniently located in a corner of Lisikratous street with the square where the small Orthodox church of Aghia Aikaterini is located. It’s a small three-storey building where most of the rooms, although do not have their own bathroom, have a small terrace that overlooks the square. It is a rather modest accommodation, despite the prices that, in Athens, always tend to rise, but it is comfortable, clean and wonderfully located in the heart of the Plaka neighbourhood and, almost, almost, at the foot of the Acropolis. The name refers to the myth of the daughter of King Minos and Pasiphae, Φαίδρα, Phaedra, who, abducted by Theseus after leaving her sister Ariadne on the island of Naxos, falls in love with her stepson Hippolytus, son of Theseus and Antiope. The outcome was already sensed that it would not be good. Nevertheless, returning to Phaedra, the hotel, the first time we overnighted there, they gave us the room 101, with the bathroom that English have to call in suite. Παρακαλώ, κλειδί δωματίου ένα μηδέν ένα (Please, room key 101). With that simple formula, which I have not yet managed to memorize, they gave us the room key. We have returned several times, the last one this year (2019). Back to ένα μηδέν ένα, one, zero, one. From the terrace, equipped with a small table and two chairs, you can see the whole square, mainly occupied by a garden with two palm trees, an oak tree and some others that I cannot identify. There are also tall bushes, including several jasmine scents still laden, in September, with fragrant white flowers. Another good part of the square is occupied by the Orthodox church of Aghia Aikaterini which late, on summer sunsets, always has a wedding to celebrate. The guests almost hurried down the ramp leading to the covered narthex. The church is a beautiful example of Byzantine religious architecture and, with modifications and repairs, has been there since the mid-eleventh century. It has an attractive octagonal dome supported on four canopies of two waters each exceeded in height by the two cedars that flank the temple. 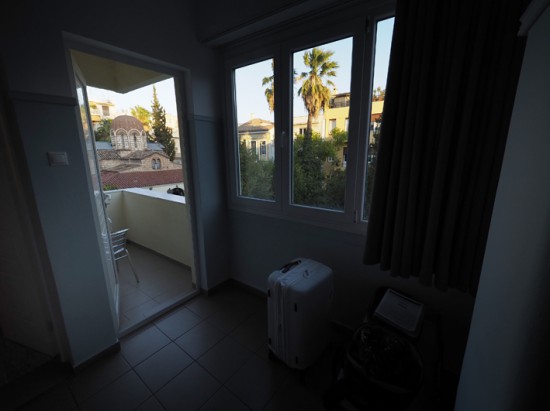 At the other end are the remains of some classical era construction, there are two columns that support an architrave section and the bases of several shafts. A cat run scared between them on the way to the iron fence surrounding the garden where a bicycle is secured and where taxis stop wait for a customer to take to destination. One of them had this license plate: TAA 0101. Someone looks out from the window of an attic, behind the window of another floor there is glimmered furniture, from the seventies, a showcase stores books and ancient ornaments. I am sure that, if I counted them, 101 would be the number of windows that overlook the square, the number of the plants that grow in it, the number of the candles that are still alight inside the church, or that of the people who have crossed the square along the last fifteen minutes...

Ένα μηδέν ένα, ena miden ena, 101. The graphic similitude made me think about Eve, a friend of mine, and, by some casual association of ideas made me relate the number one with another Eve, the first woman, Adam's wife (which on the other hand it's the name of the neighbouring hotel) if it weren't because before was Lilith, the rebel one. 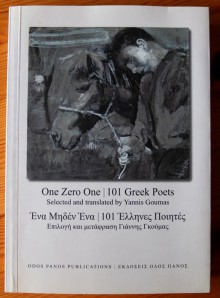 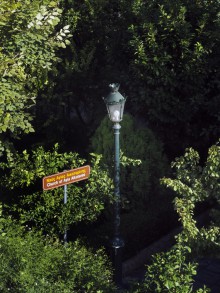