George Perec, the inimitable writer born in Paris, in his effort to describe things that are not worth telling, that what happens when nothing happens, tried to take a census and list about whatever existed or happened in Saint Sulpice Square. All this ended embodied in the publication, in 1975, An Attempt at Exhausting a Place in Paris. 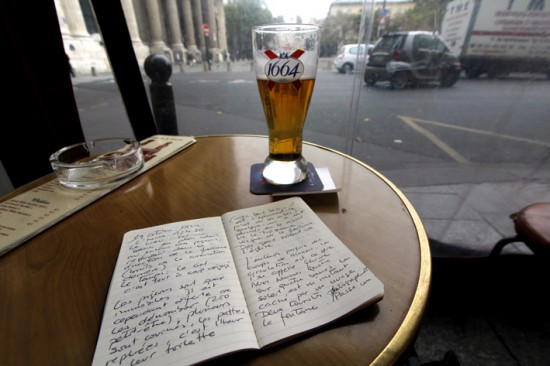 Perec devised the project to capture some Parisian spots along the time to show not only their evolution, but also is modified our perception of memory. It was the Tentative de description de quelques lieux parisins, an attempt to describe some places in Paris, or just Lieux. On his way to methodically plan a project he thought to visit twelve sites, liés à de souvenirs, à des événements ou à des moments importants de mon existence, (linked to memories, events or important instants of my existence) about which he would make two descriptions. The first as a field research scoring details, scenes, people... The second description would be made by heart, trying to highlight the difference between reality perception and the impressions or memories. This scheme should be repeated for a dozen years, between 1969 and 1981, generating a total of 288 texts. In the autobiographical Je suis né he would recognize that n’ai pas une idée très claire du résultat, mais je pense qu’on y verra tout à la fois le vieillissement des lieux, le vieillissement de mon écriture, le vieillissement de mon souvenirs: le temps retrouvé se confond avec le temps perdu. (I don’t have a very clear idea of the result, but I think we will see both the aging of the places, the aging of my writing, the aging of my memories: time rediscovered mistaken with time lost) However in 1975 he had already left the project. This was limited to the texts published, after his death, in the book L'Infra-ordinaire, which includes the visits he made to rue Vilin, in the neighbourhood of Belleville, between 1969 and 1975. It is in this period, in 1974 when he took his notes of Saint Sulpice Square. He stressed in the idea in the preface to L'Infra-ordinaire and anticipates a fragment in Un homme qui dort, 1967: De la terrasse d’un café, asis en face d’un demi de bière ou d’un café noir, tu regardes la rue. Des voitures particulières, des taxis, des camionnettes, des autobus, des motocyclettes, des vélomoteurs passent, en groupes compacts que de rares et brèves accalmies séparent: les reflets lointains des feux qui règlent la circulation…(From the terrace of a cafe, sitting in front of a glass of beer or a coffee, you look at the street. Cars, taxis, vans, buses, motorcycles passing in compact groups split by the rare and brief moments of calm: the distant glare of the lights that regulate traffic...)

Perec is particularly focused on things and dull events, in the most daily life aspects and because of its natural nature, imperceptible. Insists in those things that happen when nothing happens: Les journaux parlent de tout, sauf du journalier ( ) Ce qui se passe vraiment, ce que nous vivons, le reste, tout le reste, où est il? (The daily press talks about anything but day to day life ( ) what actually happens, what we live, the rest, all the rest, everything else where is it?) (L'Infra-ordinaire), Il faut y aller plus doucement, presque bêtement. Se forcer à écrire ce qui n’a pas d’intérêt, ce qui est le plus évident, le plus commun, le plus terne (Should go more slowly, almost awkwardly. Force to write about that which has no interest, which is most evident, the most common, most off) (Espèces d'espaces). 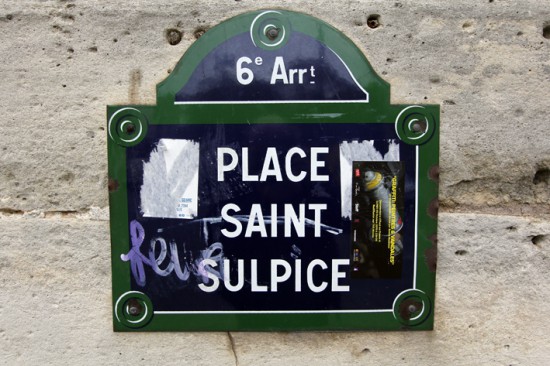 To try to examine a place in great detail, or the act to have been examined a place or examine someone who has examined a place and how it has examined, we must set precise parameters that ease the counting and analysis exercise. It is necessary to insist that two of the most useful parameters for this Cartesian work correspond to space and time dimensions. First let's define the time. The writer, named George and Perec as last name, went for three days, from 18 to 20 October 1974, to the square to record in a diary their particular observations divided into three chapters, cleverly titled Day 1, Day 2 and Day 3. On Friday 18 October he arrived at 10:30 to the Tabac de Saint Sulpice. At 12:40, allegedly after lunch, he went to Café de la Mairie. At 15:20 to the Brasserie-Bar La Fontaine Saint Sulpice. At 17:10 he returned to the Café de la Mairie. On Saturday 19 October the subject known as Georges Perec slipped at 10:45 again in Tabac Saint Sulpice. At 12:30 he sat on a bench in the square. At 14:00 he returned to the Tabac. On October 20, Sunday, Perec, Georges, he sat back down at the Cafe de la Mairie, this time at 11:30. He repeated the fact, and last in the course of his remarks, at 14:00. It seems obvious that despite their interest in the infraordinary matters, Georges, Perec, drew a downward trend from Friday to Sunday, frequenting fewer times the square. It is not objectionable at all.

Who writes these lines would test the thesis of the named Perec, Georges. To do this, with the exception of the first day for reasons that are irrelevant, nor would change the outcome of the investigation, was unable to attend, he tried to repeat, even where the possibilities and the patience and desire permit, the perequian analysis methodology, attending the same days of the month, not the year: October 19 at 13.55 and 17.05 and October 20 at 9:50, exactly after 41 years.

The second essential parameter is the space, the physical space where things and people stay, move or things happen. Limit this is not a very difficult task. Saint Sulpice Square is located in the sixth arrondissement - district - Paris, more specifically not far away from the Sorbonne University where Perec, Georges, went to studied sociology, not far from the rue Soufflot, one that leads to the Pantheon and where there’s a fine restaurant serving a delightful and huge beef ribs. Saint Sulpice is equidistant between the Luxembourg Gardens and the famous Les Deux Magots cafe on the Boulevard Saint Germain des Prés, where Verlaine, Baudelaire and Mallarmé used to meet. Against all odds, Sevres-Babylone, Babylon, remains to the West.

The writer used as observation posts the Tabac Saint Sulpice coffee shop, the Café de la Mairie, the Fontaine Saint Sulpice cafe and a bank. Do not forget the name of the square: Saint Sulpice. This main feature is the great unfinished facade of the church of Saint Sulpice, a neoclassical design made in 1754 by the Italian architect Giovanni Niccolò Servandoni, who was inspired by the work of Wrenn in Saint Paul's Cathedral in London. Inside the temple, in the Angels Chapel, there are three important frescoes by Eugène Delacroix: Jacob Wrestling with the Angel, St. Michael defeating the devil, and Heliodorus Being driven from the temple; also a carving of St Peter which has the foot polished because of the caresses lavished by the faithful, remembering the right breast of the statue of Juliet in Verona, and a peculiar gnomon, which was used to calculate the exact date of the Christian Passover. The Saint Sulpice gnomon has no rod to cast the shadow; this function is exercised by a drilled small hole pierced on a metal plate on a door. The sunlight that penetrates projects a beam that runs along the course it has been set with a metal line parallel to the meridian. The square marble plaque points, when the light shines on it, the summer solstice. At the precise moment of the winter solstice the light should be projected sixty feet beyond the church wall; to make up that distance the metal go upwards to the top of a 33 feet high obelisk.

In the middle of the square there’s a monumental fountain which yields its corners to four recumbent lions statues holding the shield of the city in its claws while overflowing water falls from the two upper levels of ponds, their fierce expression seems to scare even the reflexes that are projected onto the surface of the water. On the highest level four vases decorated each with a pair of faces spit water from their mouths, replacing the lions of the bottom corners. Amid a dome contains in each of its lateral niches the statues of famous French who lived between the seventeenth and eighteenth centuries, during King Louis XIV rule; they are known as the sacred orators: the preacher and bishop of Meaux, Jacques Bénigne Bossuet; the writer and Archbishop of Cambrai, François de Salignac de la Mothe Fenelon; Esprit Fléchier, bishop of Lavaur and Nimes and also the bishop of Clermont Ferrand, Jean Baptiste Massillon. Each of them faces each of the cardinal points, they, the bishops who never became cardinals.

Saint Sulpice, Mabillon, Canettes, Bonaparte, Férou, Servandoni, Palatine and Garancière streets meet on Saint Sulpice Square. Remain in their place, as described by Perec in 1974, the sixth district city council, opposite to the church, the church of Saint Sulpice, opposite the city council, the Centre de Finances Publiques, the police station, the rue Saint Sulpice kiosk, the Café de la Mairie and the bus stop. Gone are two cafeterias, the Tabac and La Fontaine, an essential reason why the exercise have been limited to the Cafe de la Mairie, where, by the way, on Tuesday, October 23, 2012, at 19.30, a plaque was installed in imitation of those with the names of streets and squares. This one dedicated to the famous writer, lacking of vowels, no less than E; a wink to his novel La Disparition.

The same bus lines are still working: the 63, from the Gare de Lyon and towards the Porte de la Muette; the 70, from Radio France, Dr. Hayem square until the City Hall; the 86, between Saint Germain des Pres and Saint Mande Demilune; the 87, Champs de Mars to Porte de Reuilly and 96, between Montparnasse and Porte des Lilas. For line 84, Porte de Champerret to Panthéon, has created a special marquee in the rue Bonaparte. 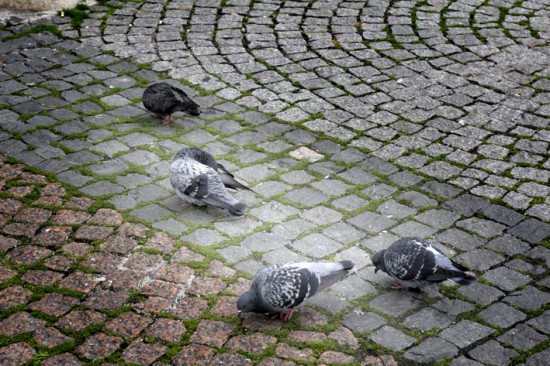 Forty-one years after the volume of traffic and the type of vehicles seems to have changed, no 2CV model does not appreciate, neither parked nor in circulation.

People continue coming and going, some are waiting for any of the buses, there’s who eats a sandwich on a bench, there are couples taking pictures at the foot of the fountain, grandparents kissing to grandchildren, somebody start a motorbike, someone lifts an arm to call a taxi, a woman drinking a soda while with the other hand holds her son car while looking at the kiosk. There are those who see their mobile phones, 41 years ago this gesture was unseen.

The draught beer has risen sharply in price, such Perec, Georges, would be shocked, as certainly any other, whoever who was.

A bike with chromed handlebar is attached to a traffic sign; there are billboards and information, letters, many letters.

The pigeons are still flying off and returning without any apparent reason, but probably most are likely not be the same.

From day to day weather have changed, it’s cloudier but doesn’t rain.

Garbage men: it’s the time of collection and the truck comes to empty the containers.

Theatre Tristan Bertrand plays Les Faux British; that what a sign that revolves around a metallic cylinder says; those where long ago posters were fixed with glue.

It's time for coffee with milk or just plain coffee and people do not take the time to see it goes by.

Pigeons take flight again and return for no apparent reason, probably, most likely, they are the same. 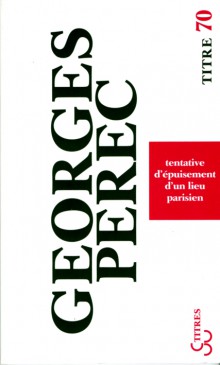 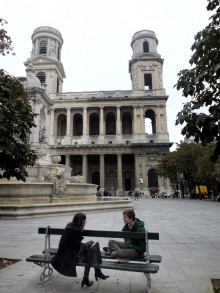