Homepage > Florence from the Campanile

Florence from the Campanile

Visitor is warned. There is no elevator. In return there is any other thing than 414 steps leading inexorably to the top of the Giotto’s bell tower, 270 feet above the ground. Following one after another, passing through narrow windows that provide an indication about the view that will extend under your feet when you have recovered breath. 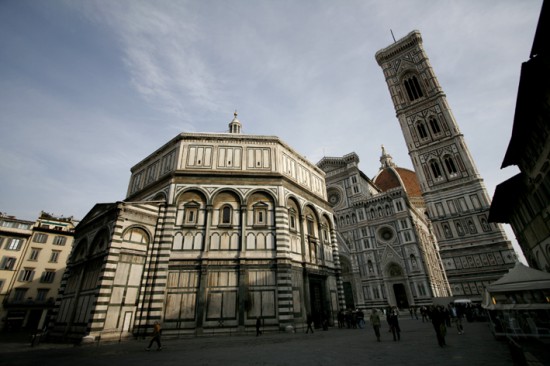 It is then, when oxygen returns to circulate normally, when you can clearly see the spectacle that unfolds to your eyes. The first impact corresponds to the massive Santa Maria dei Fiore Cathedral dome. Designed by the architect Filippo Brunelleschi exceeds three hundred feet high and 140 in diameter. Although the cathedral was begun in the late thirteenth century the Gothic facade would not be completed until the nineteenth. The combination of marbles white from Carrara, green from Prato and pink from Maremma, as in the baptistery and the campanile gives a certain air that inevitably suggests a huge pie pastry. Inside, Duomo dimensions are not minor and the feeling of being in a boundless space is evident in the ornamental soil maze, or in the distant Judgment fresco by Giorgio Vasari and in front of Dante's Divine Comedy oil canvas by Domenico Michelino.

Slightly turning head left the gaze, facing the front of the Duomo is San Giovanni octagonal Baptistery. From there, street actors are perceived sometimes outnumbering foreign visitors. They usually dress in white, perhaps to blend in with the marble surroundings. Throughout baptistery premises passed until the mid-nineteenth century, in their first months of life, all Catholics born in Florence, now come in the foreigners who come to admire the doorways, especially the Doors of Paradise, which together with the north ones Lorenzo Ghiberti took 21 years to complete. For the future generations he left his bust among twenty others that are part of the ornamentation. 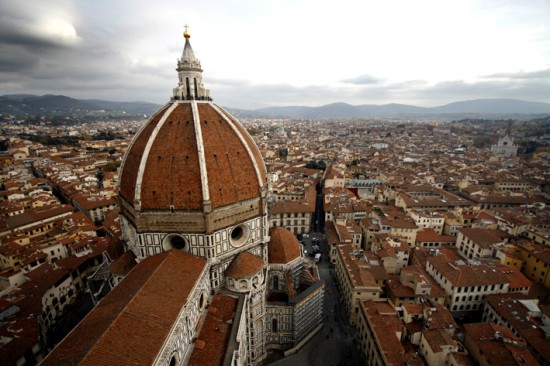 From the top of the bell tower is perfectly seen the Piazza della Signoria, particularly the crenelated tower of Palazzo Vecchio that now houses municipal offices also was the former headquarters of the Florentine Republic and the Medici residence until they moved to the Palazzo Pitti. What are not being seen from above are the Loggia dei Lanzi and its outstanding statues. An old marble lion watches with fierce look all that move in the square, perhaps because the rest of his company remains motionless. All around rise the gigantic David of Michelangelo, since 1910 a replica, the original is preserved in the Academia Gallery, Hercules and the Rape of the Sabine Women, Perseus with the head of Medusa. In the middle of the square is the Mannerist Neptune fountain and few steps away the equestrian statue of Cosimo I Giambologna, near where Girolamo Savonarola, the Dominican friar confessor of Lorenzo de Medicis who criticized Machiavelli in The Prince. A plaque on the pavement indicates the exact location. Machiavelli also wrote, commissioned by the Medici, the history of the city, Istorie Fiorentine.

The third main square in Florence, also visible from Giotto’s bell tower, is that of the Republic, with its grand arch, its porches and the omnipresent carousel, but most of the Renaissance legacy is in the great museum that is the Uffizi gallery, first Italy and worldwide museum of Renaissance painting. Here are works by Vasari, Fra Bartolommeo, Michelangelo, Raphael, da Vinci, Giotto, Botticelli, Piero della Francesca and Fraangelico that can’t be seen in a whole day tour.

Ponte Vecchio, another Florentine icon, crosses the Arno upon its own reflections. The best place to observe it with the attention it deserves is another bridge, the one of Santa Trinita. The bridge is covered with shops, which once occupied furriers and butchers until they were expelled in 1593. When these moved the guild of jewellers occupied the stalls and shops. The Medici commissioned Giorgio Vasari to build a long private corridor to communicate its two palaces, the Gritti with Vecchio in the Signoria.

Santa Croce and Santa Maria Novella are the prominent basilicas in Florence. The first became the Pantheon of Italian glories, where are buried Machiavelli and Galileo Galilei. Also here the writer Stendhal suffered for the first time the syndrome which took his name. Behind the Palazzo Pitti and Boboli Gardens the Basilica of San Miniato al Monte recalls the saint beheaded in the third century, who is said he picked up his own head and crossing the Arno went back to his hermitage in Mons Fiorentinus. 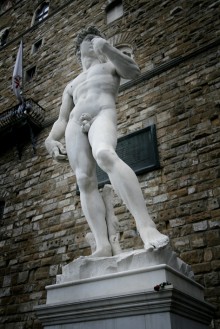 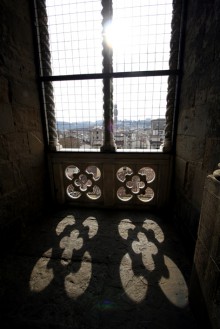