Few kilometres south Christchurch, almost in its outskirts, stands a large volcanic crater open to the sea in its south side. Kai Tahu for Maori, Banks, in recognition of Joseph Banks, naturalist aboard James Cook’s Endeavour, who in February 1770 was wrong to believe that it was an island rather than the peninsula actually is. In the cove, a perfect natural harbour, sits the quiet town of Akaroa which houses its six hundred inhabitants. 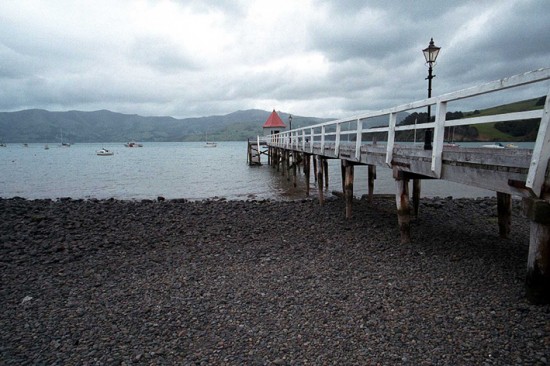 What makes particular Akaroa, New Zealand, are small details like the name of some stores, hotels and restaurants, and also some of its quiet streets: rue Jolie Rue Lavaud, rue Benoit. The Little Bistro, Chez la Mer, Ma Maison ... French names in English-speaking archipelago. Everything has a reason to be. And the French names in Akaroa dates back to the times of the only French colonization attempt on Maori land.

In the first nineteenth century decades, before the islands belonged to British Empire, whalers of different nationalities landed on Banks Peninsula and its environs, Port of Lyttelton. Among them the captain of the vessel Cachalot, Jean François Langlois, who operated there between May and August 1838, while the corvette Heroine, led by Jean Baptiste Cécille, arrived in June, mapping with maximum detail the whole area. Langlois came to bespeak the purchase of the peninsula with the Maori chiefs and even anticipated a first deposit of one hundred and fifty francs on a future contribution of one thousand over a territory of about four hundred square kilometres. Excited, Cécille, Heroine captain, hoisted a French flag declaring sovereignty on the place.

Langlois returned to France in search of investors and settlers. Among the investors persuaded Alejandro Ramirez Maria Estevez Aguado, Marquis of the Guadalquivir Marshes, based in Paris, though eventually Compagnie Nanto-Bordelaise was created to fund the project to buy new land, colonize the already acquired around Port Louis-Philippe, the enclave now is Akaroa, and consolidate the whaling industry. 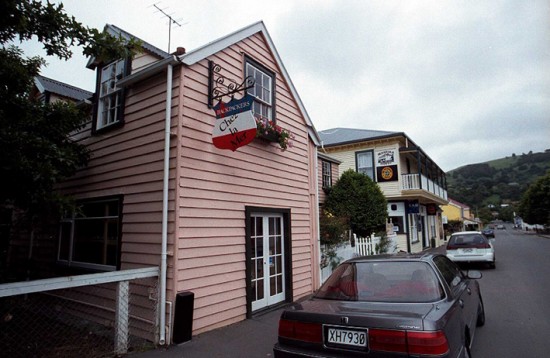 In March 1840, sixty-three settlers were in Rochefort ready to go. Among them fourteen married men with their families totalling fourteen children, plus nineteen singles and half a dozen German people. They boarded a ship provided by the Paris government: the five hundred and fifty tons Mahé, which was renamed Comté de Paris. They sailed on the 20th. To protect the settlers and their commander, Charles François Lavaud, could exercise the powers of the Crown Commissioner was sent a French warship: the Aube.

But shortly before, on January 29, the Navy captain of his Gracious Majesty Queen Victoria, William Hobson had arrived aboard the Tory to Bay of Islands, in the North Island, coming from Plymouth, Devon. On February 6 Treaty of Waitangi was signed with all the Maori heads of the clans and tribes by which New Zealand, in its entirety, became de facto part of the English crown. In May, Hobson proclaimed British sovereignty over the South Island under Cook's discoveries and signatures of the southern island heads added to the Treaty, including the heads Iwikau and Tikao from Banks area.

On August 19, the first French settlers landed in Akaroa. Late. Some late. Despite undergoing British sovereignty they decided to stay in the bay, in what is now, opposite Akaroa, French Town. German families settled a little further north, in Takamatua, until 1915 known as German Bay.

In 1849 Nanto-Bordelaise Company was liquidated and its remaining assets sold to the New Zealand Company.

In Akaroa remain some buildings erected then, that today are part of a heritage cherished by its inhabitants. It is a kind of badge of honour. In 1940, near the beach, a small memorial was erected to mark the first anniversary of the landing of the French colonists. A second memorial stone was inaugurated in April 1991 by the then French Prime Minister Michel Rocard. Right there permanently waves a French flag. Do not claims sovereignty but move a petit morceau from past to present.

Personally I keep thinking that the name of the main character is no more than a fate’s joke. A Frenchman named Langlois, l'anglois, the Englishman! 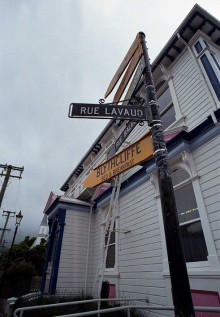 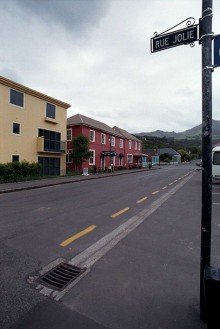