From Menorca to Guipuzcoa there an indelible connection that lasts over time, a thread of memory reinforced by some old postcards and memories of some names and places, old albums and pencil strokes not just deleted.

Ciutadella’s Big Beach is barely a beach, it’s rather a pretty deep cove, named es Degollador, sheltered from the winds and the movement of people left to the south of the city, a place that was previously just in the outside and has finished being absorbed by urban growth. Where there was nothing else than pebbles and a few handfuls of sand, presumably white, now there is a sidewalk and next a narrow promenade there was an empty space in the summer of 1978 occupied by some tents, when camping was absolutely free, an economic resource for a holiday without money. Mitxel, Begoña, Arrate and Alpiria occupied one. We, their neighbours, befriend them and held friendship when we leave the island and landed in Barcelona, where we offered them accommodation in our shared student apartment near St. Paul Hospital. We used to guide them downtown, around Royal Square, the Abracadabra, a den in Nou de Sant Francesc Street already disappeared. There were installed the first ping pong gaming machines and inside the premises consisted in a double sitting row facing each other where people seated wherever they wished. In Royal Square we used to go to Minotaur, Texas or the Glacial. The first one, also disappeared, applied the same philosophy as Abracadabra about accommodation but on a smaller scale, as the local itself it was. Texas, years later become the Sidecar, featuring live music and very often flying chairs the parish used to avoid ducking their heads. The Glacial still opens its doors in the same corner of the square but has moved its clientele by eager tourists and then beer was served in litter jugs called tanks. A few days later Mitxel, Begoña Arrate and Alpiria took the way back to Zarautz, in the Basque Country.

In April of the next year, a week after having been back in Ciutadella, a friend and I travelled d together by motorcycle, or at least we had tried, to Zarautz. We loaded the bike, a second-hand Ducati 250 with backpacks and other belongings and leave behind Barcelona. We decided to take the route through southern France between the two seas, so the road took us to La Junquera while identification on the border crossing was still an unavoidable procedure. After Perpignan we went leftwards for the D117, which passes through Estagel and heads towards Quillan, Foix, Saint Girons and Tarbes... where the motorcycle concluded its tour. At the end of Tarbes, on the old road, there is a long straight towards Pau. The road was lonely, and the motorcycle probably was running at 70 miles per hour when suddenly appeared to the right a hesitant sedan. It was not known whether he would accelerate onto the track or back to give free passage. He did neither one thing nor the other, stood in the middle as the motorcycle rider expected some reaction. Time seemed frozen just since the second the front tire slammed into the left front of the vehicle side panel. I felt my back compress harmoniously against the car plate cover hood while the back of the helmet was slightly split during the same impact. The flight continued forward, back in the air I saw pass the asphalt as I was gradually approaching it. First it must have been all over the body, without being able to specify precisely where, then came both hands fingertips, which, although protected by gloves, accused the hit violence and finally cracked the helmet visor, splitting in two halves. My fellow pilot flew about 150 feet away to bounce off against the wheel of a tractor parked near the road. The next phase of consciousness was to perceive my ignorance about the language, someone was asking me about my state: Ça va? Tu vas bien? Lying on the floor I just was able to answer contradictorily: -Moi je ne sais pas, je ne parle pas français! Someone who came later asked about the motorcycle people. The motorbike was completely useless with the fork bent against the frame and the wheel disfigured as if a giant had crumpled with a hand and thrown it away. 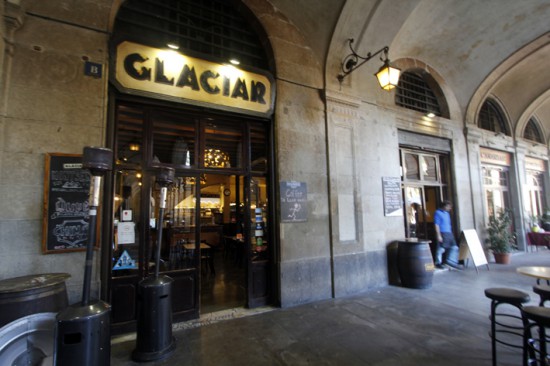 In Pau we boarded a train to Irun, where, at night, customs police seemed to smile seeing us with helmets and tools in hands but without the motorbike. Next morning the journey concluded leaving San Sebastian and arriving to Zarautz. For some reason I can’t remember the motorbike driver decided to return almost immediately. Meanwhile, I met again with Mitxel, Begoña, Arrate and Alpiria and I met too Frantsis and other friends. Mitxel took me to his home, Hondartza Etxea, meaning the house of the beach. A solid two-story house located in the eastern part of town and, as its name indicated, almost in front of  the beach. Next to the dining room, I fit in a small room where there was a folding bed. We used to eat in the kitchen, near a window overlooking the neighbouring orchards. After lunch, invariably, we played cards. Mitxel and his sister were berated by the mother when talking among themselves in Basque during the game. She didn’t want the Catalan believed that they were cheating on cards. Then we went to Model Cinema in Zigordia Kalea, to take a nap. It was cheap and had comfortable armchairs. And from there to take some zuritos – small glasses of beer – passing before through some store where Mitxel tried to teach me how objects were named in Basque language. I do not remember any names. In the tavern they engaged in discussions in which I simply asserted or denied: bai, bai or ez, ez, without even knowing what they were talking about. It was only necessary to look at the expression on their faces or in the emphasis they put on the conversation and smile. Another day we went with the girls walking to Guetaria, its port and the Mouse – how is called the rock heading to the sea on the point-.

When the time came, I put my finger to the right direction on the road, and from there I passed Pamplona, ​​Zaragoza until Barcelona. Somewhere I heard Simon & Garfunkel’s song Homeward Bound.

In July 1980, a whole group of people woke up in Pamplona. We ​​had not yet read Ernest Hemingway’s The Sun also Rises, but we were there just for that. And after some days we were so exhausted that we need to take some holidays in Zarautz. There were Mitxel, Begoña, Arrate and Alpiria to welcome us. 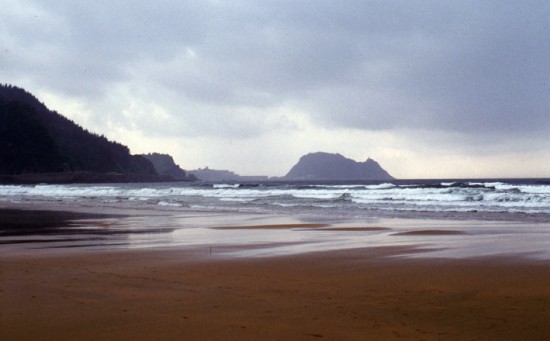 I have some slides and pictures from a morning walk along the beach, the largest of all Guipuzcoa, a beach that practically disappear at high tide and that seemed to stretch to the horizon when it’s low, an unusual phenomenon in the Mediterranean. It’s a beach with reflections of storm clouds in a sky grey pearl on the puddles that formed in the sand, where Sorolla have painted his family at twentieth century first years. The footfalls drove to Mollarri, a former warehouse of ore. In its heyday, in the early twentieth century, cantilevered wagons loaded in Andazarrate mines and six miles beyond dumped its load on ships anchored in the island’s dock. We came to rest and we ended up still more exhausted. We gathered our staff and we said goodbye to Mitxel, Begoña, Arrate and Alpiria and we dispersed, some to Barcelona, ​​others to Madrid, where other stories began.

Eventually I found the black & white enlargement of a photograph of the house of the beach, Ondartza Etxea, then written without H. 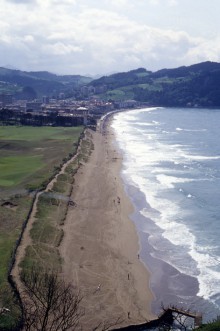