This neighbourhood located to the west of the Dutch city has gone from being an inhospitable slum to a desired residential area exempt of the tourist massification of the urban centre along a slow process of gentrification. 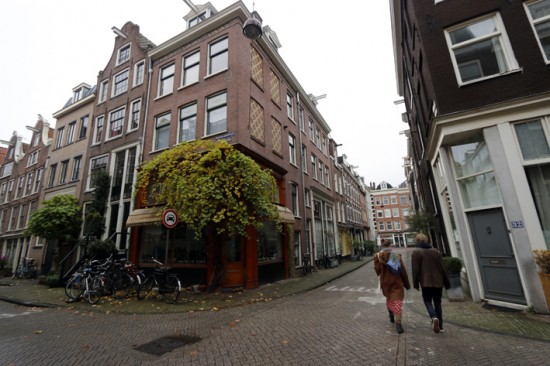 At the moment Jordaan belongs to the district Amsterdam-Centrum and forms an arch section beyond Prinsengracht canal up to Lijnbaansgracht. To the north bounds the Browersgracht, the breweries' canal, and the south ends in the Leidsegracht, almost right where the Milky Way is, the gilded Melkweg of the 70s that today continues working as a cultural centre. The name had a reason to be as formerly it had been a factory of dairy products. The space between these four canals began to be urbanized without any planning since 1612, when it was called Het Nieuwe Werck, the New Labour, and it was occupied by immigrants and by refugees persecuted in the wars of Religion. The streets followed the layout of the old dykes and roads with sewers open to the canals. In the nineteenth century the two main waterways that crossed the neighbourhood were covered: Lindengracht and Rozengracht, the canal of the limes and the roses’ one. About the year 1900 the neighbourhood reached its maximum level of saturation, exceeding 80,000 inhabitants, at the moment it has about 19,000 people. One of the most notorious inhabitants of the district was the painter Rembrandt van Rejn, after his bankruptcy and the auction of his goods and printing press, in 1660, he had to move to a more modest residence and found it in Rozengracht, when the canal was still open and established his study in Bloemgracht, both in the Jordaan.

In the middle of the 20th century, many buildings lacked adequate maintenance or were in poor conditions of habitability; a nearly comprehensive demolition plan was proposed but saw a practically unanimous rejection opting then for the rehabilitation. The consequence of the upgrading of the area was the rise in prices and a process of gentrification that led most of residents to seek cheaper accommodation in dorm cities while Jordaan attracted artists, young professionals and wealthier families and were opened new restaurants, cafes, art galleries and curious businesses, such as Brillen, specialized in old glasses. 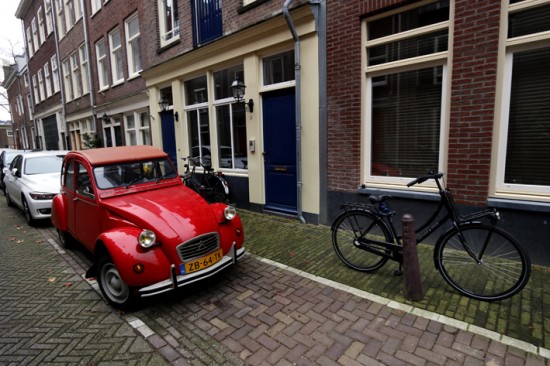 Jordaan lacks big monuments or attractions that visitors collapse. Its charm lies in the calm of its narrow streets, although not too much, and in the vegetation that grows cared by the neighbours, in their gardens or hidden courtyards that here they call hofjes, not in vain Jordaan’s name comes from the deformation of the word French jardin, garden, as the exiled French Huguenots called it. In fact, there are numerous streets bearing names of plants or flowers. There are houses that bear a stone slab on the door, showing the symbol of a profession that the occupants were supposed to profess. A cow, a rooster and a lamb represent a butcher, a pair of scissors a tailor. These are reminiscences of the seventeenth century.

Also attractive are its street vending markets, on Saturdays Lindenmarkt offers  food alongside the Lindengracht, and products of ecological origin on the Noordermarkt which on Sunday mornings becomes a flea market under the bell tower of Noordekerk, the main church built in 1620 by Hendrick de Keyser and his son Pieter. On Mondays, in Westerstraat, there is about everything, fabrics and food.

Jordaan also has its own small museums. One about the history of the neighbourhood itself, with information only in Dutch, on the corner of Vinkenstraat with Nieuwe Wagenstraat, sharing a elder people residence; the Pianola Museum in Westerstraat 106; the one dedicated to the writer Theo Thijssen, in Eerste Leliedwarstraat 16; the Houseboat Museum, in Prinsengracht, opposite number 296, near the Tulip Museum; The Electric Lady Land Museum, dedicated to fluorescent lamps and managed by the North American artist Nick Paladino, who for the name was inspired by Jimmy Hendrix 1968 LP. The Fluorescent Art Museum is in Tweede Leliedwarstraat 5. And in the border of the district, in Prinsengracht, is Anna Frank’s house, where she hid with her family and four others during the German occupation. The building was turned into a museum against discrimination in May 1960, currently visited by more than a million and a half people yearly.

Jordaan is also known among the Dutch for its songwriters, some of whom, Tante Leen or Manke Nelis, have been honoured with a bronze statue on the corner of Prinsengracht with Elandsgracht. 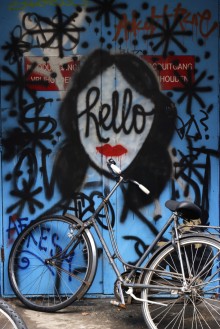 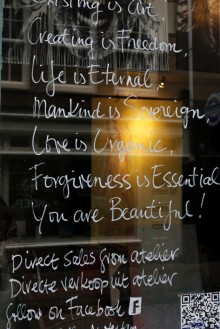