Verona was an important Roman city wrapped in the waters of the river Adige; in the Middle Ages it joined the Lombard League and successive Lordships  turned it into a thriving market town that remained when joined the Republic of Venice. However, it is primarily known for the sad story of two unfortunate lovers. 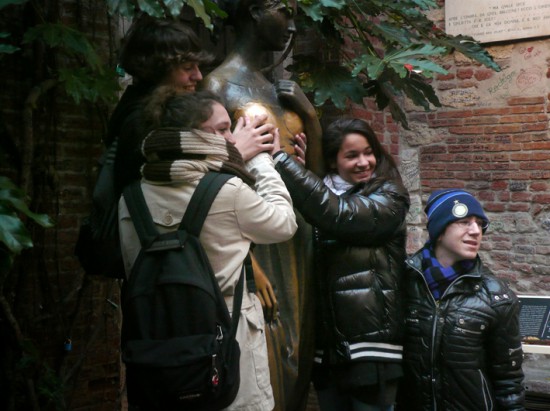 Although there were probably nowhere else than in the pen of English bard. The history of ancient Capulets and Montagues hate could be inspired by the animosity of Guelph and Ghibelline parties in the twelfth century Italy, but the universal imaginary wanted to find tangible references and it has used in the fourteenth century the expulsion of a young Montague, exiled to Mantua by the governor Bartolomeo Della Scala, or identifies the Capulets with the aristocratic family Del Cappelo or Cappeletti.

The story was inspired from classic Xenophon and Ovid works which treated the love theme tragically. In 1476 Masuccio Salernitano included in his Il Novellino a love story without a happy ending that befell in Siena: Mariotto e Giannozza. Half a century later the Vicenza writer Luigi da Porto moved the facts to Verona in his Historia novellamente ritrovata di due nobili amanti con la loro pietosa morte intervenuta già al tempo di Bartolomeo Della Scala. The prolific Italian writer Mateo Bandello wrote his own version in 1554. This later was translated into French in 1559 by Pierre Boaistuau and included in the Histoires tragiques extraites des Ouvres de Bandel, then would be transferred into English in 1562 by Arthur Brooke titling it The Tragical History of Romeus and Juliet. The Bard of Stratford upon Avon, William Shakespeare would borrow the various versions and add some characters becoming in 1597the successful history The Most Excellent and Lamentable Tragedie of Romeo and Juliet. 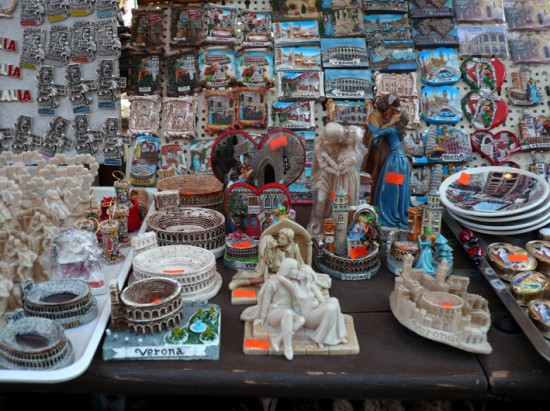 Verona gladly accepted the role given by lovers. Juliet's home was discovered, it was a thirteenth century mansion with a Gothic brick entrance overlooking a mews at number 23 of Via Cappello, near Piazza delle Erbe. The mansion was renovated in the eighteenth century and in 1936 was added the essential balcony where the couple swore eternal love.

In the courtyard seen from the balcony was put on a pedestal a statue of the unfortunate lover, Nereo Constantini 1972 work. Someone introduced the tradition that to finding true love is essential to caress the right breast of the statue. Visitors have taken so literally than Juliet’s bust already must have been reduced in a couple of sizes, regardless that the bronze polished with the usage is considerably brighter than that of the left breast. The ritual is completed with the picture that proves what in other circumstances would be considered sexual abuse. Additionally, those who go with their partners in search of true love may be creating an awkward situation.

The interior of the house can be visited upon payment. It has been decorated as the mansion had to be on their best days with Renaissance furniture, ceramics and costumes. The famous balcony is accessible and from there can be seen the queue of young Romeos trying to access Juliet’s chest. There is no shortage either of juliets hunting for a lesbian snapshot.

Another tradition wants to fill up the house corridor wall with unconditional love messages. Notes stuck with chewing gum which teenagers give a tender heart shape or just barely legible scrawl names. Every February 13 and September 17 each, on the eve of Valentine's Day and the anniversary of Juliet, old messages are removed to make room for future promises. 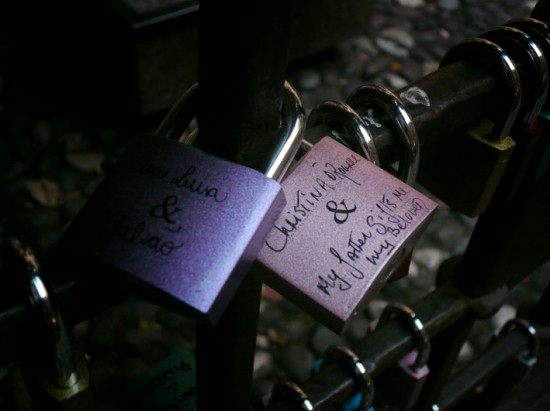 A few lines on a paperback triggered the habit of blocking locks to certify that you are blindly in love with someone. Fashion is about to engulf the bridges over the Seine in Paris. In Verona the managers of the Juliet’s House seem smarter and they provided to lovers a couple of useful panels to attach locks. In the adjacent store locks are available for just eight euros. You can choose even the colour.

Find Romeo’s home has got less success. The honour went to a fourteenth century castellated mansion on 4 Via Arche Scaligere. It belonged to the family Cagnolo-Nogarola and remains privately owned. The only concession to the history of the Veronese affairs is a plaque on the facade in which a young horse seems flee from the city. An inscription reads: O, where is Romeo? Tut, I have lost myself, I am not here; this is not Romeo, he’s some other where.

The tour of this love pilgrimage could lead to an end in the supposed tomb of Juliet, which is in the Capuchin monastery of San Francesco al Corso, currently the Museum of Frescoes at 35 Via del Pontiere. In the nineteenth century red marble sarcophagus was found in orchards and was considered suitable to be her burial place.

Along the walls in Piazza Bra, next to a bust of Shakespeare are noted the words of Romeo when he left Verona:

There is no world without Verona walls

But purgatory, torture, hell itself

And world's exile is death

Nothing that Juliet’s boob doesn’t heal. 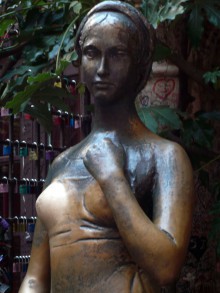 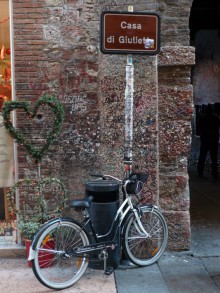