Hampstead Village is an elegant neighbourhood in Camden borough, north London, which also has one of the largest green areas of the City, Hampstead Heath. Residence of wealthy families also attracted artists, painters and poets to found their inspiration here. 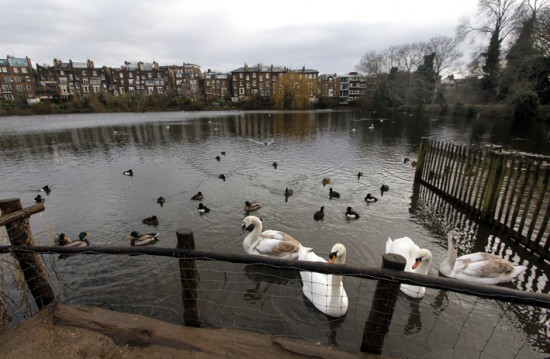 The first news of the place appeared in the year 986 when King Æthelred the Unready decided to give some land to the monks of Westminster. Just a century later, in 1086, the Doomsday Book recorded the value of a farm, Manor of Hamestede: fifty shillings. Along the 1349 and 1665 epidemics of plague turned in shelter to Londoners. But it was not until the eighteenth and nineteenth centuries when Hampstead became fashionable for the quality of its ferruginous waters that were considered medicinal. There were bathing establishments and the first big mansions. There’s also the large area of the Heath, 790 acres of parkland where there are some ponds, the sources of the River Fleet and a privileged view of the city of London from Parliament Hill. There are impressive manors as Mount Vernon House, others are open to the public, such as Kenwood House, in the park near Spaniard's Inn, the famous tavern which is said was frequented by the highwayman Dick Turpin. Kenwood possesses a remarkable collection of seventeenth century Flemish and British painting old masters. Between Hamsptead Grove and Windmill Hill, Fenton House has a large garden excellently maintained featuring its roses and an old orchard farming thirty different species of apple trees, plus a collection of early keyboards. In New End, near where Willow Road begins, lovely Burgh House has transformed the first floor in the neighbourhood history museum, while the ground floor is used for temporary exhibitions and a café occupies the basement.

Numerous celebrities chose Hampstead as their residence place. Near Belsize Park, minimalist apartment block Isokon Building hosted, among others, the sculptor Henry Moore, the architect Walter Gropius and Agatha Christie. Also settled, though temporarily, the romantic writers Lord Byron, Percy B. Shelley and John Keats. As Charles Dickens, Orwell, Stevenson and HG Wells and landscape painter John Constable did. The latter remained forever. Initially in Albion Cottage, then at Lower Terrace, Stamford Lodge, in Downshire Hill and Well Walk. In 1833 he became a founding member of the Hampstead Public Library. Finally rests besides his wife Maria in the old graveyard of Saint John at Hampstead church, where the moss grows on the splines of the centennial slabs, a peaceful place where fancy staying ... but not much more than half an hour if possible. The original church dates from 1312 and its cemetery, where has not been more burials since 1878, is largely intact with Georgian tombstones, among which is also the name of the marine chronometer inventor, John Harrison.

Going up Holy Walk and once left behind the Catholic Church of St. Mary appears The Watch House, where there were the night watch patrols who began their service in the decade of the thirties of the nineteenth century. 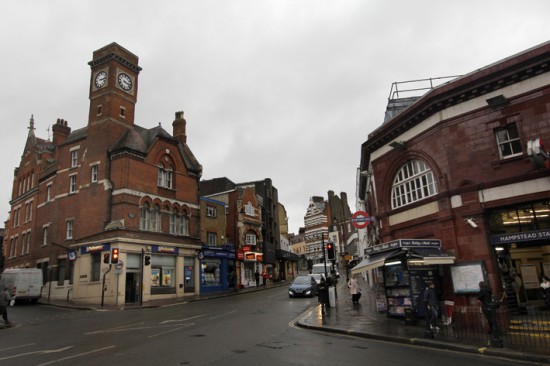 The tube station, the deepest of the city, is in the intersection of High and Heath streets, which further become almost parallel. Here most of the shops are concentrated along some pedestrian alleys where small cafes alternate with antique shops and opportunities. Here are Oriel Place, Perrin's Court and Perrin's Lane. And Bird in Hand Yard. Another peculiar alley is Flask Walk. The name derives from the days when taking the waters became fashionable so it was also bottled and flasks were transported in wagons that were loaded daily to London. On July 29, 1712 issue, was read in the newspaper The Spectator: This is to give notice that Hampstead Fair is to be kept at the Lower Flask tavern walk on Friday the first of August, and holds for four days. A fair would be held until 1748 when it was banned because of its changing reputation, i.e. e from good to bad. In 1854, four years after the opening of the gas streetlights were installed in the passage of Flask Walk a shoemaker, a greengrocer, a grocer, a dairy and a furniture dealer. By the turn of the century were add one pork butcher, a bakery, a tobacconist, a fish, two coffee shops, two hairdressers and a seller of cabinets, maybe the same. Flask Walk boosted.

In the side where Flask widens before returning narrow at the end to became Well Walk, still stands the facade of The Wells and Camden Baths and Wash Houses. Built in 1888 by architect Henry Simpson Legg was funded by Wells and Camden Charity for working families living in the area. A cold bath cost a penny, with two, water was already hot and three pence gave right to soap and towel. Bathrooms closed in 1978. Two years later, in 1980, were transformed into housing. Here the houses were modest, despite prices that can reach today in Lime Tree Terrace or Rock Cottages.

Very close to the pub, The Flask, a wealthy punks, the Sex Pistols, composed in 1977 their anthem God Save the Queen in the house where born bandleader John Simon Ritchie, better known as Sid Vicious.

At the other end Flask Walk leads to Christchurch Hill and Willow Road, where among the elegant residential buildings is noted for its modern style the one in the number 2, designed in 1939 by architect Ernö Goldfinger, who also gave name in one episode to the evil James Bond nemesis when he was played by Sean Connery.

In the lower side of Hamsptead Heath Park, lived the Romantic poet John Keats. Provisionally stayed at Well Walk No. 1, where he wrote one of his first works: Endymion. When in December 1818 his brother died due to tuberculosis, the poet moved to one of the two adjacent houses at Wentworth Place, near Downshire Hill, owned by his friend Charles Armitage Brown. In April 1819 settled in the neighbouring house the Brawne family, whose 18 year old daughter, Fanny, would fall in love. Keats saw her for the last time in September 1820. His house, now a weekend museum that opens from Friday to Sunday, is located at the beginning of what was then called John Street, Keats Grove today. While staying at home before traveling to Rome where he would die due to tuberculosis on February 23, 1821 at 26 years of age, Keats spent his most creative days. Between April and May 1819 he composed five of his six great odes, among them the Ode to a Nightingale as his friend, Brown, said he drafted in the garden of the house, under a plum tree:

My heart aches, and a drowsy numbness pains
My sense, as though of hemlock I had drunk,
Or emptied some dull opiate to the drains 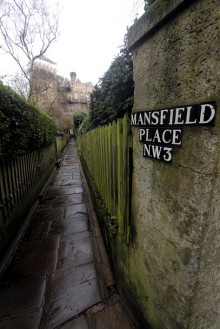