Homepage > Milan or X-ray of a memory (Updated)

Milan or X-ray of a memory (Updated)

…memories are life pieces teared from the void. Nothing ties them. Nothing anchors, nothing fixed. Virtually nothing ratifies them.

This is an old x-ray film, should be about thirty years or even more. Backlight examining it some gaps are clearly observed. In fact is what prevails. As time goes by the image is markedly deteriorated. 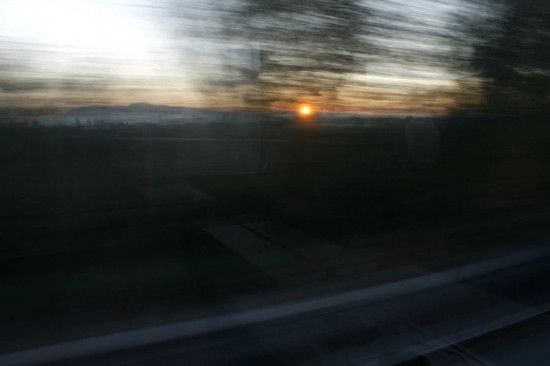 (1982) Recently dawned when the train on the way to Milan and coming from Zurich crossed the Swiss-Italian border between Lugano and Como. A clairvoyant carabinieri concluded that a couple of young backpackers loaded also with a gym bag would be surely dealing currency from one to another country. Was hard to convince him a green thousand Spanish pesetas note, although for us it was a pulp at the time, was the total amount of our assembled capitals after a month touring Europe. As just mentioned he was clairvoyant, so insisted on finding any evidence of the bulk of fortune we were carrying. The inspection was proving unsuccessful inside both backpacks. Noting that the handbag also belonged to us is his eyes lit up. Tensing his face formed a fledgling smirk under his nose. As Sméagol with the One Ring he was about to proclaim that there was his treasure. We confessed really belonged to us and we put him on advice we use it basically to carry a small camping stove and all the filth that we had not yet thrown away by the window. That included a plastic bottle of shower gel that had blown several days ago, turning the bag inside a tangle of sticky dirt. Even today I wonder why we loaded up and down with such crap. But the wily carabinieri persisted in his pressing need to find out something in our belongings enough to fine us.

We obeyed his orders and he get in entirely his forearm inside the bag. In a few moments his face suspiciously transmuted the tense smile on a new expression, this time manifest revulsion perceptible from the distance. We guessed at once that he had just found what was left of the gel bottle probably mixed with some banana peel or any other fruit remaining. He pulled his now sticky hand out from the bag and gave done the inspection. Something really convinced him we’re not dealing currency, even in spite our will. Although we already knew that after a day without eating hardly anything, in my case at this point I must have lost about fifteen pounds, what converted me in a kind of walking noodle. The memory of the arrival in Milan is wrapped in a clear sensation of hunger. Once left the train we headed straight to the station bar. We exchanged our currency stash in a ten thousand lire note, which in turn, immediately mutate into a couple of small pizzas and two glasses of draft beer. As soon as the waiter had placed the succulent dish on the bar in front of us turned to go for beers. The pizzas generously smoked, indicating that they were burning inside. The waiter turned again to serve the beer while surprised warned the pizzas were vanished. The smoke that previously emerged from them now exited from our ears while we were wildly swallowed. We were hungry. The fire between the tongue and the palate was quenched with beers.

Returning to radiography and its deplorable state, after arrival at the station before reaching Piazza dil Duomo, in the heart of the city, we had to walk a few streets, namely the equivalent of the four subway stations that separate: Repubblica, Turati, Montenapoleone and Duomo. The path corresponds to a void. For years the main memories I have kept has been covered galleries and not even cathedral itself. Also about gardens I can not say whether they were close to the station or are, more likely, close to Castello Sforzesco.

(1996) I returned to Milan twice the same year with a few months of difference, both of the way to Ancona without further opportunity to explore the monumental Centrale station...neither longer history to explain.

(2011) ...So I write these lines from the train, sitting comfortably in a Frecciabianca going to Milano Centrale Station. I return to Milan to try to recover those gaps, perhaps to try to look for where were them lost, if they remained in the same place. This time I sought physical coordinates, as a navigator places the pilot, to compare two isotopic presences and experiences, properly weighting visual angle to make my own parallel existences comparable. Ergo I’ve got to try to place myself in the exact spot of the Piazza dil Duomo where I left my memories, a place where the perspective between the galleries entrance arch and Duomo facade was consistent, as the turning point where an experience is repeated materially with a three decades lapse. 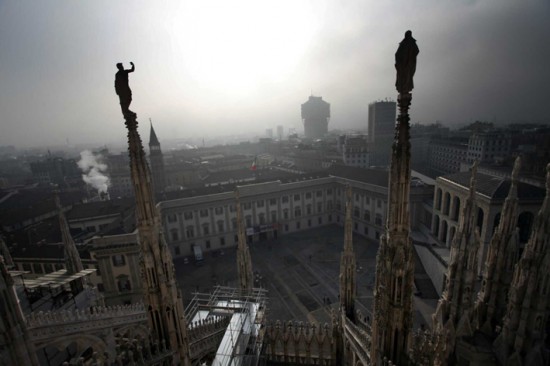 Vittorio Emmanuelle Galleries, one of the oldest shopping malls in the world, began building in 1867 from the design of Giuseppe Mangoni, are also famous, obviously apart from its luxury shops, for the mosaic representing a bull in the central floor which all self-respecting tourist must tread down firmly onto its attributes. Seems as to not have been in Milan whether the unfortunate ox hasn’t been properly kicked twisting at least for three times. But still stands. Also the Duomo. First stone was put in 1386 and the latter in the mid-twentieth century, the January 6, 1965, when the last door was opened up. I just saw the facade in my memories. Much less inside. Probably I didn’t enter. I think I would have remembered Apostle St. Bartholomew statue, which is shown flayed without its skin, as fresh as he only had used devoid of a camisole, rising above its pedestal near the window of the cathedral southern entrance.

Much less I remember having gone to the roof from where, on a clear day, the Alps are looming. It is easier to count the innumerable, over two thousand three hundred statues that decorate the pinnacles under the watchful eye of the Madonnina, the gilded copper statue of the Virgin, who chairs the group from three hundred and thirty feet high, in the heavens of the Lombard capital. When Pirelli built its skyscraper surpassing the pinnacle of the Duomo placed a replica of the Madonnina statue as an apology upward. Just in case.

Neither had I recalled - another gap in the radiography -, the access to Sforzesco Castle: the Mercati, Piazza Cordusio and Via Dante. But I did in a more or less accurate way from Parque Sempione between the castle and the Arco della Pace.

This time I’ve taken pictures. They will be more useful than my radiographic film memories. Also I’ll add some notes. Just in case.

(2012) I'll be back to properly check the coordinates which seemed not enough accurate or reliable. Last year Vittorio Emmanuelle II equestrian statue, a necessary reference point was covered for restoration. Once uncovered is a valuable new parameter to set memories position. The columns of the portico area, the statue, the Duomo’s facade and the galleries could become at 45º27’52.30” latitude and 9º11’20.99” east longitude vectors.

But new journeys generate new memories to place carefully in the brain. This time I bother to take the subway to reach the Navigli, the once navigable channels that now are a boosting nightlife area. I also walked around Brera, a relaxed neighbourhood full of restaurants that extends behind the Palace of the Scala and where is the Pinacoteca. Leonardo looks in that direction.

Back in the square, under the glowing golden Madonnina shine, a Chinese groom and her bride hop off from a big white limousine. The couple is properly dressed for the ceremony, but for now only concerned with the pictures, perhaps they also want to generate their own memories for in a distant future show their grandchildren the car they once hired. 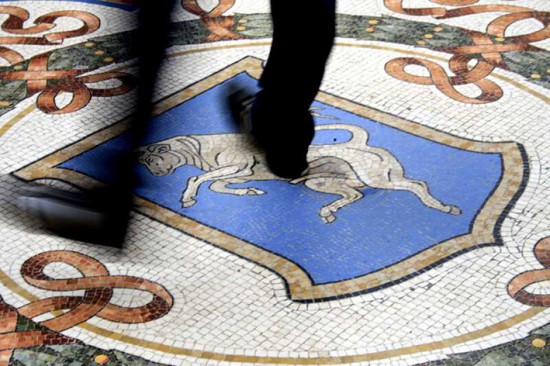 All the action scrolls in front of my eyes. I’m properly seated in the first row at one of, probably, most expensive coffees in the square. But I must admit that the site is unbeatable to gaze once again my own past, present and future memories sharing them with a dry Martini, quite adequate to prevent them.

Despite accurately set the exact position of my old memories, indeed, next to a trash bin, never ceases to amaze its volubility, as they have come, over time, to compress space, bringing the Centrale station beside the yard near the Sforzesco Castle.

Interestingly distorted in the same way as a first stay in Dublin, in 1986, where inextricably my memories linked the Trinity College yard to the river Liffey just at the foot of the Ha'penny bridge. An impressive compression which avoids at least four whole crossings.

What I did better remembered, in Milan, were precisely the galleries, where now tourists enjoy treading the bull mosaic. It have been rebuilt the tiles corresponding to the testicles, where visitors recreate sadistically kicking while turning on their heels and portray. It must hurt. In the Centrale station in the lobby to the beach train, there’s another mosaic of a very similar bull. Watching it is immediately perceived its attributes enjoy a more relaxed existence.

(2015) After a new visit, I realized, not with memory but with logic, that 1982 vacuum corresponding to the arrival in the city has its explanation: it never happened as it’s reported. For a small detail. If the memory of the station and the pizza and beer is intimately related to the Sempione Park is for an obvious reason and in which I had not noticed when I recalled the route: from Lugano we did not arrive to Milano Centrale but to the station Milano Nord Cadorna, which is effectively closer.

(2017) I have taken a new glance at Vittorio Emmanuelle Galleries bull bollocks. The tradition seems to have no end and a recent repair in its noble parts is notorious, they have replaced the corresponding tesserae with cement hollow which will prevent further mustering spares. An operation that has turned the bull into someone close to that famous opera singer who acted a few steps away, at the Teatro alla Scala in 1726, Carlo Broschi, nicknamed Farinelli. 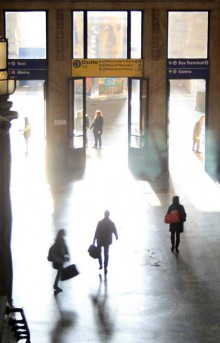 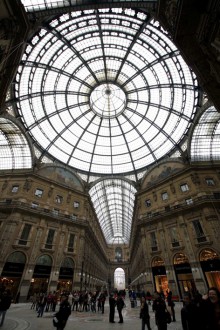 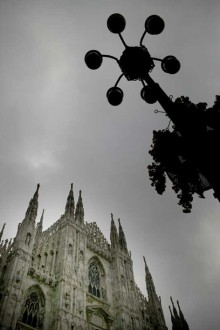