The city of Niebla, halfway between the counties of El Condado and Andévalo, on the road from Seville to Huelva, is about thirty kilometres from the latter and lies along the banks of the Rio Tinto that once, when it was called Luxia, was navigable up to the city. Niebla preserved in a pretty good condition an admirable walls ring which completely encloses the old town. 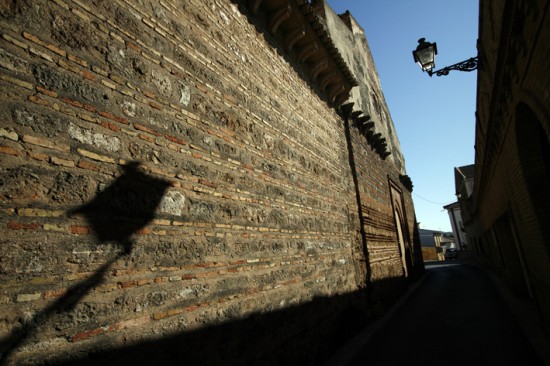 Niebla was, with some variations, the Tartessos Ilipula, Roman Ilipla and Visigoth Elepla. Upon Muslim disembarking became Labla al Hamra, a Cora (province) centre in the Umayyad days which covered virtually the present province of Huelva and the smaller towns of Awnaba (Huelva), Aljabal (Almonte, literally) or Jabal al Uyum (Gibraleón). In 1023, with the Caliphate’s collapse, the Cora was divided into two Taifa kingdoms, that of Huelva and Niebla. Yahsubí Dynasty, with Abu al Abbas Ahmad ben Yahya, took power entrenched in the hisn, the Alcazaba stronghold attached to the walls.

The Taifa was autonomous along fifty years when it ended up being absorbed by Seville. After the years of Almoravid rule a second Taifa appeared but barely resisted five years, between 1145 and 1150, governed by Yusuf al Bitruyí. When Almohad Empire disintegrated in 1234 a third Taifa was formed ruled by Ibn Mahfut. This spread its influence all over the current Portuguese Algarve since 1253 but became a vassal of the Castilian king Alfonso X, who eventually occupied the city nine years later inaugurating the use of gunpowder as a weapon in the West, i.e. artillery. 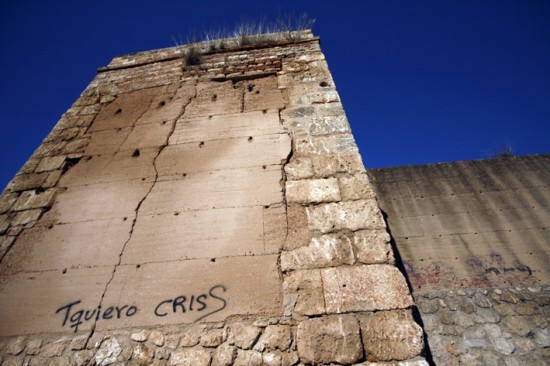 The splendid city walls, whose foundations were tartessos origin, were expanded and strengthened during the Almoravid rule, around 1130. Walls and towers defended a perimeter of almost one mile and a half with a height that reaches up to fifty two feet high and had forty-eight square towers and two of octagonal base. Most of the perimeter can be easily walked. Access to the medina was done through five gateways still very well preserved with entry in bend, it means to cross two thresholds placed perpendicularly so, whoever go inside, necessarily expose a helpless flank. The A-472 road passes by in front of two of them, the Socorro Gate, named for a Virgen del Socorro fresco painted inside one of the tower walls. It is said that this one was the gateway crossed by King Alfonso X the Wise when he conquered the city.

Short distance eastwards it’s the Hole Gate which profits an old archway from the ancient Roman citadel where a stone staircase that provides access to the street of the suburb has been recently added. Alongside Egurrola Ortega Street is Seville Gate, which obviously indicates the direction pointed from there. Between this and the Water Gate was once the Embarcadero or Jetty Gate, now collapsed and that gave access to the Rio Tinto River. To the south is the Water door in Almohad style, also near the river but probably the name comes from the water that was supplied to the city from this point.

Finally, the Ox Gate, also facing south gets its name from an alleged ruse that managed Ibn Mahfut during Alfonso X Christian siege, letting out an ox to make believe the besiegers there was no shortage of food in the city.

Between Seville and Socorro gates lies the Alcazaba, town fortified core and emir’s palace residence, first to the representatives of the Caliphate and later of the Taifa during Al Andalus days. Was named Castle of Guzman after the conquest. The fourth count of Niebla, Enrique de Guzman demolished the oldest part in 1402 leaving Andalusian build dependencies and rebuilding the main tower that even should suffer the effects of the 1755 earthquake that would hit the south of the peninsula from Lisbon to Andalusian coast and the damage caused by the French army during the War of Independence in 1812. 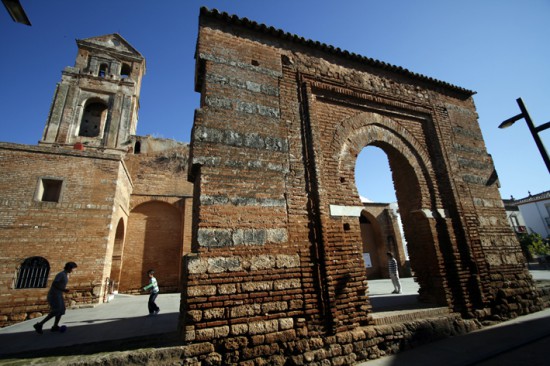 In Labla al Hamra officiated at least two mosques. The main mosque that got between five and six runners and that after the conquest was transformed into the church of Santa Maria de la Granada. The arcade was demolished modifying the three Mudejar naves. Still retains some walls of the mihrab and minaret was converted into a bell tower. Some of the columns recall that in its origins it was a Roman temple and later a Byzantine church. But the most remarkable is the pretty small courtyard of orange trees, which was before the ablutions courtyard, annex to the temple through a beautiful lobed arched doorway.

The smaller mosque was a synagogue before becoming finally the church of St. Martin. In 1921 it was split in two to open the street to traffic. On one side was the facade and in the other the apse and chapel. There’s still an outstanding horseshoe arch framed in a rectangular alfiz, now it feels to be a door that leads nowhere.

In the square of the Fair, in its sunny centre, a deep white statue representing the last emir of the Taifa of Niebla and the Algarve between 631 and 670 of the Hegira. Looks toward the river, to the Embarcadero gate that no longer exists. 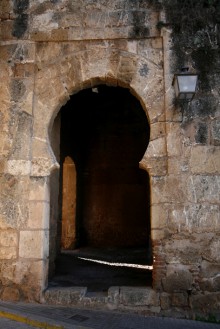 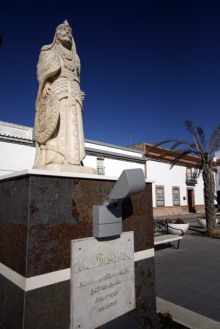