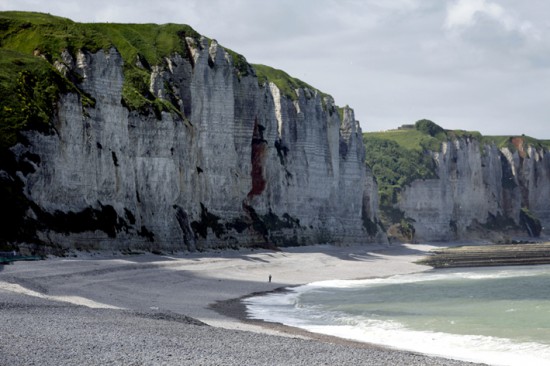 Between Le Havre and Trouville walked the Dutch painter Johan Barthold Jongkind, who became interested in draw outdoor notes and sketches for his landscapes which later would finish in the studio. Jongkind befriended in the Normandy coast with other young painters as Eugene Boudin and Claude Monet. Years later Monet would say about Jongkind: c’est a lui que je dois l’education définitive de mon oeil. (It’s to him whom I owe the definitive education of my eye). They shared a certain conceptual interests: the lure of the light and the evolution of its nuances, working outdoors and a passion for an almost photographic snapshot.

Boudin was born in Honfleur, a picturesque fishing port of Calvados coast at the mouth of the Seine which was beginning to attract an emerging tourism from the French capital. Boudin in Le Havre met some local artists as Jean-François Millet, a native of Gréville, near Cherbourg, who encouraged him to develop his hobby. Admirer of seascapes sometimes moved across the French northern coast of Brittany and Picardy, although logically, work with greater assiduity in Normandy. In 1857 he met Claude Monet with whom, in the beginning of his career, he worked a few months together. A watercolour by Boudin, 1867, A la ferme de Saint-Simeon, portrays four artists sitting at a table: Jongkind, Van Marken, Monet and Amédée Achard. Precisely because of their themes and the resolution of them, Boudin is considered a pre-impressionist, although he never defined himself as such. There are many works he made in his hometown and the surrounding with recurring themes such as the lighthouse, the harbour and Étretat beaches and cliffs. Honfleur will end up honouring him with a museum.

Claude Monet also spent some canvases to the abrupt Côte d'Albâtre, the Alabaster coast, in Étretat he portrayed in different weather conditions the cliffs and the steep coast shapes. Other artists followed, Pissarro recorded his seascapes in the port of Dieppe, Sisley, made repeated paints of Port Marly as a single subject, as it did Monet with Rouen Cathedral, which portrayed about thirty times between 1892 and 1893 trying to capture the subtleties of evanescent, fleeting lighting. 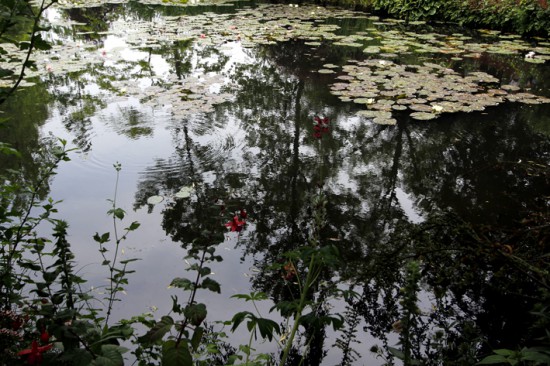 The new pictorial current was named after the 1874 exhibition in the photographer Nadar hall, with the participation of 39 artists who submitted 175 works. Critics labelled them impressionists for a Monet’s work made in the port of Le Havre, Impression, le soleil levant. Monet himself told: On me demande le titre pour le catalogue, ça ne pouvait vraiment pas passer pour une vue du Havre ; je respondis : Mettez Impression. (They asked me a title for the catalogue, I could not pass it as a view of Le Havre, so I said: Put Impression.)

The coast frequented by those Impressionists is still there, the same stunning white chalk cliffs that run along the coast of the Pays de Caux, in Upper Normandy. Fécamp, old cod fishing harbour sending their fleet to Newfoundland fisheries, conserves numerous testimonies of its past starting from the monument to the deceased sailors. This is on the grounds of an old cemetery which now become a small garden. When the graveyard was moved was left here this curious modernist monolith supported by four Viking ships prows. In what once was the core of the town are the remains of the Ducal Palace built by early Norman dukes and where William the Conqueror celebrated their victory at Hastings. When was raised was already there Sainte Trinité abbey church, whose first building was founded by Duke Waninge during the reign of Clotaire III in Neustria in the seventh century. There is kept in a reliquary a drop of the blood of Christ they say came floating on the trunk of a fig tree. Like so many others suffered the ravages of Vikings visits and was later rebuilt. Opposite, the Hôtel du Grand Cerf today houses the Maison du Patrimoine and the archives. This half-timbered mansion was acquired by the Fécamp monks to its owner, Nicolas Lecerf, for three thousand pounds and one hundred fifty litres of wine. At the other end of the village, within walking distance of the harbour and the beach, is the singular Benedictine distillery building, an incredible mix of styles that tried to link the aesthetics of monks abbeys who elaborated digestive distillates with Flamboyant Gothic elements, Renaissance stairs and Norman architecture.

Continuing in a westerly direction, Étretat is the scene of some famous canvas: Étretat, barques échouées sur la plage by Boudin, Grosse mer a Étretat or La Porte d’Amont, Étretat by Monet. In fact on the terrasse Maurice Leblanc, name of the boardwalk along the beach some plates indicate the precise point from which Monet painted in 1885 the great arches that close the beach, the Porte d'Amont and the Porte d'Aval, the latter accompanied by a calcareous needle which emerges from the water and has resisted the erosion. It is the Aiguille d'Étretat, 230 feet high. Courbet and Boudin also succumbed to the charm of this same landscape and took it to their own canvases.

The Côte d'Albâtre becomes the Côte Fleurie once the Seine is left behind. Today crossed by the great bridge of Normandy in the next shore is the birthplace of Eugène Boudin, Honfleur. Honfleur, that of St. Catherine Square, where the church has a wooden steeple separated from the nave because the roof, also wooden, did not have to endure even the weight and vibration of the bells. Both this and the harbour and the lighthouse were an inspiration to the Impressionists. And above all the reflections that water returns to the curious glances in the languid sunsets along the Vieux Bassin, the inner harbour, almost completely surrounded by restaurants terraces. La jetée de Honfleur,  by Alexandre Dubourg, L’entrée du port, by Paul Rossert and Charles Mozin, Jongkind, Boudin and Monet multiple canvases attest it.

Also their streets as in Rue de l'Homme de Bois Pierre Barthelot birthplace,  who was not a painter but a pilot and cosmographer who put their skills to the service of the King of Portugal until he ended his days in Sumatra in 1638. In the parallel rue Haute also born humorist Alphonse Allais in 1854, the centenary of his death was created an alley with his name, Allée Allais, with the decoy Allez allée Allais in a posthumous pun that sounds something like : go, go, go!

In Honfleur also breathes that whole atmosphere through the extraordinary number of art galleries that open their doors daily in town, probably more so during the temperate summer weekends when Parisian, Caen or Rouen vacationers flock in searching for the presence of the sea. And in between can not miss the souvenir shops and products of the country as the Calvados and cider and the famous regional cheeses: Camembert, Pont l'Eveque, Livarot ... 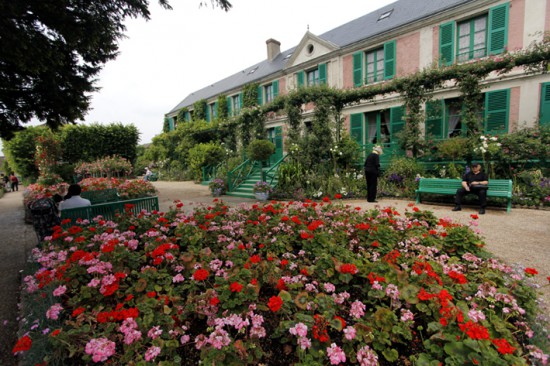 Halfway to these Norman shores and the great city, Paris, Claude Monet, already recognized, chose a quiet corner of the Seine where to live: Giverny. He established his studio in the house where today visitors buy souvenirs and pay the ticket entrance, and built a garden with an extraordinary variety of flowers that served as models for his works, here bloom daffodils, pansies and tulips with poppies and lilies. There dahlias and nasturtiums, cherry trees and climbing roses. The Jardin d'Eau, is the area of ​​the pond with water lilies and the Japanese bridge. Here, Monet, took up the study of reflexes and discovered three objects of interest in them: reflecting surface and what it contains in it, the bottom that are beyond and the own reflection and what it projects, sometimes elements that remain outside the framework, all subtly nuanced in the brightness of scenes, in the spell of the mirrors. 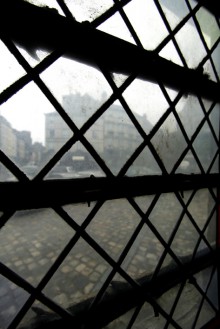 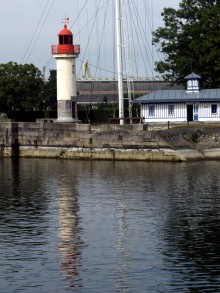