According to legend, Rome was founded by the twins Romulus and Remus 754 years before our era. Raised by a she-wolf they would establish between seven hills what would become Caput Mundi, the capital of the world.

Roma started to become a city on the seventh century BC when the Etruscan Tarquin dynasty dried the valley between the Palatine and Capitoline hills, built a temple to Jupiter on the latter and built an early wall with a moat to protect the town. The Etruscan dynasty disappeared two centuries later replaced by the Republic and the expansion of the territories controlled by Rome in the Italian peninsula.

In times of Julius Caesar was already consolidated the Roman Forum and the Circus Maximus. Today, the Forum, or better forums as the site were expanding and new buildings were attached to the glory of the emperors, can be seen in its entirety from the slopes of the Capitoline Hill. Left, tirelessly traffic flows in both directions of the Via di Fori Imperiali, as if it were a new and modern Via Sacra, the Forum axis. This runs parallel to the right, as seen from the hill. At foreground stands the Temple of Saturn. Thirteen tons of gold, one hundred and fourteen of silver and thirty million coins, the Republic’s treasure were here safeguarded. There are still eight columns supporting the frieze. Practically beside the Arch of Septimius Severus which commemorated his victories against the Parthians in Mesopotamia and Arabia. It was erected in the year 203.

The Via Sacra just ends in front the Temple of Saturn but shortly before it passes by the column of Foca, the Byzantine emperor. It was one of the last monuments added to the forum and this occurred in the year 608. Opposite is what remains of the Basilica Iulia, begun in the time of Caesar and finished by Augustus, then was the seat of civil law whose justice was given in four courts. Left behind the Basilica are the temples of Castor and Pollux and the Temple of Vesta. This was round and sustained its roof with twenty pillars. It was dedicated to the cult of the Vestal Virgins who kept lit a sacred flame. Opposite is the Ara Caesar, where he was cremated after being murdered. A few meters away stood the house of the Vestal Virgins and the Temple of Antoninus and Faustina which became the atrium of the church of San Lorenzo in Miranda. Besides, the Temple of Romulus retains its original bronze doors. This was also transformed into a church dedicated to the Saints Cosmas and Damian. The Basilica of Maxentius and Constantine, largest building in the forums, have three large domes that once were a space of trade and justice. 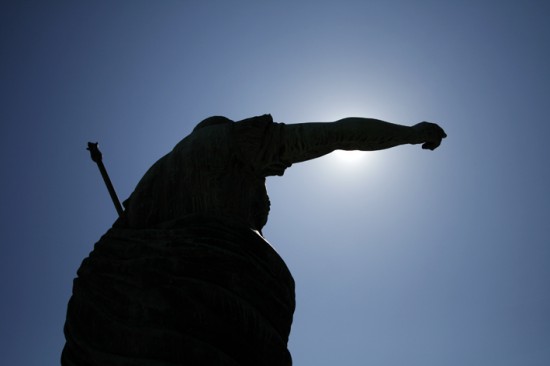 The Via Sacra ends, in this part of the forum, on the Arch of Titus, built in 81 by his brother Domitian to commemorate the victory over the Jews. In the bow is sculpted the booty obtained in Jerusalem. New forums expanded the ancient Roman Forum and Caesar’s. Northwards Trajan ordered to his architect Apollodorus of Damascus the construction of a large complex of markets that housed over one hundred fifty shops and offices responsible for the distribution of wheat. The complex worked as a modern mall. Near the emperor had erected a column to celebrate his victorious campaigns in Dacia. The column reaches 98 feet high and has a coil frieze carved up that chronicles the development of events. The statue of the emperor was at the top but was replaced in 1587 by another representing Saint Peter. Southwards Forum, where today is the piazza della Bocca della Verità, existed the Forum Boarium basically dedicated to the cattle market. Here still stand some buildings in an exceptional state of preservation: the Arch of Janus, the Temple of Portunus and the round Temple of Hercules, recalling the structure of that of Vesta.

Northwest, close to Largo di Torre Argentina, was discovered in the twenties of the last century a large space that would have been four temples of the Republican era. A platform has been identified as part of the Curia of Pompey where was the Senate and where Julius Caesar was assassinated.

Caesar's successor, his adopted son Augustus, built a monumental sundial, now disappeared which employed an Egyptian obelisk as gnomon. The obelisk is the one now stands in Piazza Montecitorio. Augustus also built the Ara Pacis, a monumental altar commemorating the pacification of the empire after the campaigns of Hispania and Gaul. The surfaces of the Carrara marble walls that surround it have carved figures of characters next to the emperor during a procession. The Emperor remains were interred in the Great Mausoleum of Augustus, a circular enclosure of 295 feet in diameter. It was adorned with two Egyptian obelisks that now stand in the Quirinal and Esquiline squares. The mausoleum is nowadays in a remarkable state of neglect. The nephew of Augustus, Marcello, died prematurely at age nineteen and was buried there before his uncle. Augustus dedicated him the great theatre, the Teatro Marcello, along the Tiber River. Eventually it was converted into a fortress and palace to end virtually abandoned. Its lower floors were occupied by workshops and slums. 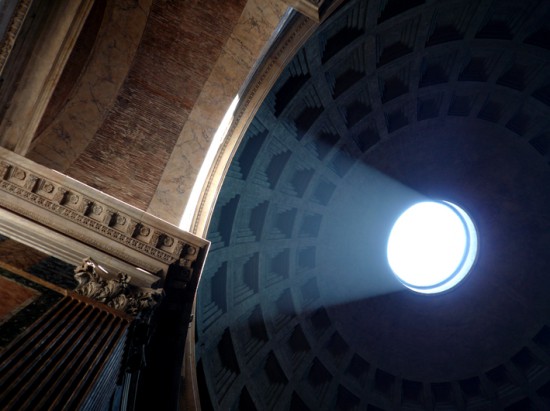 One of Augustus lieutenants, Marcus Agrippa, took care of some buildings that were erected in the Campus Martius, north of the city, which has endured the Pantheon, but was considerably changed as soon as in the year 125, in days of emperor Hadrian. In fact the porch was built on the foundations of the ancient temple. The interior is amazing, the huge dome of 142 feet, both height and width, is topped by a thirty feet in diameter oculus that provides illumination to the temple. The circle of light runs along the day by the wall of the dome. Here are buried the Renaissance painter and architect Raphael of Urbino, under a statue of the Madonna of Lorenzetto, and King Victor Emmanuel II. Nearby is the piazza Colonna where, in the second century, was raised the Column of Marcus Aurelius, now crowned by a statue of St. Paul, celebrating the victory of Emperor against Germans and Sarmatians on the Danube.

In the early third century Rome had already reached one million inhabitants. In 271, the walls had significantly expanded the defended perimeter and urban growth was increasing. In addition to the competitions held in the Circus Maximus the populace flocked to witness the performances of the Flavian Amphitheatre, the Colosseum and bathed and relaxed in the public spas of Trajan or Diocletian. In the Circus Maximus were run the horse and the chariot competitions. The great stadium was the largest in the Empire with about a half mile in length and could accommodate up to two hundred fifty thousand spectators. Now there are just remnants of the southern part of the curve and the spina separating the circuit. Other performances were held in amphitheatres and the Colosseum is the greatest expression. The name comes from a monumental statue of Nero that was on the outside, and because of its size was known as the Colossus. The real name is Flavian Amphitheatre, the emperors Dynasty who built it. His works were finished in 80 by Titus, Vespasian's son. Its bleachers could sit fifty thousand people who came to witness battles between gladiators and wild beasts brought from Africa and Asia. In its galleries and underground tunnels was managed as if it were choreographed the appearance of animals, slaves and fighters to the arena. Outside the Arch of Constantine stands in memory of the battle of the Milvian Bridge, this won Constantine the Great, in October 312, marking the end of the first Tetrarchy.

Public baths were numerous in the capital of the world. In the third century the emperor Diocletian ordered the construction of which would be the largest baths of Rome. The Baths of Diocletian, with capacity for three thousand users and were in operation until the year 537. Part of the large complex was reused by Christian churches, the Basilica of Santa Maria degli Angeli e dei Martiri and San Bernardo alle Terme. The National Roman Museum contains a small portion of the facilities and statues and stela of the time.

About the Circus Maximus, the Palatine Hill was the space chosen by the emperors to establish their mansions, in some cases with views and access to the rostrum. Augustus lived in the house known as Livia’s House, his wife, a modest house for the first emperor of Rome that still retains some of its murals. But his successors did not share its simplicity and chose to stay in new and sumptuous palaces. The Septimius Severus included their own baths and next to this was the Palatine Stadium or Hippodrome of Domitian.

The walls of the ancient metropolis still remain important fragments and some gateways. Beside San Paolo Gate is a curious pyramid, is the Pyramid of Caius Cestius, a wealthy magistrate who wanted to be buried like a pharaoh in 12 BC. Three centuries later the pyramid was used to reinforce the Aurelian Walls that would defend the Caput Mundi, the world’s capital, even for two centuries, until Eternal Rome reached the ruin with the dismissal of the last western emperor, Romulus Augustus, by the Germanic chieftain Odoacer.