On the leaves of grass still covered with dew a glance looks to the rusty surface of the stone. Following up the porous granite skin striations to find an incontestable crack that splits two cyclopean blocks. The one vertically growing is interrupted by another tracing a different path. Rests horizontally on a third block forming a trilithon. Dawn on the summer solstice bends the colour of the light and draw an invisible line between the dolmen and a menhir not too far. All the way round the effect is repeated on 21 December, on winter solstice. 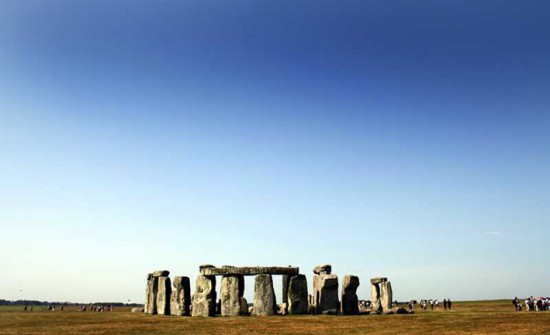 A few meters away indifferent cars rolls on the A303 motorway, linking London to the West Country and the A344, forming a triangle that surrounds the famous stone circle, the most important and spectacular megalithic ensemble in Europe: Stonehenge. Nobody knows for sure why the enormous volumes of stones were dragged. Smallest, weighting forty tons, came from Marlborough Downs, 18 miles away, and the called bluestones from the Preseli Hills, over one hundred fifty miles west in Wales.

The first written references to Stonehenge are found in Henry Huntington’s Historia Anglorum and in Geoffrey of Monmouth’s History of the Kings of Britain, both from twelfth century. The latter considers the Wiltshire megalithic circle was a monument raised to commemorate an ancient battle between Saxons and Britons and transported from Ireland by the magician Merlin. In the Roman de Brut manuscript by Norman poet Wace there’s an illustration, the oldest depicting Stonehenge, showing a giant joining the trilithons. Along Romanticism the place was linked, as many other megalithic sites, to the cults of the Celtic Druids, as William Stukeley wrote in Stonehenge, a temple restor’d to the British Druids, published in London in 1740. Stukeley, fan of any history with Celtic overtones, did not hesitate to disguise himself in druid just to be portrayed in the engravings of the time.

While it is true that in many of the areas where Celtic tribes settled megalithic ensembles were present albeit preceding in centuries before them. Stonehenge is far from to be the only huge Neolithic place in Western Europe. From southern Scandinavia to northern Tunisia, the Continent is besprent by ensembles of different types and attributed with different functions. The decline of the nomadic societies of hunter gatherers and the rise of sedentary related to agriculture and livestock opened this development of the concept of territoriality. From stone circles, more than a thousand of them are known which have got  the role of temples in relation to astronomical cycles, spread throughout Europe massive tombstones and graves, menhirs and dolmens, funerary in many cases. At Avebury, in county Wiltshire, near Stonehenge, there are complex groups of burials. To the southwest, in Cornwall, abound graves formed by dolmens and stone portals. Trethevy Quoit, Zennor Quoit and Chun Quoit or stone circles as the Merry Maidens, near Penzance, or Bodmin Moor. In neighbouring Ireland, north of Dublin in County Meath are concentrated Brú na Bóinne burials, where Newgrange, one of the largest with its 280 feet in diameter and 36 in height, has been properly restored and gives a rough idea about how it should be when they were built. Nearby are other similar mounds: Dowth and Knowth. On the west coast near Sligo, Carrowmore hosts the largest megalithic cemetery in the country where the tomb is supposedly dedicated to the legendary Queen Mebth of Connaught. Also within walking distance from Sligo is Creevykeel cairn, one of which has been preserved in better condition. Further south, in the region of the Burren, is Poulnabrone dolmen, where a 1985 excavation in 1985 uncovered the skeletons of a dozen adults and six children, axes and ceramics from the Bronze Age.

Far to the north, Shetlands Islands are riddled of settlements remains testifying human presence in the Neolithic. Stanydale is one of the most representative in West Mainland. Here was a farming community between 3000 and 2000 BC, and their presence is obvious in the ruins of several houses and a central building by its plotting plant suggesting temple functions. Two holes reinforced by side slabs should contain separate base columns that would support a wooden roof. On the hilltops around Stanydale there are numerous burials from the same days. In the region, Scord of Brousta excavation discovered another contemporary farm. There are still the stones covering a passage chamber burial. 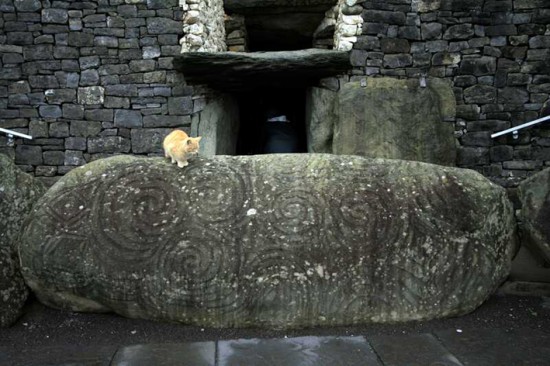 On the way back southwards between Great Britain and Ireland, Isle of Man is not devoid of megalithic ensembles. Near the town of Laxey is the supposed King Orry’s grave. Also known as Godred Crovan, was an Irish king at the end of the eleventh century, and according to the Cronica Regum Mannie et Insularum defeated twice in Man until in a third and last attempt took control over the Hebrides. But legend does not match because the tomb was built some three thousand years before Christ, made up of three chambers and associated funerary cairn. The set is split by a road leading to a couple of houses. The circle of Mull, from late Neolithic, form an extraordinary half-dozen graves in the eponymous hilltop with spectacular views over Port Erinn’s bay. In the parish of Marrow, near the main city of Douglas, is an monumental place called The Braaid: here there are the remains of two Viking buildings and much earlier megalithic circle remarkably preserved.

On the other coast, in southern Wales and the Gower Peninsula, are the remains of half restored Parc Le Breos great chamber, probably built more than four thousand years ago and surrounded by Green Cwm forest. It was identified as such in 1869 when landowner Henry Hussey workers, at the time future first Baron of Swansea, found human skeletons. The site was partially excavated and the results of research published in the Journal of the Ethnological Society. Along the central passage is clearly visible four side chambers designed to house the dead. Further north, in the Pembrokeshire National Park, on either side of the A487 road between Newport and Eglwyswrw stand the dolmens once were the entries for both monuments. In a suburb on the outskirts of Newport is Carreg Coetan, a dolmen also known as King Arthur’s seat. A few kilometres away, Pentre Ifan surpasses it in size. Supported by three blocks arranged vertically, the lintel, about fifteen feet, is estimated to weigh about sixteen tons.

In Anglesey, the island in the northwest Welsh, two large burial mounds recall the Irish Newgrange design. Bryn Celli Ddu, the Mound of the Dark Forest, nowadays without forest, dating from the late Neolithic was built in two stages. From the first period conserve the outer circle of stones, and in a second stage a chamber and inner passage. In the first study published on the site, in 1906, was conjectured the idea recently admitted that marked the summer solstice. Barclodiad and Gawres, is another mound partially reconstructed. Is by the sea, on a cliff at Cable Bay. By arrangement the inner chamber is shown. 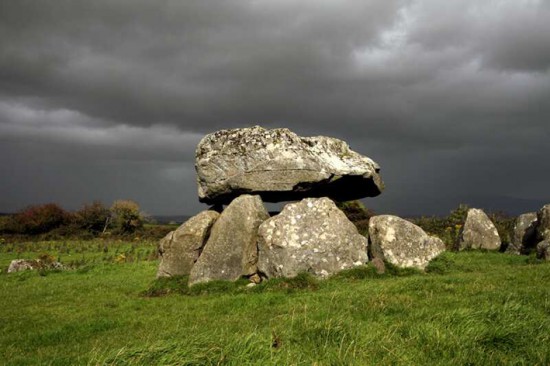 Across the Channel, in Brittany, are the unique menhir alignments of Carnac. Built between the fifth and the third millennium BC is believed to be one of the humanity oldest necropolis, regardless any other theories about its role as the place for ceremonial calendar, or actually petrified Roman soldiers defending San Cornelius. The place is amazing and endless. Only from the air is possible to get an accurate concept. Jacques Cambray wrote in Monumens (sic) Celtiques ou recherche sur le culte des pierres, in 1805, about the difficult access to the place and the feeling at the sight of the alignments: “Je n’essayerai pas de vous peindre ma surprise à la vue de ces masses imposantes, se prolongeant vers l’horizon, au milieu du désert qui les environne ; de ce monument si sévère, si majestueux, si prodigieux par son étendue, par les efforts qu’il fallut faire pour l’élever...” (I will not try to conceal my surprise at the sight of these towering masses extending to the horizon, in the desert that surrounds this monument so severe, so majestic, so prodigious in extent and by efforts that have had to incur to erect ...) Some 2730 menhirs and other minor monoliths are aligned in a dozen rows over several kilometres. The westernmost group, called Le Ménec gathers 1169 stones along 3116 feet. Further east the most visited is Kermario, where stand the largest menhirs, 982, and a dolmen. Eastwards alignment continues in Le Manio, Kerlescan and Petit Ménec groups. In the first there is also a square formed by a large standing stone about 18 feet high: the giant of Manio. A pair of huge mounds or cairns completes the group: Saint Michel where a chapel was erected upon the roof and the smallest of Kercado amid a delightful forest. East of Carnac, following the road to Nantes, is the Gulf of Morbihan, le Petit Mer. And in that area are Gavrinis and Locmariaquer monumental groups. In Locmariaquer are preserved several passage tombs: the large circular cairn Table des Marchands, Er Grah tumulus, and a huge menhir of 280 tons sectioned into four parts. Would reach sixty feet high if it were still standing. On the small Gavrinis island is a well preserved cairn, unique for its tombstones inside engraved with spirals and circular motifs.

Cultures that erected megaliths also spread through the Iberian Peninsula, and western Mediterranean islands, where style is known as Cyclopean architecture. More recent in time corresponds to the end of the Neolithic and early Bronze Age. Strabo, Greek first century geographer and historian, talking about a temple dedicated to Hercules set out in the current cape San Vicente remarked that  "...there are no altar to Hercules or any other god, but stones in many places arranged in rows of three or four...". In 1772 the Hispanist scholar and traveller Richard Twiss noted that on the route between Porto and Almeida were groupings of stones recalling in a lesser extent those of Stonehenge. In Menorca are remarkable the structures shaping inverted ships named navetes. Naveta des Tudons a still perfectly preserved also carrying with its own legends is a perfect issue in the vicinity of Ciutadella. Other constructions where a block is supported horizontally on another are called talaiots and are related with some kind of funeral ceremony in which the body would be exposed to weather or cremated. Some villages, usually located on hills, such as the Torre d'en Galmés or Trepucó would be still inhabited in times of the Roman conquest. 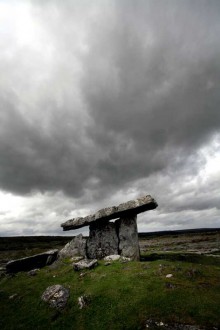