Homepage > On a Bridge, one Night amidst the Fog

On a Bridge, one Night amidst the Fog

I am a blackmail victim. Someone pointed out the existence of some old pictures I will not itemize. But extortion has not obtained the expected outcome. I keep in my power some old photographs where blackmailer appears, but probably only are useful to remind she once was young, or, at least, it can be traded.

We began the traditional message exchange process to determine where the exchange was to take place. Delivery instructions have come in a maze of words and memories. Finally we found that the ideal would be to wait for a night when the fog was dense enough to hide the present identities - the past are forgotten and reflected only in photographs and memories, future are still to be build - and in a place that ease evasion in opposite directions. That is: on a bridge, one night amidst the fog.

Wait for the fog would not be difficult in a month as wet and cold as November is. Determining where entail more complications than expected by the scammer, who shortly eager for displacements didn’t properly calculated bridges had not been spared in Venice.

In her ignorance proposed any bridge on a channel. Regardless Murano there are only three channels in Venice: the great one, Cannaregio and the Giudecca. All others waterways are called rii, rivers. So it meant to look for a bridge over a restricted selection, but also the convenience. The Grand Canal has four bridges since Calatrava perpetrated his between the bus and railway stations. It is the most modern, but, just as the other three: Scalzi, the famous Rialto and the Accademia are too busy and pedestrians traffic does not stop even after dark. There are only two in the Cannaregio canal, the Guglie between San Geremia and rio terá San Leonardo, also too crowded, and the Tre Archi, beyond the Ghetto, which aims overly pretentious triplicate reflected on the waters it crosses. About the Giudecca canal is all said: no more bridges than the vaporetto.

Then I thought about the desirability of a bridge without railings, to facilitate the eventual disappearance of the deceiver. This drastically restricted the possibilities: there are only two, the Diavolo in Torcello, too far to travel at night or the ponte Chiodo, next to the San Felice fondamenta, but the latter only leads to a gate, usually closed to strangers.

There is another bridge that has always fascinated me. Build in metal is near campo Bandiera de Moro. Do not cross water but in the air, lightly through the street of the Pietà. Communicates homes and is not accessible to criminals. The famous covered bridge of Suspiri fascinates the masses, which didn’t in his heydays when only inmates crossed leading to the Ducal Palace dungeons. But it is not feasible at night and also, as I have noted, one of its outputs only lead to prison.

Old meeting point for brawls between San Nicoló dei Mendicoli and Castellani neighbours, ponte dei Pugni cross the rio San Barnaba besides a barge where vegetables are for sale. Four templates mark where the feet were placed to start the fight. I do not know if it would be helpful to mark the beginning of an exchange, but the Jazz Club is within walking distance.

The interim are useless. For a few years a wooden one was built to reach San Pietro di Castello island while repairing the usual bridge, but no longer exists. In November, although the fog was very dense, would not even for nefarious purposes be used votive bridge which is installed on barges near Santa Maria del Giglio by the Salute Party, when thousands of people marched on pilgrimage to light candles to the Virgin thanking the end of 1630 plague.

Or perhaps we might look for a wooden bridge leading to the Ghetto Novo keep by two closed checkpoints, but its usual to see hanging clothes around. Or the one in front Arsenal entrance with Greek lions sacked by Francesco Morosini in Piraeus harbour in 1687.

There are also those which tell stories just in its name as ponte delle Maraveglie. The bridge is nice though not wonder, Maraveglie was the name of the family who lived in a house opposite. Or the ponte del Milione, homonymous with the yard where Polo family has their residence, whose best known member was Marco, ambassador to the Khan. Or the Dona Onesta, a wonderful metal bridge on the rio Frescada under the gaze of a mask which according to the version of the story was the only honest woman in city. Only for the name also could be chosen Nostalgia bridge, but it only existed in Hugo Pratt’ mind. Actually it is ponte Widmann, beside the palace built by Baldassare Longhena for an Austrian family so surnamed.

And the possibilities goes on ... there are shy bridges, almost anonymous, sometimes they are just simple gateways, others are just looking to be disproportionately proud, they only look for to be portrayed. Exhibitionists. We agree better the first kind.

Finally the time has come. Looking through the window just to know whether sunset has already turned in dark night. Just knowing if there are streets, rivers or bridges. Nothing is known at all. I cover with my coat. Dark. Besides the night is cold. I have no choice but to go through piazza San Marco, but it doesn’t matter. Almost there is no chance to distinguish neither the campanile nor the winged lion upon the column in the piazzetta.

Only Procuradurie lights. Passers by silhouettes go briefly in the dense atmosphere, so overloaded that mitigates the streetlights making them distant, dissolving the incandescent light bulbs in space. Any reflection in the channel have gone. Water is still. It's like an existential void. In the retina volumes of buildings, bridges and fondamentas are merging and all in the touch of air on water surface. This, under the bridge or in the air, encircles everything.

When, suddenly, the consciousness of the arrival of an unexpected presence, but awaited the same fog surrounds. The exchange of envelopes, agile and quick, is eternal. It has no time dimension. Contact is infinite.

Returning to my Venetian cubicle I cross more bridges. It's unavoidable. But it seems that, indolent, fog dissipates. Shadows have returned and now are thick and heavy. Reflections on channels waters have refloated. Time is running again and is felt in the clatter seems relentless on the campaniles.

I open the door and heating relive me immediately. I'm still stunned by the cold and the encounter effect. The exchange has been uneven but not unfair. Eight images in exchange for one, but has given rise to a new story. 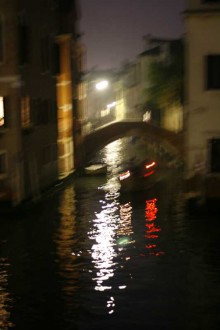