It is one of the most known Girona landmarks, the facades looming to the Onyar River reflecting their colourful facades on the waters along city’s bridges.

Although actually they are not properly the facades but the back of the buildings that were built from the Rambla and Argenteria Street, along Ballesteries and Calderers streets on the eastern bank of Onyar River before it poor its waters into the Ter River. Long ago, when there was still a wall defending the city and using the river as a moat, there were many buildings attached using it as a common wall. When it was demolished in the nineteenth century, new buildings replaced those that relied on the wall. Its main facade faces old town streets but their backsides peeked into the river. 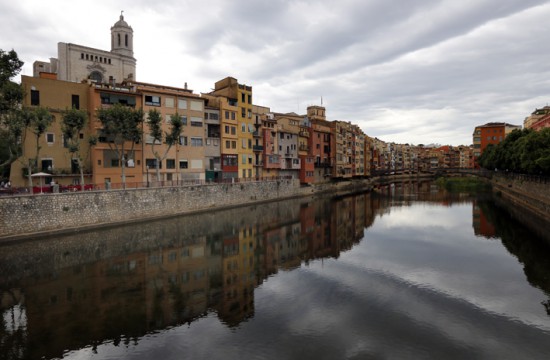 They are also called cases del riu, meaning the river houses or just the terraced houses lying its appeal on their eclectic element styles and shapes: the variety, of balconies protruding supported by balustrades, galleries that seem to enter into the building, structures of different heights, paintings, glazed balconies, sliding wooden curtains or shutters, closed balconies attached, unique doors and windows, isolated galleries... but all this ensemble was not always appreciated as nowadays nor it had the some pretty looking as it got now after rehabilitation. In 1959 Joaquim Ruyra i Oms, Girona writer and poet, wrote in the local magazine Auca Comercial that from the Stone Bridge hom veu les cases de Girona estendre's a banda i banda del riu, tot malgirbades, desiguals i tosques, formant un conjunt virolat com una munió de captaires vestits amb robes apedaçades amb tota mena de parracs. Cap arquitecte ha ideat una sola de llurs línies; han crescut sense art ni regla, seguint les sinuositats del riu i adoptant amb franquesa, a la vista de tothom, l'actitud més convenient per llençar a l'aigua llurs immundícies.  (Girona houses are seen extending to both sides of the river, all ragged, uneven and rough, forming a garish set as a multitude of beggars dressed in patched clothes with all kinds of rags. No architect has designed one of its lines; they have grown without art or rule, following the windings of the river and adopting frankly, in view of all, the most convenient attitude to throw overboard their uncleanness.)

The houses deteriorated throughout the twentieth century until the first renovation was done in 1982, repainting the facades and giving them back their original colours. Twenty-seven years later a new rehabilitation that included eighty-three houses took place. Thirteen facades were repainted and cornices, balconies and carpentry consolidated. Although most of the action was carried on the east bank some facades of the opposite shore were also included.

One of the facades, the one of Masó House, stands out from the rest whit its white painted, blue and yellow tiles carpentry from La Bisbal factories. In fact it became a mansion merging four buildings that correspond to the numbers 29 to 35 on Ballesteries Street, which acquired and renovated between 1911 and 1918 the architect Rafael Masó i Valentí, turning the place into a symbol of Modernism in Girona. Currently owned by the municipality, hosts since 2006 the headquarters of the foundation that bears his name and which facilitates the visits.

The stretch of river where the famous Onyar houses are concentrated is flanked to the south by the Stone Bridge built in 1856 to replace the old medieval bridge and to the north by Sant Feliu Bridge. Between them, both sides are connected by three bridges: Peixateries Velles, Sant Agustí and Gomez. The first, was also known as Pont de Ferro, or Palanques Vermelles, - Iron Bridge or Red Runway - referring to the colour of a former crossing. It was laid by the Eiffel Company of Paris and ended in February 1877 in exchange for the amount of 22,500 pesetas. Sant Agusti Bridge connects Independence Square with Argenteria Street and it is from here where is obtained the most characteristic view of the houses but comparable with the one seen from Gomez Bridge, between Sant Agustí Square and Ballesteries Street. This dates back to 1916 when it was built by the company Construcciones y Pavimentos for the modest sum of 13,500 pesetas. The name comes from Miquel Gomez owner of the building who had to be demolished to open the crossing. 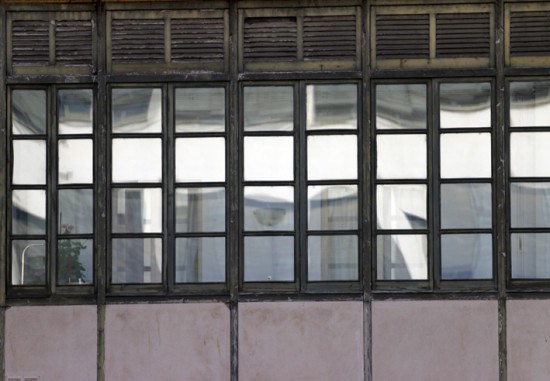 Since the houses overlook the Onyar River they have seen it overflowed on several occasions, a marble slab on the facade of the town hall attests the level reached by the river on October 18, 1940 killing eight people. Another wall in a house on Ballesteries Street recalls the floods of the years 1962, 1963 and 1970, which never exceed the 1940 one.

Careless about the levels reached by the water, gulls and ducks enjoy on the facade reflections while below, few inches below, carps looks like still while they try to swim upstream. 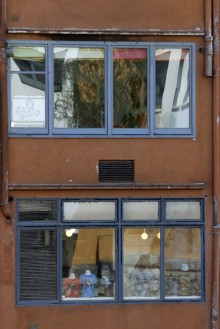