In Zona Velha, downtown Funchal on the Portuguese island of Madeira, there are many restaurant terraces that extend their tables and menus up to the street. There are also some art galleries that seem to emerge shyly. With more strength have mutated, since early 2011, the doors of homes and businesses that have been transformed into canvases. A real outdoor exhibition.

Turn of the century talking heads in the O Ginjinhas entry, a tavern, fantasies of mermaids and sea gods, animal faces, ceramic small spaces, a white female figure on a red background, a girl surprised with the mailbox, surfboards stacked in an empty sandy beach with palm trees, colourful silhouettes trying to hang from a pair of rings, eclectic portraits from school memories, a face covered in a Tuareg way, poems dedicated to the island, portraits in Tenda Velha doorways, another tavern, hugs at ground planters, window boxes at ground and, repeated, a short phrase which states that ninguém pode sonhar por ti. Nobody may dream in your place. All of these is around old town ruas.

The project Arte Portas Abertas was born by the hand of many artists who were coordinated with the city council and decided to take it out on the streets of the Old Town, particularly in the Rua de Santa Maria. The project was inspired by a similar one that was developed in 1994 in the town of Valloria in the Italian Riviera. 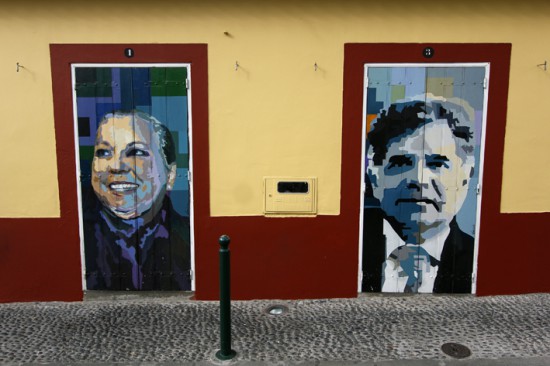 Initially there was reluctance among the neighbours, who were not fully convinced with the project, but were slowly giving the permission to work on the doors. The Open Doors idea relies on the concept of threshold opening to art and culture and is intended to encompass artistic aspects that are not exclusively painting holding other encompassing visual arts, sculpture, photography and even writing, some of them also ephemeral.

The first changes were made ​​in April 2011. Marcos Milewski spent a month at the gateway number 77 Rua de Santa Maria and Gonçalo Martins finished the first door a few meters in the numbers 81-83. They were just the first two. Then painted doors were increasing until almost one hundred in the surrounding streets, rua Portão São Tiago, rua dos Barreiros, João Caetano's travessas and das Torres, the calçada do Socorro and Aspirante Mota Freitas and Dom Carlos I streets. A new world of colour that has occupied a space that threatened to become monochrome.