There was a time when the kingdom of Ulster, Ulaidh in Gaelic, one of four that existed on the island of Ireland with Connacht, Munster and Leister, left no heir to the throne. To solve such mismanagement was agreed a challenge, a boats competition, whoever who touched before the bank would be king. They say that the competition was tough and was already emerging a clear winner and future monarch when Labraid Lamh Dhearg, from the Uí Néill clan, more eager than anyone to sit on the throne, cut his hand and threw it to the shore. Strictly were no discussions about who was the first to score touch down. 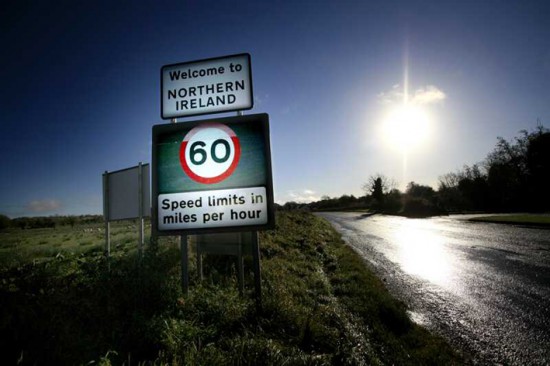 The bloody hand symbol, the red hand, would be used in the nine-year war (1594-1603) against the English expansion. Some of the clans, like O'Neill, incorporated it in his coat of arms. The red hand appears in Ulster national symbols, their shields and their flag. In the years of the Troubles, despite its origins rooted in Gaelic mythology, seemed monopolized by loyalist groups that also incorporated the name: Red Hand Commandos, Red Hand Defenders or the UDF, the Ulster Defence Association.

In the of Northern Ireland symbols Red Hand has often been associated to a six-pointed red star. This represents its six counties: Antrim, Down, Armagh, Fermanagh, Tyrone and Londonderry.

Moneghan, Cavan and Donegal, the other three counties of the ancient kingdom of Ulster, remained in the Republic of Ireland after the partition of the island in 1921. The first six were integrated into what is now the United Kingdom.

The division began with the Anglo-Norman invasion in the Middle Ages and the sixteenth century English occupation settlements, sometimes forced, of Scots, English, Welsh and Huguenot settlers, all Protestants. The famous Plantations. The Battle of the Boyne River, during the Jacobite war, was won by Protestant pretender William of Orange who defeats Catholic King James II. It made differences sharper. Even today, in some places it’s celebrated on July 12 the victory of William, King Billy, with Orange Order parades in Belfast or Portadown. Usually they have preferences for marching through Catholic neighbourhoods openly hostile with easily foreseeable consequences. After the Independence and Civil wars, between 1919 and 1923, partition was consummated preserving in the six northern counties most Protestant and Unionist population. The problems between the two communities did not relax and between the sixties and nineties of the twentieth century heightened terrorist campaigns perpetrated by armed groups on both sides. Royal Ulster Constabulary and the British Army factional mediation did nothing but worsen the situation. Violence didn’t bring anything else but more violence. In 1981 were added the deaths of IRA hunger strikers, Bobby Sands, who was parliamentary, and nine other prisoners in the Maze prison. In April 1998 were reached Good Friday peace agreements than a month later would be accepted in a referendum. On August 15 of that year the brutal bomb exploded by Real IRA (RIRA) in Omagh, which will do away with the peace agreements achieved the opposite effect. The population was weary. In 2005 the IRA left weapons and finally abandoned in 2007 self-government was returned to Stormont, forming a shared cabinet Unionist Reverend Ian Paisley and former IRA leader Martin McGuinness, Sinn Fein elected.

Belfast, the largest city in the north, was the core of clashes between Catholics and Protestants in the years now called The Troubles.

Derry or Londonderry, depends for whom, is a bit the reverse of Belfast. The difference between the two cities brings to mind all that distance Edinburgh and Glasgow. Derry retains intact its core inside their pristine walls which defended the city in many sieges, the longest in 1689, lasted one hundred and five days before the Jacobite troops failed to capture the city defended by Redshanks Scots. The promenade that runs along the city walls overlooks the Bogside, the Catholic neighbourhood that was the scene of clashes with the English army in the 60s and 80s when on a shameful and dark Bloody Sunday, a January 30, 1972, 14 people were killed by gunfire from the First Battalion of the British Parachute Regiment. A mural, called The Death of Innocence just beyond the famous You're Now Entering Free Derry, reminds Annette McGavigan, the student died on September 6, 1971, at the beginning of the riots. Also under the walls, the River Foyle separates the lands administered by the British and the Republic of Ireland. The border is invisible, but not nonexistent. Here's Derry, Donegal beyond. 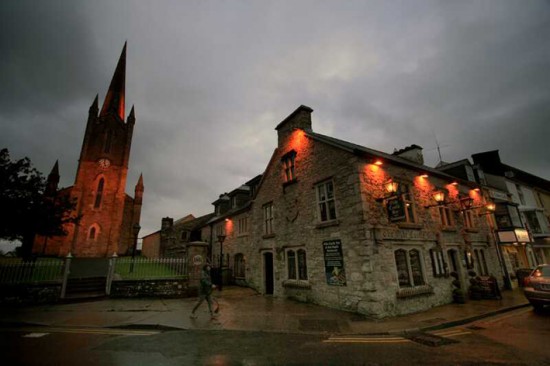 In Donegal autumn lights are reflected in the red maple leaves, plane-trees and beeches over the River Eske. Among them, one leaf seems to unrest and refuse to lose their green colour of youth, despite lying lifeless next to the rest of the litter.

Donegal is one of the three northern counties belonging to the Republic, which is physically attached by a narrow four miles fringe. Its rugged coastline is a continuous advance of land in the sea and vice versa. In some places the sea forces to break against steep cliffs that rival those of Moher. These are the Cliffs of Slieve League near the peat overflowing Glencolmcille valley. Further south is Ballyshannon, where it’s said descendant of Noah Partholón colonized the island.

Donegal city, Dun na nGall or Fort of the Foreigners, the county seat, is on the River Eske. Here are the remains of the ancient abbey where some of the monks coordinated by Brother Michael O'Cleary collected between 1632 and 1636 in the Annals of the Four Masters, Annala Rioghachta Éireann, the story of the four ancient kingdoms of the island, that’s it, the history of Ireland. A monolith remembers it at The Diamond, the main square. Eske River is also next to the castle, built in the late fifteenth century by Red Hugh O'Donnell who would burn it in 1592 to didn’t leave it fall into British hands.

Leaving the Atlantic and returning to the Irish Sea, between the counties of Armagh and Down is the birthplace and the setting for the adventures of Saint Patrick. According to his hagiography was kidnapped by Irish pirates in Scotland and forced to work as a shepherd in the mountains of Antrim and Down. Recognized patron saint of the island his day is celebrated on March 17. His grave is supposedly near Downpatrick Cathedral, upon which there’s a slab to prevent the faithful will take the land of the grave. The city of Armagh has two cathedrals dedicated to the saint, one Catholic and one Protestant. The Catholic was built in Sandy Hill in the nineteenth century and was not consecrated until 1904. The great famine significantly delayed the work. The cathedral of the Church of Ireland, Protestant, is older. According to tradition was St. Patrick himself who raised here in Mhacha Ard Hill, a stone church in 445, although the present building dates back to 1268. Outside is buried Brian Boroimhe or Brian Boru, the only king who succeeded in unifying, albeit briefly, Ireland into one kingdom.

That happened in the first year of the second millennium: 1001. In the nave are preserved two ancient sculptures, a Bronze Age man called Tandragee, by the place name where it was found. It represents Nuadha Lámhairgid, legendary leader of the Tuatha De Danann, one of the first races that came to Ireland and expelled the previous Fir Bolg in the battle of Magh Tuiredh where Nuadha lost his arm For this reason he also lost his kingdom until the physician Dian Cecht built him a new silver arm with which to regain his throne. The other statue represents another king, Labhraidh Loingseach, the horse's ears one.

In Down begins the stunning Irish northeast coast under Mourne Mountains summits, before taking a ferry in Strangford to achieve the Ards Peninsula.

This encloses the Strangford Lough which, despite its name, is not a lake. The area is a birds heaven and also holds the remains of Greyabbey, a former abbey of Cistercian white monks. On the opposite bank, Mahee islands, connected together by a narrow road keeps the remains of the small castle of the same name and Saint Mo-Choí de Nendrum, a former monastery with a circular tower basis, some tombs and a sundial.

Once left behind Belfast estuary begins Antrim coast with the Carrickfergus Castle, built by Jean de Courcy near the port in 1177 after the Norman invasion of Ulster. Time ago some of the nine Antrim valleys were only accessible from the coast. The construction of the coastal road involving huge engineering opened access to the fishing villages of Ballygally, Glenarm, Carnlough and Cushendall. Near the latter town is the tomb of the legendary Celtic warrior and poet Ossian or Oisin, son of Fionn mac Cumhaill and Sabdh. Actually it is a stone age megalithic burial by the river Glenaan. From the shore is perfectly perceptible the Scottish coast, particularly the Kintyre peninsula.

To the northwest are famous Ballycastle’s seaweeds, Carrick-a-rede suspension bridge and the colossal Giant’s Causeway. This is the result of a two million years old volcanic eruption. The sudden cooling of lava caused the formation of hexagonal basalt blocks. About 40,000. Though according to other sources was the product of two giants dispute: Bennandoner from the Scottish coast and the aforementioned parent of Oisin, Fionn mac Cumhaill. Before, the place was known as na Clochán bhFomharaigh, Femorians stairs, the race who dwelt in the island before the Celts arrival. Between 1887 and 1949 an electric tram linked the Causeway Hotel, near the walkway, to the seaside town of Portrush, where even there is the Tudor-style building that formerly was the railway station. The tram started here, passing in front of the Cafe Savoy, renowned for its ice cream before reach the village of Bushmills where is still distilled one of the best Irish whiskeys, and passed along Dunluce Castle before download the passengers on the Giant’s Causeway. 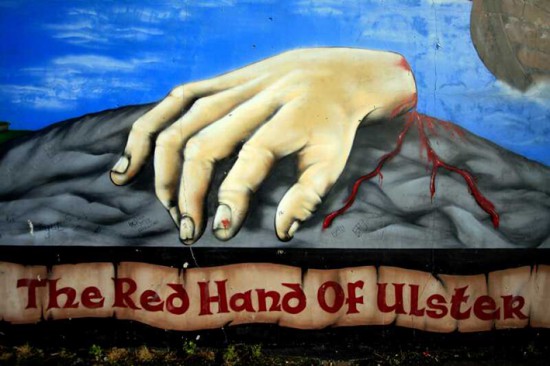 Landscape in Fermanagh is a watercolour. Water is everywhere: lakes, rivers, waterfalls and impregnated in the air, not in vain south of the county are the Shannon River springs. All in Fermanagh are involved with its cold frost mornings,

Fermanagh is the only county that has no bounds with the great Lough Neagh, the third largest lake in Europe. But Fermanagh has its own lakes: Lower and Upper Lough Erne with Enniskillen town as a link between both. Enniskillen was besides Derry bastion of resistance to Catholic King James II troops attacks and sieges.  Its castle, now a museum, houses exhibits on the history and wildlife of the county. In 1845 was erected in the city a column dedicated to the Earl Galbraith Lowry-Cole, the main interest is to climb the 108 steps to get a nice sight of the city and the lake. Although different from that obtained from the Cliffs of Magho, above the Lower Lough Erne and its 97 islands. Among them some are accessible by barge as White Island, where a XII century church has in one of its side walls a curious set of seven statues of pagan origin. In another neighbouring island, Boa Island, accessible by road, there is another pagan statue representing Juno in Caldragh’s graveyard.

County Tyrone, towards Lough Neagh, the great lake that occupies the centre of Ulster, between the towns of Omagh and Cookstown, stands a large set of circles and other megalithic constructions: Beaghmore. Seven stone circles, between 12 and 20 meters in diameter dating from the Bronze Age, appear to be remnants of ancient burials. The site was discovered in 1940 removing the peat that’s used as fuel. Excavations surfaced 1269 stones.

In County Fermanagh south, almost in the Republican County of Cavan, born the river Shannon, the largest in Ireland already charted by Ptolemy. The river is home to many Irish folk ballads that can be heard in pubs when atmosphere heats up. One of my favourites is Three Young Ladies Drinking Whiskey Before Breakfast. 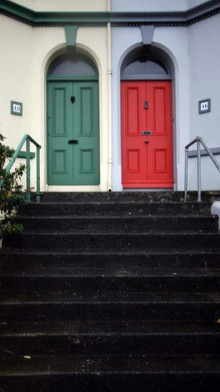 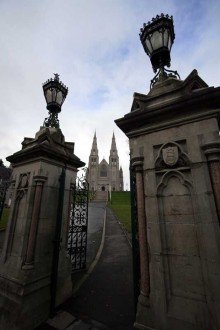