They say God created the universe in seven days. They say on the seventh He rested. They also say that going to rest lean his hand on Earth, in Galicia, where they said He left the imprint of his fingers deeply marked. That piece of land is Rias Baixas, the footprint is the sea going deep inland, split three peninsulas: Barbanza, Morrazo and Salnés. They also say the thumb formed Corcubión estuary, the stretch of coast that runs between Cape Fisterra and the point of Louro. 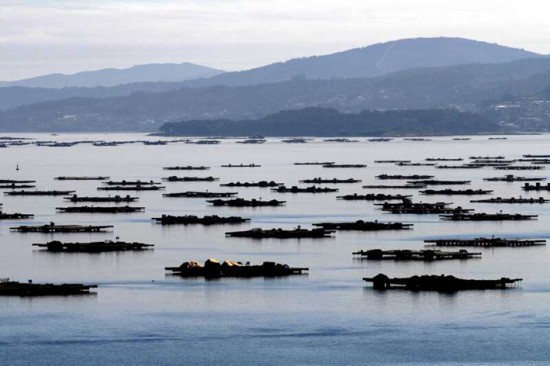 Fisterra was once the end of the earth, where the known world got its bounds. For that reason it was an alternative to the conclusion, though not mandatory, to the Camino de Santiago, The Way of St James. The pilgrims, after visiting the mausoleum of the Apostle, came to burn their clothes and bathe as symbols of purification. After collecting the scallop shell, evidence to have concluded the route, they come back home. Since the nineteenth century lighthouse indicates its position to the ships that come to this corner of Galicia, this bend of Coruña. From the lighthouse, turning our gaze to land, Quense and Gures beaches, Cee Cape and Mount Pindus are sensed. Further south Carnota dispute with neighbouring Lira and Araño for having the longest hórreo in Galicia. But even despite its nearly 115 feet long and forty-four floor stands, is actually the third. Next to the hórreo is a Baroque dovecot and the church, also baroque dedicated to St. Columba.

Carreiro Point and Louro officially mark the northern entrance to the Rias Baixas, index finger and overview of the Ria de Muros and Noia. Muros is a beautiful town nestled between a hill and its harbour. That makes its streets so steeply, even with steps to ease the ascent. Some streets have evocative names such as rúa da Soidade, Solitude street, or Paciencia, the patience, or the rúa da Luz leading to the church of the Virgin of Carmen. Closer to the sea is rúa Real, between the food market and the town hall, with its sunny terraces when not needed, rain permitting, bring close to the arcades. Sanctuaries are Virxe do Camino, medieval, leaving the village, and the parish church, which was the Collegiate of Santa Maria del Campo, a few steps away on the city hall, with a nice porch covering the entrance where the council met once. Also lingers the memory of his extraordinary and tasty mussels and scallops.

On the other bank, in the Barbanza peninsula, Noia, the small Galician Florence, legend wants founded by a granddaughter of Japheth, son of Noah, owns shipyards and sea walls that resisted British attacks. Noia’s core, its old buildings with Gothic, Baroque and modernist styles, is concentrated among the crenellated city hall and its strand overlooking the estuary and after the bridge closes on Tambre river. In Tapal square a beautiful gothic stone cross that once rose in nearby Ponte Nafonso town gets in the perspective of San Martino church, in a style close to that of Santiago cathedral, displaying its busy facade where trumpeting angels share space with the apostles and a dozen musicians.

Past Porto do Son double walled Castro de Baroña ancient stones overlook unblushingly seaward. Excavations have documented there were metallurgical and fishing activity in the village along the Iron Age. At the end of peninsula Corrubedo its kilometre-long big mobile dune, is a sandy culmination. It is part of the Natural Park along the Carregal and Vixán ponds, not far from the Axeitos Dolmen, also known as A Pedra do Mouro, moors stone, one of the best preserved in Galicia.

The middle finger formed Arosa estuary, where Santiago Apostle’s body arrived to Iria Flavia, near Padrón, where now they sell T-shirts with the legend Padron Green Hot Chili Peppers, some are spicy and others don’t. Arousa is space for mussel rafts, inseparable part of the landscape. On the north bank are Ribeira, Pobra do Caramiñal and Rianxo, known by a popular ballad.

On the southern shore, with its famous clams is Carril and past Villagarcía, lays Vilanova de Arousa, a small fishing village where was born Ramón del Valle Inclán. In his natal house there’s now a museum dedicated to Lights of Bohemia writer. Opposite the town is Arousa island, linked today by road through a long bended bridge. Before it was opened in 1985, access to the island was made by small steamers or boats. Fish salting industry developed in Arousa along  nineteenth century. In twentieth it became into canning. 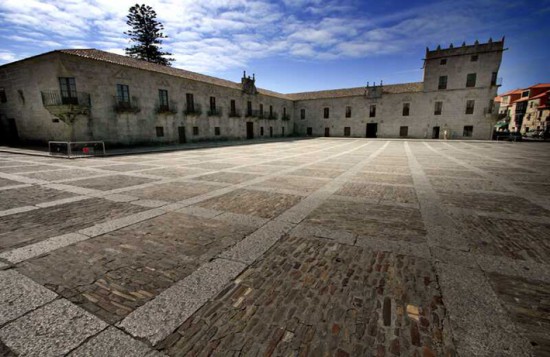 Vineyards core for Albariño wines this area is protected by Rias Baixas designation of origin, Cambados town is practically the cradle. In the vast and monumental Fefiñáns square are the manor of the same name, formerly called Figueroa and the church of San Bieito. In the vicinity of the square is the Parador de Turismo, the tourism lodge was before the Pazo de Bazán where the writer Emilia Pardo once dwelt, not far from the literary manor pazo of Ulloa. Beside the O Grove peninsula is the island of La Toja, or Toxa, joined to mainland by a bridge build in early last century. It had been transformed into spa and was also known for the soaps that were manufactured there. San Caralampio hermitage is unique, completely covered by scallop shells, preserving moisture in the building.

Following Portonovo and Sanxenxo is the way in to Ria de Pontevedra, the ring finger. Shortly before reaching the capital, in the Poio concello, (municipality), Combarro parish retains a rustic old town which concentrates the character of Galicia  old fishing villages. Combarro has thirty hórreos, granaries, mostly arranged by the sea. It also retains in its streets seven cruceiros, stone crosses, with the peculiarity that every crucifixion has on the reverse a figure of the Virgin facing the sea, as she would be waiting the return of the fishermen.

Next to concello of Poio is the province capital Pontevedra. Its name comes from the Latin Ponte Veteris, old bridge across the river Lérez. Stop at the Portuguese pilgrimage route to Santiago, which goes by Tui, follows Redondela and has in town their particular chapel at the Shrine of the Pilgrim Virgin. This is peculiar. Its plant is shaped like a scallop, almost round, a unique convex facade. Attached to the façade are  the statues of the Virgin, Santiago and San Roque dressed as pilgrims. Pontevedra old town is contained and pleasant, only surpassed by the monumentality of Santiago, with small squares like Leña square and its cruceiro beside the manors that houses the Provincial Museum in nearby Verdura square.

Leaving the capital and following the river, the road leads to the towns of Marin and Bueu. Here near lie hidden the maze petroglyphs in Mogor, dated to the Neolithic. The route continues to Cape Home, separating both estuaries Pontevedra and Vigo, the little finger. In the end, in the Bay of Rande was fought in October 1702 the naval battle between Anglo-Dutch and Spanish-French navies during the War of the Spanish Succession. Also in the bay is Arcade, famous for its oysters, which can be tasted in Vigo, why not?, in Oysters’ street, where are freshly served open on granite tables in front of the bars and next to the A Pedra market. In the Porta do Sol a stainless steel sculpture, designed by Francisco Leiro, known as the Sireno, has become the new symbol of the city. Maybe it's a man-fish or xacio, amphibious human figure present in Galician mythology, related to Atlantis newts, the British Mer-men or Irish merrow. In other times perhaps could have been the fishermen Berbés seaside neighbourhood homes or the remains of the fort that seems to watch the estuary from the hill overlooking the city.

Rias Baixas just end to the south, near where Monterreal Castle guards the city of Baiona, where the Pinta arrived with New World discovery news. The Atlantic National Park islands closed the three southern estuaries. It was created in 2002 to protect the fauna and flora. North are Sálvora and Cortegada in Arousa; Ons archipelago off Pontevedra and the famous Cies in Vigo mouth, just where the band Siniestro Total, on his record When you eat here? proposed to go to kill hippies. 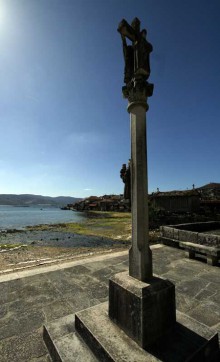 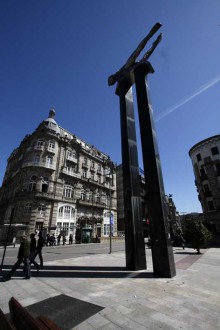