Sa Penya means nothing else than the Rock and is the name of a neighbourhood looking out over the port of Ibiza. Here disembarked, in the mid-fifties, the architect Erwin Broner. 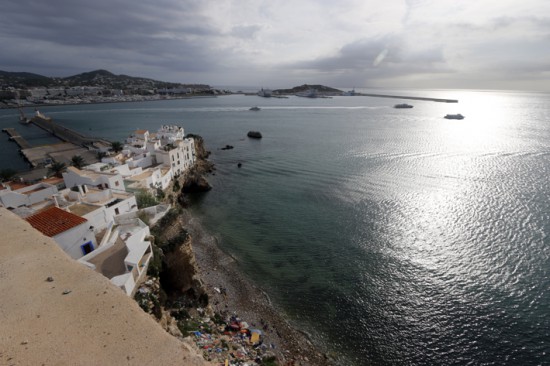 From Santa Llucia bastion or alternatively from Jaime I viewpoint, close to the cathedral, is perfectly appreciated the quartier layout and why it bears this name. It’s wedged between the Renaissance defences designed in the seventeenth century by another architect, the military Giovanni Battista Calvi, and the sea, which surrounds both sides of the rocky promontory recalling a ship’s prow. In its southern slope there is a small beach, Baix de Sa Penya. Not even ten streets, reminiscent of the whitewashed Aegean, run parallel under the wall and even fewer reach the tip of the promontory. Mare de Deu Street, and so there are no doubts about the name there’s a little niche storing an image of the Virgin Mary, becomes at its easternmost end a small viewpoint in Sa Torre Square, whose name recalls that here there was a tower defending the access to the port. The street names are quite descriptive and look like adequate: carrer de sa Pedrera, Vista Alegre, carrer Alt, Retir, carrer Fosc, Sa Riba meaning Quarry, Nice View, High Street, Retirement, Dark, and Shore. From its walls overlook small balconies and small isolated windows on white facades that reverberate the twilight that prolongs the shadows. Occasionally the blinding whitewashed walls are broken with Sevillian ochre or with blue hues that seem to come from the same Oia, Santorini, surrounding the frames of some thresholds. There are stairs that ascend hesitant between streets that do not share the same level and sometimes hide their steps after unexpected twists. The lower end of the main axis, Mare de Deu, changes in the summertime when small restaurants set up their tables on the street and the area becomes one of the liveliest focusing the gay scene of the city. The rest suffered a gradual process of degradation and marginalization that caused headlines such as Sa Penya, a neighbourhood no longer to love or Hell is called Sa Penya and that has led to the creation of a group that claims its urban and social rehabilitation. 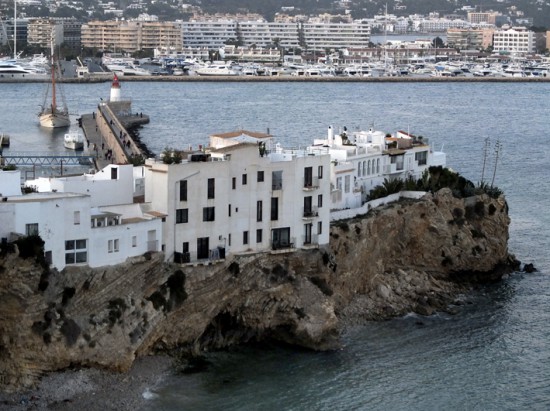 This was, in other times, a fishermen and port workers neighbourhood that vanished along the years of the mass tourism arrival. Since the fifties it merited the attention of renowned rationalist architects as Josep Lluis Sert or Erwin Broner. The last discovered the island in 1933, when he left Germany because of the rise of Nazism, and there the traditional rural buildings. Broner and his wife return to Ibiza in 1951 after a long tour in the United States and France, this time they installed in Sa Penya, although not definitively until 1959. Broner works as an architect but also as a painter, the same year created the so-called Ibiza Group 59, with the participation of artists Erwin Bechtold, Hans Laabs, Bob Munford, Egon Neubauer, Antonio Ruiz, Carlos Sansegundo, Heinz Trökes and Kattja Meirowsky, only female component. They basically dedicated to abstract painting regularly organizing exhibitions at the gallery El Corsario, now converted into a hotel. The Ibizan poet Marià Villangómez gave news of the creation of the group in an article published in October of that same year in the literary magazine Papeles de Son Armadans: Originating from a beautiful variety of countries, having some a long residence on the island, one might almost say rootedness. Well, have been painters, or a handful of them, those who have felt the need, convenience at least, to unite and organize. Thus was born the Ibiza Group 59.The group would disaggregate five years later, in 1964. 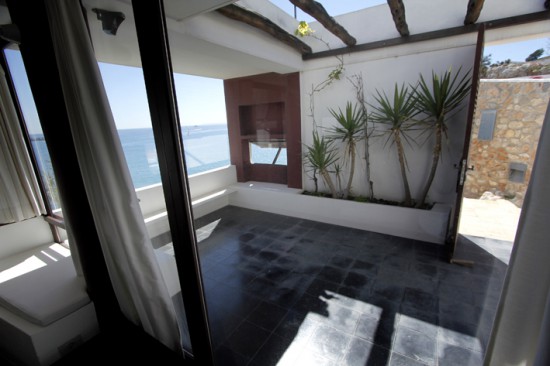 In 1960 Broner bought a plot at one end of Sa Penya where to build his own home using, obviously, its architectural design concepts. From Mare de Deu a few stairs lead to the Travessia de sa Penya alley and there, at number 15 is the house. Barely a plaque at the entrance to the disclosed lets know the place. The building has two floors; the one at the ground level is the living room with a large dining room, kitchen with a fire place with a bedroom behind. A large window provides nice views of the sea, from Illa Grossa in the port entrance to Formentera, which is clearly seen on the horizon. On the lower floor he had the studio and the office and an open antechamber functions as a receiver.

In 2003, two before architect's wife, Gisela, died, she gave the property to Ibiza town hall along with materials related to Broner’s work: furniture, letters, photographs, books and other documents. All of these have been collected and exposed in the MACE, Museu d'Art Contemporani d'Eivissa. In 2011 the house was opened to the public, restored and with original furnishings, such as a new unit of MACE and in 2012 it joined the international network of Iconic Houses which discloses emblematic buildings open to the public. 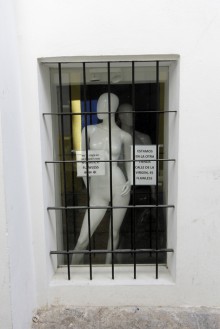