Homepage > Scotland, Tales from the Border

Scotland, Tales from the Border

Leaving Northumberland, the last of the English counties, there’s a nearly invisible border, separating England from Scotland on the Cheviot Hills. And it could be completely invisible but there’s a large sign reading Fàilte gu Alba, (Welcome to Scotland), a large St. Andrew’s banner and a hot dog stall. From the viewpoint there’s a first look to the newly trampled Scottish land. The Lowlands in front of the eyes. An extensive series of soft, gentle green hills. A never-ending golf green.

But it hasn’t been ever so peaceful. The Scottish Borders were for many years an endless scene of bloody battles, raids, revenge and war between both neighbours, not always well-matched.

Carter Bar, where today is the viewpoint ... and the sausages, was once called Rede Swire. Perhaps it was when the place witnessed the southward advance of King Mynyddog armies, from Gododdin’s tribe, to be heroically slaughtered by the Saxon invaders in Catraeth. His epic glory would be sung in the book Y Gododdin along the Middle Ages: Three hundred gold-torqued warriors / fearsome, splendid in action / Alas, they did not return.

Tribal borders varied over the centuries. Not stabilized until 1018, with the defeat of the British in Carhamon-tweed, during the reign of Malcolm III. Would be set almost certainly in the Treaty of York in 1237.

Independence Wars in the thirteenth and fourteenth centuries generated people as William Wallace and Robert the Bruce. Both fought Edward I armies, who had subjugated Wales. Wallace, who became Guardian of Scotland with Andrew Murray, defeated British troops commanded by the Earl of Surrey at the Battle of Stirling Bridge. Eight years later, in 1305, would be captured by treachery in Glasgow and taken to London where he was brutally executed. His head displayed on a pike and his body dismembered, divided throughout the country. Today full body sculptures are dedicated throughout the country: in Edinburgh Castle, in Aberdeen, in the huge National Monument near Stirling. Even the British have dedicated him a plaque at the point where he was put to death in Smithfield, where the meat market in the heart of London. Robert the Bruce succeeded Wallace in rebellion. More fortunate he managed to be crowned King of Scotland in March 1306.

The eighteenth century brought the Jacobite uprisings, a succession of specific conflicts with a common denominator: seize the crown and raze the territory. After the 1707 Acts of Union, Scotland's fate would be more closely linked to that of England. George I from the House of Hanover ascended the throne in 1714 without the agreement of James VII of Scotland and II of England and his lineage, the house of Stuart. Thirty years of conflict generated new heroes. Robert Roy MacGregor was perhaps the most famous among them. Or at least that was commissioned by Defoe, Wordsworth and Sir Walter Scott pens. In 1723 Daniel Defoe drew a sketch of the character in the novel The Highland Rogue. The biography written by Scott, Rob Roy, enhanced his character. William Wordsworth, during a visit to the country in 1803, wrote the poem Rob Roy's Grave.

The years between Independence wars and the Jacobite rebellions were far from placid and peaceful. Raiding was common on both sides of the border, on either bank of the Tweed River disregarding whether victims were Brits or Scots. Even in peaceful days cattle rustling were a common practice. To prevent assaults and looting houses were fortified building towers two and three stories high, often surrounded by a wall to safeguard the cattle, as Smailhome Tower. This suffered its worst period during 1540 war, the Rough Wooing, caused by the attempt of the English King Henry VIII to marry his heir Edward VI, Mary, to the Scottish crown heir. In 1544 a reivers raid lasted for two days and took a hundred prisoners and captured six hundred livestock. These attacks forced the border landowners to negotiate neutrality trying to preserve their properties.

A mid-eighteenth century Smailhome Tower became property of the Scott family. One of them was to become one of the most prominent Scottish writers. Sir Walter Scott knew the tower in its infancy and during the years he served as sheriff in close Selkirkshire. There he got lively interest in the traditional border region ballads and tunes. In Clovenfords inn he would be introduced to a shepherd whose mother would be a source of enlightenment for Scott. In 1802 he published in two volumes Minstrelsy of the Scottish Borders. 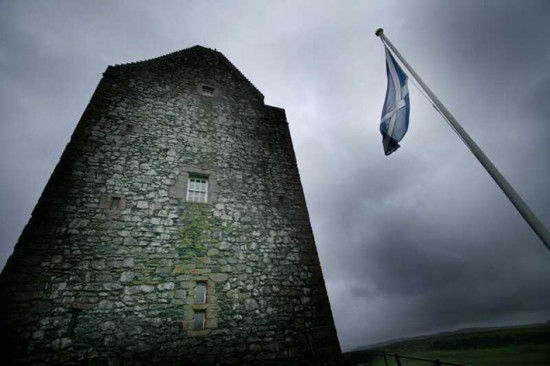 Villages, abbeys and convents succumbed to raivers and English army incursions. The largest monasteries near the border, and close to each other, Jedburgh, Kelso, Dryburgh and Melrose, suffered from the late thirteenth century the consequences of their location. Abbeys, built around the XI century, received different monastic orders, thanks to the interest of the Scottish King David I. Augustinians settled in Jedburgh, while the order of St Tiresias would do it in Kelso and Cistercians in Melrose. After Stirling Bridge defeat, during independence wars, the Earl of Surrey, revenged looting Jedburgh. A few years later was burned again in the celebration of the English victory at Neville's Cross. Already in the sixteenth century another Earl of Surrey, continuing the tradition, put fire one more time to the abbey, adding the neighbouring houses to the fire. During the Rough Wooing the four abbeys were attacked and plundered. Dryburgh would no longer be repaired and, in 1545, the Earl of Hertford ordered the demolition of Kelso. The end of the other two comes in 1560 with the Protestant Reformation. The last monk died in Melrose in 1590. From all of these nothing else than ruins remains. Spectacular ruins.

Jedburgh is the only more or less remarkable town between Newcastle-upon-Tyne and Scottish capital Edinburgh. Not far from great, either exceptionally small, but absolutely affordable by foot. The castle, now a museum but prison in other time, is at the top of Castle Gate. From there overlooks the street up to the main intersection in Market Place, where High meet with Canongate and Exchange Street. A fashion store displays unfashionable genre. Close to a parking are one of the few hotels in the city, the Royal, and beside a plate commemorating the famous poet of the Lowlands, Robert Burns, who overnight here. Perhaps it was the same room. Behind the Inn walls is a small restaurant, The Carters, where food is reasonably fine. But undoubtedly, the main purpose for a visit to the town is the ruins of the abbey. In the evening, just before sunset, looks like the skeleton of a large whale stranded on a beach. Bones become pinkish while the twilight passes the empty structure. Opposite the cemetery gravestones share newfound hue of the stone. In the morning, with the new rain, the colour has changed, now is a predominantly sad blue dyed in gray shades.  The rooms, now roofless, once occupied by Augustinians no longer provide shelter from the rain. Only a chapel near the transept protects old graves. The nave, the heart of the whale, preserved entire, although devoid of ceiling, colonnades and rows of windows. Can still be seen zoomorphic watermarks in the side door jamb.

Dryburg Abbey, located in a Tweed river meander is home to some of the extravagances joined in the eighteenth century by its, then, new owner, the eleventh Earl of Buchan, David Stuart Erskine, romanticism enthusiast, and involved in the founding of the Society of Antiquaries of Scotland. Erskine decorated ruins with gardens now disappeared, joined a monolith dedicated to Hugh of Moreville, founder of the monastery and ended up choosing the former sacristy to be buried. With his purchase, the Earl of Buchan contributed to the preservation of the ruins. For family ties were also buried in the abbey writer Walter Scott and Earl Douglas Haig Bemersyde, commander of the British Expeditionary Forces who contributed to massacre their own troops on the front lines in France and Flanders during the First World War especially during the Somme offensive.

The ruins of the Abbey of Saint Mary the Virgin at Melrose are definitely the most spectacular, mainly because its size, the conservation of some of its elements and the sculptural wealth of its outer walls. In addition to the gargoyles, demons, virgins, saints and martyrs populate the southern facade. No lack, and I'm not lying, the figure of a pig playing bagpipe. Here, somewhere, is buried, by his own desire, the heart of the Scottish king Robert the Bruce. Melrose exudes some kind of strange emotion, like a whirlwind of different pasts that slip into the soul. As a bittersweet rain. A spiral staircase leads to one of the roofs. A plaque commemorates the abbey bell was cast in 1608 in Holland by someone named Jan Burgerhuys, and summoned the congregation to build a new parish church in 1810. From there the rain keeps reminding its contribution to the landscape, while a melancholic wind embraces the old tombstones graves.

Between Melrose and Dryburgh is a high point on a bend of the Tweed. From  there are sights to the three peaks of Eildon Hill and to the oak woods beside the river. The blue and gray clouds threatening storm contrasts with the emerald green of the wet meadows surrounding the grove. Waters cross careless the and an empty bench remember that someone sat down one day to see the landscape there.

The point has a name, is Scott's View, referring to the writer, Walter Scott, when he lived in the area stopped here to admire the views. They say he did it so often that the horses stood alone. They even say that when the funeral procession carried his body to Dryburgh, the horses stopped here once again, in front of his favourite view.

Nearby in Bemersyde House grounds, there is a large statue of William Wallace. One of the first dedicated to the Scottish national hero. The Earl of Buchan, the aforementioned David Stuart Erskine, fascinated by Greek mythology and romantic nationalism, commissioned sculptor John Smith of Dornick the sculpture.

It was inaugurated on the anniversary of the Battle of Stirling Bridge. I do not know certainly with what intention, but I’m quite sure, beyond the Tweed, Wallace, mistrustful, looks from the corner of the eye towards England. 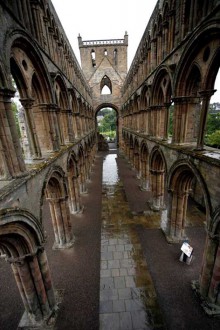 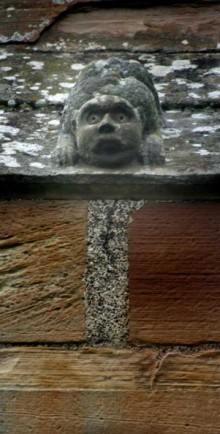