Abby’s fault. With her blue eyes and wide smile misleadingly Nordic covered with a country’s wool hat, as a modern Circe, tried to seduce the traveller and lure him to her island straight from the tourist office site. Lure him to her Shetland Islands, beyond Scotland’s bounds or where Britannia wears as Scandinavia but with Fair Island’s wool. 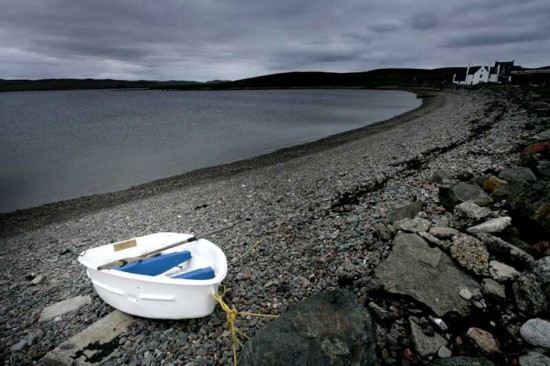 Abby promised a mild climate and endless days. The truth is that the mild climate is a Gulf Stream contribution, reaching Shetland where archipelago separates the Atlantic Ocean from the North Sea, providing temperatures rarely dropping below zero degrees, even during the long winter. With its latitude, 60 degrees north, Cape Farevel is comparable to Greenland, or approximately Alaska’s Anchorage, the temperature is considerably benign. When summer approaches the skies are filled in a fairy soft darkness that prevents night become night even after sunset. They call this state of glowing twilight Simmer Dim Light purple heather and other plants that emerge fresh to the claim of heat.

Probably this was the reason for an early human occupation. The scarcity of fertile soil has favoured Neolithic remains conservation to prove it. More than five thousand sites as Stanydale Temple or Scord of Brouster settlement, for example. The need for protection led to the construction of brochs, dual wall round towers that housed, at least part of the population during the Iron Age. Are all scattered throughout the islands, but the Broch of Mousa is the archipelago’s best preserved. It’s 42 feet high and the structure is almost intact. It’s seen before to land in Mousa island sailing from the Sandvik ferry. Very close to the capital, Lerwick, the Clickimin broch is another fine example of a well-preserved and partially restored one, even there are remains of houses in the enclosure after the outside wall. The Old Scatness, near the airport, still is being excavated, but there are areas that are shown to the public with a small theatrical restoration. Here Picts engraved boar, a bear and geometric shapes onto stones.

Celtic and Pictish tribes occupied the islands before the Roman conquest of Britannia; they knew them as Inse Catt, the islands of the Cat people, the tribe that dwelt in. Even the current name of the northernmost region of the Highlands is Caithness because until the early Middle Ages it was a kingdom founded by one of the seven sons of legendarily Cruithne. Their last king, Taran mac Entifidich died in the year 697.

When Gnaeus Julius Agricola circumnavigated Britain got enough intuiting them. Dispecta est et Thule, even Thule we saw. But they didn’t land, all the way round Viking longships would do in the future from the nearby coast of Norway.

The waves that were to lead Normans to Sicily and Constantinople landfall before among the countless coves, inlets, bays and estuaries call voe here. The first settlements date from the early ninth century and are found in greater numbers in the northern island of Unst, where fifty have been discovered. In 875 Harald Hårfrage occupied the archipelago to stop the raids Vikings themselves launch from the islands on Norwegian territory. As in other territories occupied by them Vikings used to meet annually to decide or amending their laws. The assembly name is Alþingi in Old Norse, which, applied to parliament, led to variations Þingvellir in Iceland, Tynvald in the Isle of Man or Tingwall here. In the fourteenth century both Shetland and Orkney formally belonged to Norway, although the influence was increasing Scottish. The islands fall under their control by a pawn: the dowry payment guarantees of the daughter of Norway and Denmark king Christian I, Princess Margaret, for her marriage to James III of Scotland. This was never paid, allowing the annexation to the Scottish crown, a process that was ratified by Parliament in Edinburgh in 1472.

At the southern end, past Sumburgh Airport, the Jarlshof ruins show in an extraordinary way how the population has evolved in the islands. It is as a summary from the Neolithic to the sixteenth century. There are Bronze and Iron Ages deposits and a broch and its external enclosure, Norman peasant settlements, a medieval farm and a stately mansion built by order of Count Robert Stewart in 1580. In 1814 Walter Scott was in the area as commissioner for the Northern Lighthouse Service. The Scottish writer was inspired here for his novel The Pirate, and even the place took the name Scott given to the Sumburgh old house: Jarlshof. 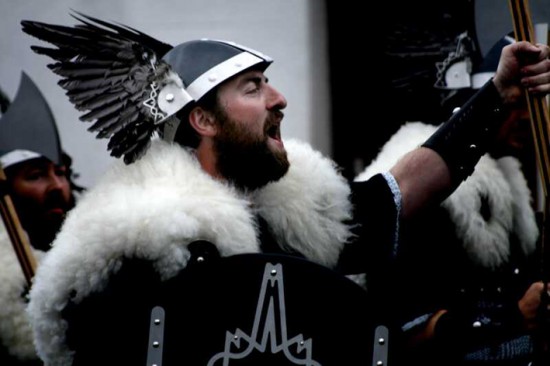 When Walter Scott visited the island, Scalloway was not yet its main city anymore. Overlooking the port, and perhaps already ruinous as was only inhabited for a century, rose the castle built by Patrick Stewart, second Earl of Orkney and recalled despot. Scalloway lost the capital of the archipelago in 1708 in favour of a growing and nearby Lerwick’s harbour.

Edward Charlton was still a medical student when he sailed from Leith, the port of Edinburgh, towards Lerwick. Perhaps was nothing more than coincidence that the schooner was called Magnus Troil, named after one of the main characters in the mentioned Scott’s novel. The future doctor made three journeys to the islands between 1832 and 1852. He left written details in their journals. Others were transformed in watercolours. Among them he made vivid portraits of Mainland and the islands of Yell, Unst and Foula. He also collected specimens of fauna and flora.

Lerwick houses today more than a quarter of the islands population, with surrounding neighbourhoods adds the half. Its harbour, once a swampy bay judging by its original Norwegian name leir vik, is well-protected by the neighbouring island of Bressay. The oldest downtown runs parallel the coast. Here are Commercial Street and the tiny streets linking the port and its Victorian expansion. These streets remind Edinburgh wynds and closes, here named lons and klosses. On plates they have retained former street names. Fort Charlotte is the city stronghold. It, since 1665, defended the city from the Dutch attacks during the sixteenth and seventeenth century’s wars. Rest the walls and barracks. Their doors open and their guns currently devoid of ammo now harmlessly points to the waters of the bay.

In late January, specifically on the last Tuesday, the inhabitants of Lerwick suddenly go mad. They dress up as Viking warriors and parade through the dark and wintry streets carrying hundreds of torches and the replica of a wooden longship Drakkar. Once at harbour they push it into the water and set it on fire with great ceremony. It’s Up Helly Aa. It’s a small and spirited celebration to light up the winter monotony. There’s a smaller replica in June when a brief carnival is held to raise charitable funds. Highland Pipers horned Norman warriors, cowboys and little nymphs parade with their wagons collecting coins thrown by a devoted audience.

Returning to the more prosaic reality provided by figures, 75,000 tonnes of fish catches at sea and farming, along with a huge half million sheep herd round the revenue coming from oil rigs and their operators. Two weekly cruises saturate Lerwick with visitors filling up the streets and encouraging businesses in Commercial Street, sparking a growing tourist demand. Nearly 25,000 people divide, for statistical purposes only, a square kilometre for every fifteen souls. Not so lucky, sheep are a little tighter in an endless coastlines territory where it is impossible to live more than five kilometres away from the sea.

So many coasts are marked out by countless lighthouses. It was not by chance that, before turning to writing adventure novels, Robert Louis Stevenson family suggests him to study Nautical Engineering at the University of Edinburgh. His grandfather Robert Stevenson was lighthouses engineer. Also were his Uncles David and Alan. Either his father, Thomas. They designed lighthouses throughout Scotland. Shetland too: the Sumburgh Head, two in Skerries, in Muckle Fluggs, the Skroo on Fair Island and Esha Ness in Northmavine.

The lands of Mainland, the largest island, are planted with water. Be voe shaped, be in the form of freshwater lakes or streams, or open water or showers.

Northmavine Mainland is a peninsula only connected to the rest by a narrow isthmus, Mavis Grind. Some people presume that it’s easily crossed by a stone throw. Ends in the tip of Fethaland, although their last inhabited village is Isbister, where you can find roadside a red isolated cab as if it were in the very Trafalgar Square in London to the west, Northmavine ends radically in the spectacular Eshaness cliffs, where Stevenson's grandfather lighthouse is still there. Near Stenness, Braewick or Hillswick houses, breakers become accessible to the sea and have turned into pebble beaches.

West Mainland enjoys the reputation of being the sunniest side and seems to be true. It also has shores where the clear waters have nothing to envy, less temperature and coconut trees, to a tropical beach postcard.

To the south, are the most visited archaeological sites, the brochs of Mousa and Burraland, Old Scatness and Jarlshoff, before reaching its end: Sumburgh Head, from where Walter Scott, in the opening pages of The Pirate wrote well known to the mariners who navigate the stormy seas which surrounds the Thule of the ancients, in a cliff of tremendous height, entitled Sumburgh-Head, which presents its bare scalp and naked sides to the weight of a tremendous surge, and forms the extreme point of the isle...

Here between mid-April to late August arrive to nest tens of thousands of birds. The most photographed and most emblematic are puffins, with their curious multicoloured peaks. No missing guillemots, in the distance look like penguins, arctic terns and cormorants.

There are also cats but have nothing to do with the old Cat or Catt men. Abby had one. A cat. The animal I mean. 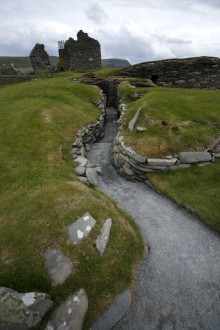 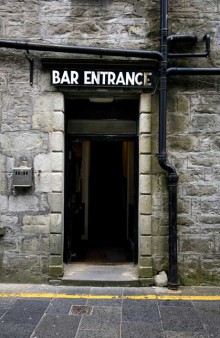