Sometimes I glance over in my living room, a printed cloth I bought a few years ago in a Negombo market. It’s a batik. As time goes by and especially with exposure to light it fades remarkably. Is particularly noticeable on the black inks. 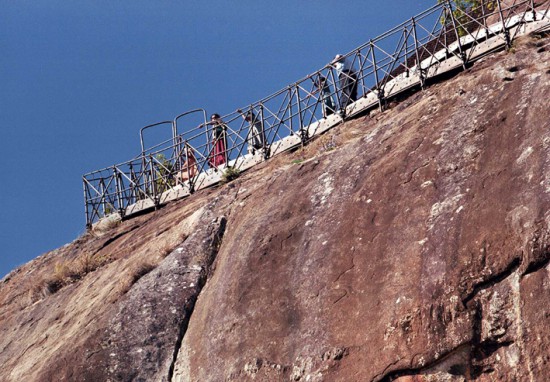 Two graceful richly bejewelled young ladies, compose, from the waist up, a nice aulic scene. Both seem to come from the same social extract, dressed in a semblance alike. One offers to the other a tray of water lilies, she has already taken one holding it in his left hand. Their eyes are lost in space without finding each others look. The scene is modelled on similar, painted in fresco, which are in Sigiriya. 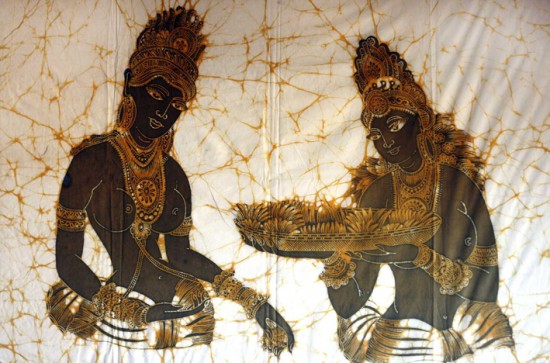 Sigiriya, or Sihagiri, the Lion Rock, is a massive structure, two hundred meters high and with an area of four acres at the top. It’s located halfway ancient capitals of Anuradhapura and Polonnaruwa. Obviously it looks from afar and is unforgettable. Once housed royal palaces and a fortress. According to the Mahavamsa chronicles, primary written source that collects past events on the island, the complex was built by King Kashyapa between the 477 and the 495, after the murder of his father, King Dathu Sena. On the death of Kashayapa, Sigiriya became a Buddhist monastery, which lasted until the fourteenth century. Along Kandy kingdom, in the seventeenth century, and before the English colonization, it was used as advanced outpost. Then oblivion arrived again. It was not until 1831, when British Army Major Jonathan Forbes, assigned to the 78th Highlanders Regiment discovered the ruins in the undergrowth that had covered them over the years. From 1890 would begin the work of archaeologists.

Water gardens extend all over was once the bottom area of the walled city. Before reaching the summit a large esplanade serves as entrance porch through a missing jaws that once were a door. What once was a giant brick lion only legs remain. From here on metal stairs begin an aerial ascent to the top. Halfway, about a hundred feet above the ground, and sheltered by the shade provided by the huge wall inversely inclined, are the Sigiriya Damsels. A huge set of frescoes formerly covering most of the western face of the rock, occupying a space of one hundred forty meters long by about forty high. There are written references to the existence of five hundred damsels in the wall, only twenty one survived. All of them represent scenes similar to those in my batik.

Some scholars believed damsels were members of the court in procession to a temple and that's the reason why they are carrying flowers. Others have claimed that they are Apsaras, celestial nymphs, since they are only represented above their hips, sticking out of the clouds. Whatever they are were painted in the fifth century, during the building of the palace and the fortress.

Also style has been compared to Hindala frescoes painted in the same period of the kingdoms of Anuradhapura. Also with those of Ajanta caves in India. Despite comparisons style is unique. Lines are drawn in a manner protruding volumes, applying further pressure to the air where the paint is applied and providing a greater density in the vicinity of the edges of the drawing. 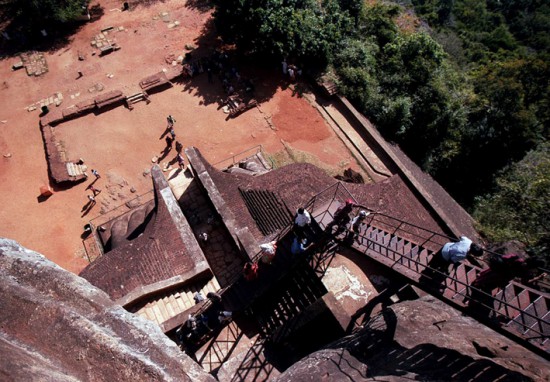 Against the frescos wall is another wall, three meters high, finely polished which allows seeing the frescoes reflected in it. It’s the Mirror Wall. There, hundreds of graffiti in Sanskrit, written between the seventh and eleventh centuries refer to the damsels. Scholars like Dr. Paranavitana have deciphered until one thousand five hundred messages, some as simple and contemporary as I was here and others, more complex verses dedicated to the nymphs:

(Having arrived here, having seen, death no longer disturbs me)

(Kithalu’s song, which came from Ruhunu. He, when thought that those who were separated from their lord were their wives, became doubly happy when saw those who are golden along the mountain)

Of course it’s no longer allowed to add a single line to the ancient graffiti. It’s enough with the contemplation of the nymphs before regaining breath. There’s still one hundred meters to the top, where the palaces once stood and now remain the foundations and a breathtaking view of the region. 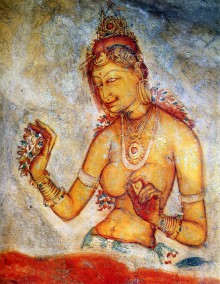 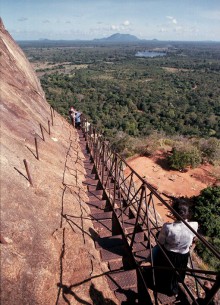