Slovenia isn’t a microstate, but not a large country. On the West goes down from Triglavski National Park mountains, close to the Austrian border along the way of Isonzo River, Soča in Slovene language, bordering Italy. Consequently, the Adriatic coast is a not too long sample, a taste of Istria. 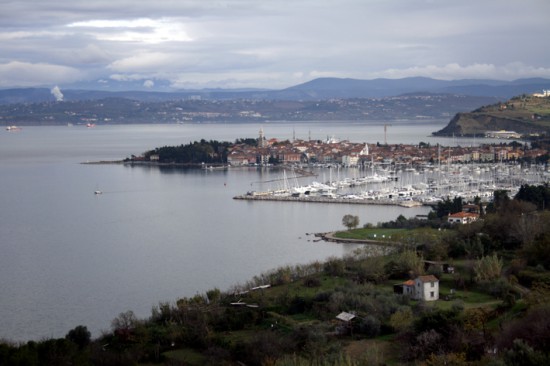 Straight ahead must to be about ten or eleven miles, a little bit more than a sample, the whole perimeter reaches almost thirty, laying there three picturesque northern Istria towns: Koper, Izola and Piran. As in the rest of the peninsula, before the Yugoslavian period, the atmosphere breathed was mainly Italian even with the Austro-Hungarian breaks and the deep roots in the Venetian Republic. So, it’s not uncommon to find Saint Mark Evangelist’s winged lions everywhere.

Once Second World War was over and with the 1954 Treaty of London the coastline known before as the Free Territory of Trieste was split into two sectors. The northern, with the city of Trieste, came under Italian administration. The southern, the Istria coast, came under the Republic of Yugoslavia. Koper and Izola share, as further south other towns of the Dalmatian coast, the fact that were established on islands that finally were merged to mainland, both during the Napoleonic occupation, when walls were demolished and the debris was used to block the channels.

Koper, Capodistria for the Italian-speaking population, with about twenty-five thousand inhabitants, is the largest town and the first one once crossed the border south of Trieste. In its Greek origin was called Aegida. Rome named it Capris and Byzantium Justinopolis. Annexed in the thirteenth century to the Republic of Venice became Koper, and its Italian name is still present because here lies most of the Italian community in Slovenia. Italian is co-official and appears in bilingual signs identifying streets, addresses, businesses and government agencies.

The core of Koper is Titov Trg, Tito Square, concentrating Pretorska Palača, former Venetian governor's mansion, Renaissance filigree charged with battlements. The facade does not lack of the winged lion carved in stone. Next, is Stolnica Marijino Vnebovzetje, the Assumption Cathedral with its bell tower, one hundred twenty feet high, is accessible after ascending two hundred and four steps. The square jewel lays in the beautiful arcaded loggia built by Nicolo da Piran and Tomaso da Venezia. Under the arches there is a pleasant coffee shop where they also serve Laško, the country beer. At the corner of Čevljarska Ulica, Cobblers street, there is a Bocca della Verita, a whistle-blower mailbox so intriguingly Venetian. This street, which has some notable building, leads to Vrata Muda, Muda Gate. It is the only one left of the dozen that gave access to the city through the walls. There’s also the Kolosej, a cinema and a coffee shop. West of Titov Trg, pedestrian Kidričeva Ulica goes to the Marina. Before to reach it, there are several restored Venetian mansions, one of them has a curious chequered façade decorated in red, yellow and white. There is also a plaque commemorating Španski borci, the local militia that participated in the International Brigades who fought on the side of the Republic during the Spanish War, remembering the fight against fascism.

Next to the port is the old Taverna, is not a bar but a fifteenth-century arcaded warehouse where salt was stored. In neighbouring Carpaccio square rises a column dedicated to Sainte Justina, commemorating that the city made ​​a galley for the fleet that in 1571 defeated the Turks at the Battle of Lepanto. Here it is also Cerkev Sv Nikolaja, the church of St. Nicholas, former seat in 1594 for the guild of fishermen and sailors. 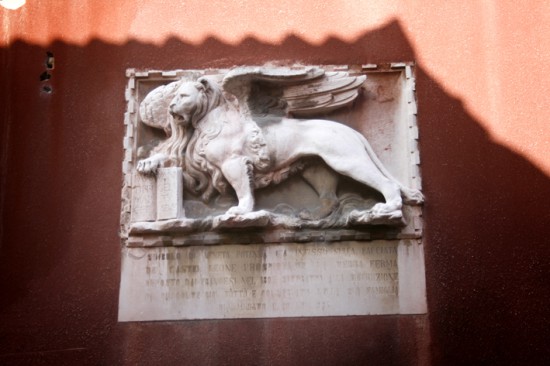 The name of Izola, the next coastal town heading southwards, comes from the Italian Isola, because it was once an island too. Even in Roman times a small harbour was built which was called Haliaetum. When the tide is low enough some of the ruins may be seen.

Despite its somewhat scruffy charm Izola not attract as many visitors as its neighbouring Koper and Piran. Nominally its attractive figure in their ancient buildings, the rococo palace Besenghi degli Ughi, now a music school in Gregorčičeva Ulica, the neogothic Manzioli Venetian mansion, which now houses the offices of the Italian community and in front of it is the church of Sainte Mary Haliaetum, Cerkev Sv Marije Alietska, although the bell tower recognizable in the distance is the one of Župnijska Cerkev Sv Mavra, the parish church of Saint Maurus.

Piran is the southernmost, but it’s Slovenian coast crown jewel. Projected as a sharp sting aimed to the bowels of Jadransko Morjie, the Adriatic Sea. It owes its toponym to the fires that were lit in the tip of the peninsula to guide the Greek ships on their way to Aegida harbour, Koper. The Greek root pyr, fire, resulting in Piranum to the Romans.

Its core is Tartinijev Trg, Tartini Square, which had been an inland port until it was reclaimed from the sea in 1894. Two years later was placed at its centre the statue dedicated to Giuseppe Tartini, the composer and violinist who was born in town. In the background, among row of colourful buildings, stands on a corner a fifteenth century Venetian house here called Beneška Hisa and its construction is attributed to the affairs of a Venice merchant with a piranese heiress. The square share the space with a couple of Saint Mark lions, one in a monolith and the other on the City Hall facade.

Beyond the Venetian house stands out the bell tower of fifteenth century St. George Cathedral, Stolna Cerkev Sv Jurija, although subsequent remodelling would be inspired by the campanile of St Mark's Square. There are Saint Peter church, Cerkev Sv Petra, and the composer’s birthplace where currently concerts are played.

Exploring Piran streets is just like a walk through some neighbourhoods of the city of Venice, up to the May First Square, Trg 1 Maja, downtown core in the Middle Ages before Tartini square was covered. It was called Stari Trg, the Old Square. In the centre is a tank where rainwater was collected.

At the end of the peninsula wisely called Punta, where bonfires were lit there is now a lighthouse as a sign that the times they are a- changin’. 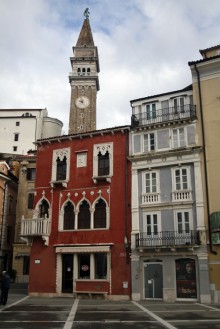