In Denmark and Sweden, as in other Northern Europe regions, old churches progressively replaced by stone buildings, however the tradition of building them out of wood endured in Norway and admirably revived in the 12th century. They are characterized by the lines of their roofs evoking, someway, oriental pagodas with the figures of dragons that stand out in the corners. 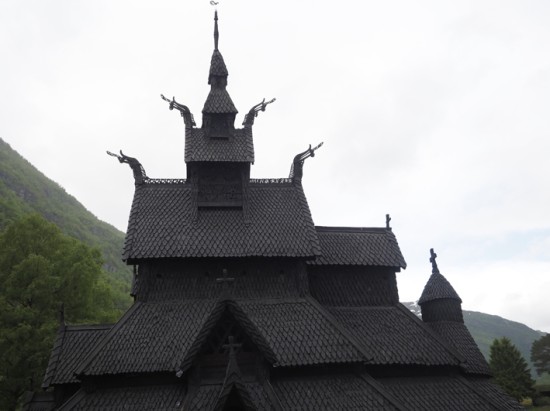 Just in Norway, there are about one and two thousand stave churches, most of them built between the 12th and 14th centuries. Only twenty-eight left standing. They are called stavkirke. Stav refers to the thick wooden posts that support them, kirke does not mean anything else than church. Generally, they have a nave and a choir, and sometimes a perimeter ambulatory that gives them a certain appearance of basilicas. Stepped roofs and decorative overhangs provide the oriental look. Inside, the decorative iconographies are on portals, canopies and fronts and recall Celtic and Romanesque elements, the presence of dragons and lions in woodcarvings is common. Between the years 1650 and 1850, in just two centuries, the number of temples that remained standing decreased from 270 to 60. The limited seating capacity and the introduction of the Reform made it easy to demolish many of them. Others have escaped absolute oblivion thanks to lithographs, drawings and photographs already taken since 19th century on. Another decisive factor in the preservation of those remaining has been the efforts of the Society for the Preservation of Norwegian Antiquites, now the Society for the Preservation of Norwegian Ancient Monuments.

Along the endless route E6, leading from Oslo to Trondheim, are two of the best examples, Ringebu Church and Kvikne Church. Before reaching Ringebu, a town of almost 4,500 people in Oppland, where the waters of the Guddbrandsdalslågen divide on both sides of Oldstadøya Island, it stands up in the middle of the tombstones. The stavkirke, built around 1220 has a plant Greek cross shaped. In 1631, after the Lutheran Reformation, it was enlarged by the builder Werner Olsen and the red bell tower was added, rising from the centre of the transept. The transept opens onto a vestibule leading to the entrance. The doorway, decorated with figures of dragons, belongs to the original church and inside has some remarkable altarpieces. The two floors of sloping roofs surround the central tower crowned by a sharp red spiral that contrasts with the light brown colour of the wood, which predominates, but combines, with the large windows on the first floor. On the walls, you can still see a couple of runic inscriptions and drawings of animals. Recent excavations have uncovered the remains of an earlier temple with traces of the posts driven into the ground, unlike the characteristic structures of the stavkirke, built upon stone blocks to prevent premature rotting of the wooden pillars. During those excavations, a treasure of medieval coins was discovered under the floor of the temple, 892 pieces from the times of King Haakon Haakonsson, some of German and Swedish origin. The stavkirke is still the main church in the town of Ringebu today.

Leaving the E6, cutting through the Østerdalen and Trøndelag mountains on the way to Trondheim, the church in the scattered village of Kvikne stands between the river Orkla and the road, in the province of Hedmark. The stylized and long spire surrounded by the structure, in this case simple, of the temple stands out.

Between Trondheim and Ålesund, almost touching the cold waters of the Rødvenfjord, connected to the Midfjorden before reaching the sea, is the little church of Rødven. It was remodelled in the 17th century, when the old choir and the exterior corridor were demolished, adding a vestibule facing the west. The bell tower stands out from the central body, topped with a hexagonal spire. The southern and eastern walls are propped up. Across the road is the new church, with a colourful and characteristic dark red colour. 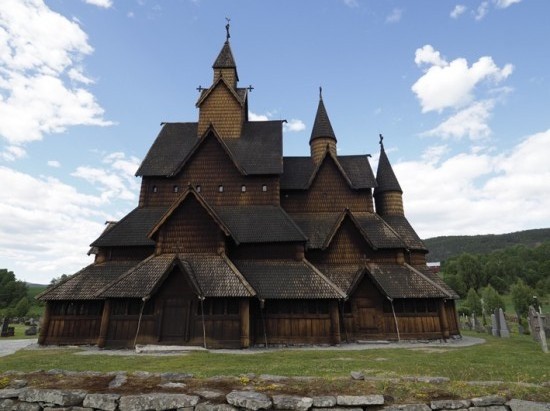 Less than a hundred kilometres south of Bergen, Sognefjorden, the Sogn fjord, is the largest in Norway and, in the world, only surpassed by Scoresby Sound, in Greenland. It goes just over two hundred kilometres into the country, reaching the town of Skjolden, at the bottom of the Lustrafjord, the gateway to the Jotunheimen natural park, the kingdom of the giants in Norse mythology. The name of the fjord, Sogn, means something like aspiring, and refers to the strong currents at the entrance, produced by the great difference in level of the seabed. There, in the mouth it is located one hundred meters below sea level, towards the interior, the fjord reaches depths that exceed one thousand meters. Along the Sognefjorden, the peaks of the mountains are reflected on the specular surface of the waters, and four of the most famous wooden churches peek out, those of Kaupanger, Urnes, Borgund, more hidden in the bottom of the Lærdal valley and the Hopperstad in Røysane.

Kaupanger is near a small bay located almost at the bottom of the fjord. It has three levels of different amplitudes: the roof of the ground floor covers the ambulatory, while the upper one protects the rest of the central nave, from which the bell tower stands out. To the west, a porch protects the entrance. The last restoration carried out, in 1960, removed the whitewash from the walls, leaving the wooden walls visible again. Kaupanger Church has been in continuous use and is still the local parish church.

Crossing to the other side of the Lustrafjord is that of Urnes, with a similar structure, though perhaps a little more stylized. It preserves quite a few medieval elements: beams, windowsills, posts and plates from the corridor wall. It has fine decorations: on a capital there is carved a figure that looks like a centaur, armed with a sword and a shield; in the lower side of the cover a lion bites a snake, illustrating the struggle between good and evil; the intricate and irregular elements carved into one wall are reminiscent of the roots of a tree, perhaps Yggdrasil, which contained the entire Scandinavian mythological world.

On the southern bank of the Sognefjorden, in the Lærdal valley, is the Borgund stavkirke, considered the best preserved of them all and one of the most emblematic and therefore one of the most visited. Moreover, it is worth. Its monumental structure rises in a staggering of six overlapping roofs crowned in the bell tower. There is a roof for the central room, another for the ambulatory, another for the gallery and the remaining three in the tower, which is progressively narrow, all of them made with pine wood tiles. The corners of the upper roofs are decorated with protruding dragonheads and are what give it, with its curvilinear structure, a certain air of an oriental pagoda. The stone ornament on the western door is Romanesque, decorated with vegetal motifs and scenes of dragon fights. On the apse, there is another smaller tower. The church was deconsecrated in 1868, when the new church was built, and in 1877, it was bought by the Society for the Preservation of Ancient Monuments to open to the public. A visitor centre has recently been set up to show the history and building techniques of Norwegian stave churches. 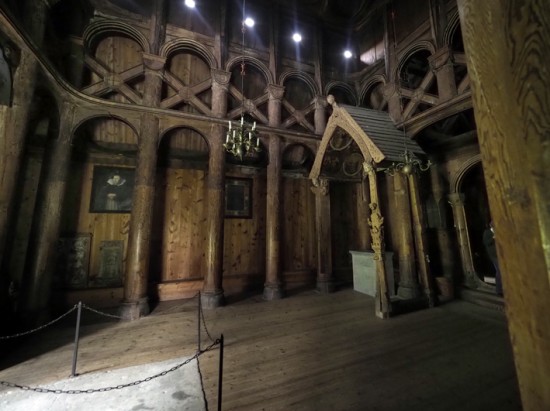 The road leading to Vik and Røysane, on the banks of the same fjord, is a spectacular route of about fifty kilometres. Starting at the Vossevangen turnoff, weave past a couple of small lakes as it heads into the narrow Myrkdalen valley ending in long waterfalls and with the road zigzagging up to the peaks of Vikafjell, where the snow lingers in the Norwegian summer. When the snow turns into fog, the way down towards the course of the fjord begins and, through the clouds, the multicolour houses and the spires of the churches appear. There is the Hopperstad church, which maintained its original shape until the 17th century, when the nave was extended and the bell tower was raised. In the reforms carried out in the 20th century, an attempt was made to recover ancient appearance, imitating, in part, the stepping shape of the Borgund church, including the dragon-shaped ornaments. In the portals, the decoration represent more dragons, these biting each other. Blix was the main architect of the conservation of the temple, since it was about to be demolished in 1877, when the new Vik church was built. Blix purchased the old temple and restored it at his expense. Inside, the canopy is decorated with four clearly Romanesque faces and eight paintings with biblical scenes.

Further south, on the route from Bergen to the Norwegian capital, Oslo, you can visit three other outstanding stavkirke. Those of Uvdal, Rolleg and Heddal, in fact, closer to Oslo than to Bergen. The first, that of Uvdal, more simple than others, has, however, a fine decoration inside, with the walls separating panels of the seats, the central pillar and the ceiling, painted with vegetal motifs. In one of the portals is the legend of Gunnar in the pit of the snakes, playing the harp with the feet, belonging to the Völsung cycle. It is currently deconsecrated and open to the public. Continuing along the same road, more or less parallel to the Numedalslågen River is Rollag, surrounded by forests. Its church is simple, with a rectangular nave and a choir without an apse. At the end of the 17th century, when the transept was added, the floor plan was transformed into a Greek cross. The one at Heddal, near Notodden and its lake, in the Telemark region, is the most spectacular due to its size; it has three bell towers, two of them round and the highest one square. It gives the feeling that they are multiple constructions glued together. On the roofs, very compact, there are crosses and heads of dragons that protrude from the joints of the waters. The church has four entrances with their carved doors and a runic inscription on the outer ambulatory. During the Middle Ages, women entered through the north door, men through the opposite and priests through the choir door. The western portal was used when a baptism was celebrated; this was decorated with figures of snakes and dragons to scare demons, to scare evil with evil, since there was a belief that the devil had power over the unbaptized. On the left column, a grotesque lion representing the Lion of Judah symbolizes Christ's victory over evil; while, in the right column, two bears are fighting each other. Inside there are three medieval pieces of furniture: the bishop's chair, a bench and a lectern, all decorated with motifs related to the myth of Sigurd, Brynhild and Fafnir, the dragon. When you look up, the darkness still allows you to see the twenty-three smiling faces that look out over the choir and the nave.

In Oslo, dependent on the Norwegian People's Museum, is the Gol stavkirke, transferred from that small town in the Buskerud province, 192 kilometres from the capital. Disassembled in 1884, when it was rebuilt, they tried to keep its original appearance. 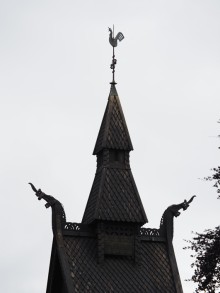 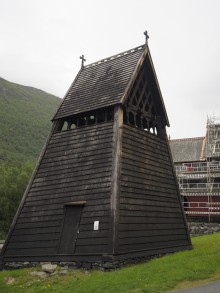